This 'mole' has been lodged in the Martian soil for months. 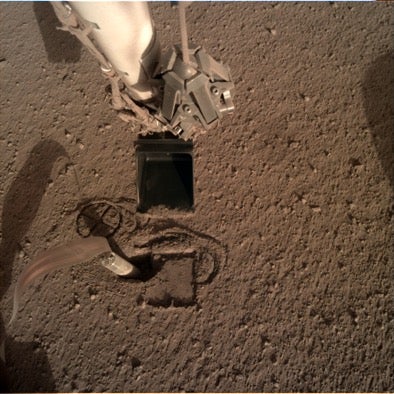 A miniature jackhammer was supposed to be safely buried 15 feet below the Martian surface by now. Instead, it continues to languish near the surface, its nose nestled a foot underground while its tail pokes out two inches above the alien soil.

Many millions of miles away, an international team of engineers has spent the spring and summer analyzing what stopped the digging instrument, nicknamed the “mole,” and improvising solutions to get it burrowing again. This week marks their second major attempt to save the digger, this time by using a robotic arm from the instrument’s mothership—NASA’s InSight Lander—to physically support the mole. While the lander’s other instruments are working as intended, the fate of the mission’s ability to track the flow of heat inside the Red Planet rests on whether the team’s engineering ingenuity can overcome the unknowns of the Martian underground.

“I think the team probably feels that what we’re trying here has our greatest chance of success,” says Matthew Golombek, an InSight coinvestigator who helped select the landing site.

The mole is the business end of one of InSight’s instruments, the Heat Flow and Physical Properties Package (or HP3 for short). Designed by the German Aerospace Center (DLR), the HP3 can measure how much heat flows from Mars’s core to its surface. Much of a planet’s internal heat is left over from its formation, so taking the Red Planet’s internal temperature would help planetary scientists better understand its birth. But to do so accurately, it needs to reach at least nine feet underground, deep enough to escape the seasonal warming and cooling of the surface.

The 15-inch-long, one-inch-wide device is supposed to slip into the Martian soil, pushing aside small rocks with a jackhammer-like up-and-down motion. Communicating with the lander a couple of times per week, the Jet Propulsion Laboratory was to send a series of commands instructing the mole to dig a couple of feet at a time, taking a few days off in between sessions to avoid overheating.

For the first dig, the team programmed the mole to tunnel for either two feet or 4,000 strokes, whichever came first. But when data came back showing that it had executed every stroke without coming close to its target depth, they knew something was wrong—either the mole had snagged on its housing, had encountered weird soil, or was hammering in vain against a giant rock.

DLR and JPL quickly convened an “anomaly response team,” and after months of analysis decided in June to lift the housing with InSight’s robotic arm and look directly at the mole. The lander’s cameras sent back a mixed report: most of the mole had made it into the ground, but it was in no condition to dig further. JPL describes the device as a “self-hammering nail,” and like a nail, it needs to stick firmly into the dirt to make progress. But pictures revealed that the mole had excavated a nearly three-inch wide hole around itself and was leaning against the side at a 15-degree angle. “I along with others from the team were a bit shocked when we saw how large the pit actually is,” wrote Tilman Spohn, the HP3’s principle investigator on a DLR blog.

Rovers have done little more than scratch the surface of Mars, but researchers can see what asteroids have dug up in impact craters. They can also intuit a bit about how the soil (officially, “regolith”) is put together by measuring how quickly it cools off. Decades of data from various missions had led engineers to expect the Martian dirt at this site to be rock-free, and sandy enough to flow and collapse behind the burrowing mole. But the hole around the mole indicates a surprisingly sticky regolith isn’t cooperating. “We have two competing bits of information that don’t exactly agree,” says Golombek.

While they haven’t conclusively ruled out an invisible underground rock, the engineers feel confident that a regolith layer called “duricrust” is troubling the mole. Duricrust forms slowly over time as moisture in the air deposits salts in the soil that glue dirt particles together. The mole can break the duricrust up, but then the soil sticks together like wet sand and keeps its distance rather than falling against the mole and giving it material to push against.

Further evidence for sticky soil came from the first major rescue strategy, which Spohn calls “gardening.” InSight’s recycled arm design inherited a small scoop from a previous mission, which the anomaly team realized they could use to punch down the walls of the hole and give the mole something to push against. Six gardening sessions proved the soil to be even stickier than expected, however. The arm failed to bust through the duricrust, leaving behind only scoop prints in a thin layer of surface sand.

I’ve pressed down next to the “mole” several times, and it’s hard to make this unusual soil collapse into the pit. Soon, I’ll be out of contact for a couple of weeks during solar conjunction, but my team on Earth will keep working it. Keep sending good vibes! ✨ pic.twitter.com/dbUcnXzYzm

DLR engineers considered using the scoop to push sand into the hole, but since the operation would have taken months, they settled on pressing the scoop against the mole directly—a riskier option because one piece of hardware could scuff up the other. “That’s something that JPL engineers get very nervous about,” Spohn says.

After practicing in a sandbox on Earth with full size versions of InSight and the mole, this week NASA commanded the scoop’s arm to sweep sideways, pinning the mole against the wall of the hole and hopefully giving it the pound or so or purchase it needs. Tests in the sandbox have generated between two and 10 pounds of force, according to Troy Hudson, an instrument system engineer at JPL, but how the unprecedented maneuver will play out on Mars is anyone’s guess. “The arm was not built to do this sort of thing,” Golombek says. “We’re totally beyond the playbook here.”

Once the arm has the mole pinned, the digger’s fate comes down to a goldilocks stroke number of 20. Any fewer and it might not burrow at all. Any more, and the mole could disappear underground, letting the scoop’s arm slip over above its tail and hit the fragile data cable connecting it to the lander on the other side. The dig took place on Tuesday, and JPL and DLR engineers will spend the rest of the week analyzing photos for signs of progress.

The anomaly team has a few more tricks up its sleeve if the mole refuses to budge, such as a risky downward press with the scoop directly on the mole’s tail, but there’s a sense that the current rescue attempt could be the defining moment in the mole’s mission. Accordingly, engineers have steeled themselves for either outcome.

“If it ultimately fails that’s going to be crushing,” says Hudson, “but I think I’ve processed a lot of that grief already. Ever since the anomaly happened, the specter has loomed that it’s not going to work.”

As the engineers repeatedly hit refresh while waiting for images to reach Earth, they hope for signs of modest burrowing, the mole’s exposed tail shrinking from two inches to one inch. But even in that best-case scenario, the mole wouldn’t quite be out of the woods. Next, the team would need to decide if the extra depth granted enough purchase to start digging, or whether they’ll need to do some more gardening and fill in the hole behind it.

“While it would be excellent that the mole made progress,” Spohn says, “it will not be the end of the story.”