NASA’s next mission will give us InSight into Mars’ interior

InSight is blasting off this week. 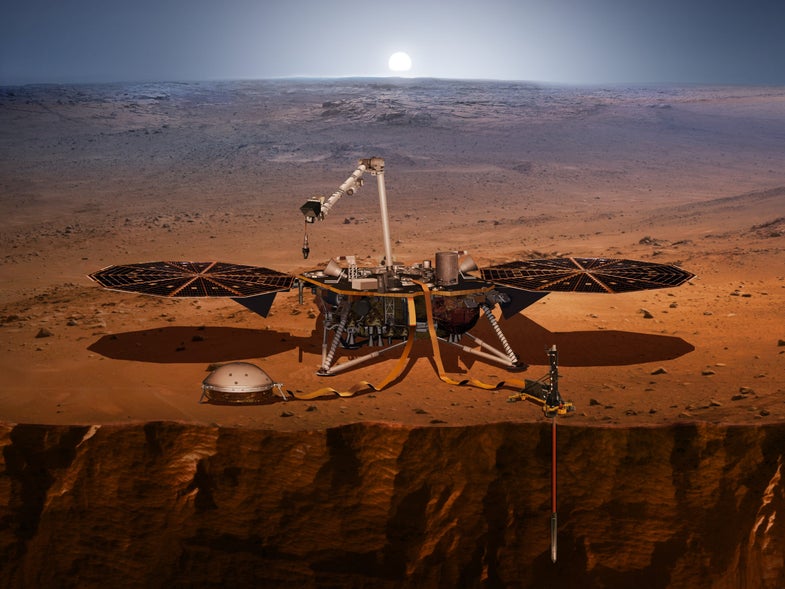 Of all the wonders in our solar system, there’s no place beyond our own planet that’s been studied more intensely than Mars. Since humans first took to the stars we’ve sent over 21 different spacecraft to study our rust-colored neighbor. Right now there are two rovers driving around inside of craters, and six satellites overhead. But all of this activity still isn’t enough—Mars is about to get one more resident.

In about a week NASA will launch a lander called InSight. This will be the first lander to touch down on the dusty surface in ten years since the Phoenix lander touched down near the north polar cap in 2008. Unlike the recent Curiosity rover, landers like InSight and Phoenix don’t rove around the planet. Instead, they explore their surroundings firmly planted in the place they landed.

While Mars has garnered attention for decades, there’s still a lot about it we don’t know. We know it has a core, but scientists are unsure how big it is or what it’s made of. It could be small and dense—made up of iron and nickel like our own core, or larger and made of several types of materials. Mars is often referred to as a dead planet, but it’s actually pretty active. It had active volcanoes just 50-100 million years ago, relatively recently in geologic terms, and researchers would love to know more about how they formed, and why they stopped erupting.

“Everything we’re doing with InSight is trying to understand how Mars formed and evolved,” says Mark Panning, co-investigator for the InSight mission. “In order to piece together the whole picture about how the terrestrial planets formed, we need to understand this basic part of Mars and its history.” InSight’s mission is to see below the surface of Mars to solve these big mysteries and that means it’s traveling with some highly specialized equipment.

InSight will land in a region called Elysium Planitia, just a bit north from where the Curiosity rover roams. Once it lands, it will spend two months using its robotic arm to place its scientific instruments on the surface, the most sensitive one being the specially made seismometer. This isn’t just any seismometer, like those measuring earthquakes in California; this instrument is so sensitive that it can measure the movement of the ground by the distance of single atoms. If Mars quakes even an atoms distance-worth, InSight will catch it.

Next it will deploy its HP3 instrument which will hammer up to 16 feet into ground. HP3 is essentially a large thermometer that will stay in the soil for a full Martian year, or two Earth years. As Mars orbits the sun, the HP3 will monitor the flux of the the interior temperature of Mars.

Understanding the interior movements and heat levels of the inside of Mars can tell us a lot about how active Mars really is—and clue us into its history. There might be hot magma still flowing far down below the crust of the planet, or there could even still be signatures of active volcanoes. Team members refer to Mars as a “goldilocks” planet because it’s bigger than the moon but smaller than the Earth. The moon lost a lot of its heat early on while the Earth has retained a lot. Our planet is so active that the plate tectonics, volcanoes, and other geologic processes produced by this internal heat continuously erase the records from the earth’s very early history. Activity like this is driven by heat wanting to escape from the depths of a planet’s core. Mars lies somewhere between our own planets liveliness, and our small inactive moon, which makes it a great place to better understand the differences and similarities of small rocky bodies in our inner solar system.

Not only will InSight be the first spacecraft designed to study the interior of Mars, but it’s making history in a different way. For the first time, NASA has designed two cubesats, miniature satellites (about the size of a briefcase) to travel alongside InSight during it’s trip to Mars during which they will serve as communication relays. Once in orbit around the planet, hey will bear witness to InSight’s entry into the atmosphere pinging back data to NASA’s Deep Space Network, letting the mission team know the status of the landing process. This teamwork and long journey will give the MarCo cubesats the title holder for the first interplanetary cubesats ever launched into space. If this relay works the way the team hopes, it could change how planetary missions communicate during dangerous atmospheric entries in the future. Usually, spacecraft entering the atmosphere depend on the larger satellites for communication relays, but they only work once a spacecraft are at the planet. Cubesats like MarCo can track and update the mission along the way, adding a level of insurance to a mission.

Assuming all goes well with the launch and landing, InSight could give us a unique perspective into the famous planet next door. Not long after landing scientists will begin to piece together some of the biggest mysteries of red planet and in doing so help us learn more about our own place in the solar system.

When Does It Launch?

The launch window officially opens May 5th at 4:05 am PT. InSight will launch from Vandenberg Air Force Base in California, making it the first planetary mission launched from the West Coast. The spacecraft will travel for six months to Mars where it’s due to land in Elysium Planitia on November 26th of this year.