What Cataclysm Killed the Birds in Arkansas (and Louisiana, and Sweden)? Maybe None

If 5,000 birds die in a forest and no one is around to find them, does it still become a media sensation? 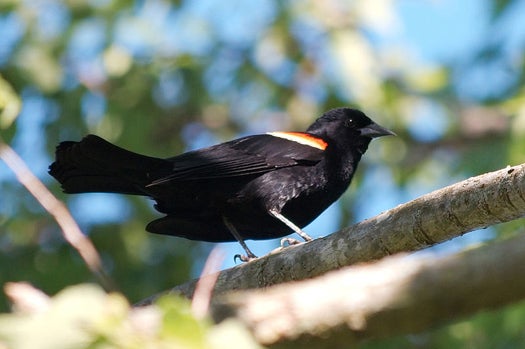 When 5,000 dead red-winged blackbirds dropped from the sky in Beebe, Ark., on New Year’s Eve, ornithologists were puzzled and witnesses were understandably unsettled. But when another 500 birds were found littering a stretch of asphalt in Louisiana three days later, the media started connecting dots between the incidents as well as 85,000 drum fish found dead in the Arkansas River the day before (since then, mass fish deaths have made headlines in the Chesapeake Bay, Brazil, and New Zealand).

Then more “bird death events” emerged: Kentucky, Sweden, Texas – anywhere a handful of birds turned up dead, another thread in the great bird death mystery of 2011 was spun. The conspiracy theorizing and outlandish fear mongering kicked into high gear.

Initial reports on the Beebe deaths blamed the weather, the usual culprit in such events. But there were other ideas: poisons, toxins, some kind of avian virus (bird flu!). A comment thread on this site fielded theories ranging from disruptions in Earth’s magnetism to radiation bursts to secret government weapons. Aliens or Monsanto may have killed the birds, according to some.

And why not? Events like the mass bird mortality in Beebe are strange, though not impossible. Over the past three decades the U.S. Geological Survey has only recorded 16 mass bird death events (involving more than 1,000 birds). But it does happen – probably far more than we know. The number of birds that die in mass events in the wild is unknown.

Consider this: According to the U.S. Fish and Wildlife Service, anywhere from 100 million to one billion birds die each year from collisions with windows alone (communications towers and power lines claim countless more). Cars kill tens of millions of birds. Cats – both feral and domestic – probably do in hundreds of millions more. And that’s just in North America.

In other words, birds die all the time. But in such huge numbers, in such a short span of time, while on the wing? Even the experts agree that it’s bizarre.

“I wouldn’t say events like this are common by any means,” says Dr. Douglas Stotz, a conservations ornithologist at the Field Museum in Chicago. “But there are plenty of records of these kinds of things out there.”

It’s true. In 2009, hundreds of birds rained downrained down on Perth, Australia, just a year after 200 gulls dropped dead from the skies over nearby Esperance; the cause, in both cases, toxins (Three weeks after the Esperance event a few dozen assorted birds died in Austin, Tex., in what was portrayed by some as a cosmically connected event. Unsurprisingly, no link was established).

In March of last year, 75 starlings turned up dead – bashed to death, it seemed – in a tight cluster on a driveway in Coxley, England. Cause of death: miscalculation. After investigating, experts concluded the birds either took an evasive maneuver to avoid a predator and crashed into the driveway or mistook the patina of the concrete for a bed of reeds and came in too fast (the black box was never recovered).

But the Arkansas event (as well as the one in Louisiana, though less is known about it at this point) is still peculiar in several aspects. The birds all seemed to die rather quickly (within the span of roughly an hour according to reports) and in a relatively small area. Weather, a usual culprit in these kinds of events, seemed unlikely, as storms in the area had moved out hours earlier.

So what realistically killed the birds over Beebe (and Louisiana, and Kentucky, and Sweden)? As far as foul play is concerned Dr. Douglas Robinson Jr., assistant professor of biology at Mount Saint Mary College, will go so far as to suggest murder. “The fact that farmers can obtain avicides without permits raises the possibility that someone might have had it out for some of these birds,” he says. “The lab results should show whether or not that was the case.”

But the forensic scientist in Robinson doesn’t believe poison was to blame in Beebe – poisons make birds sick, and sick birds tend to die on the perch rather than on the wing, nor do they tend to die all at once. This point of fact also reduces the likelihood that avian disease ravaged the birds.

“People see this and they think of things like the movie Outbreak where you’ve got some fast-acting disease that kills everything all at once,” Stotz says. “I’m sure in these big roosts there are outbreaks of disease, but the way these birds were found doesn’t fit that. It happened in the space of half an hour or something.”

Scientific analysis also points away from a chemical cause of death. Yesterday the Arkansas Game and Fish Commission released its most recent assessment of the Beebe situation, saying initial analysis shows the birds died of blunt force trauma. The USGS, which has performed full necropsies on some of the birds, has found nothing to refute this. Paul Slota at the USGS National Wildlife Health Center says preliminary examinations have found no sign of poisons (though analysis is ongoing) and that it appears the birds ran into something while in flight.

But Beebe lacks an abundance of the tall, glassy structures usually associated with flock decimations. One theory: they could’ve collided with other birds.

“I don’t think it’s impossible that they were running into each other,” Stotz says, noting that this would be unusual. “They may have been scared off the roost in dead of night with their vision reduced and run into almost anything, including each other.”

Dan Cristol, a biology professor and co-founder of the Institute for Integrative Bird Behavior Studies at the College of William & Mary, thinks it more likely they ran into something solid, likely a man-made structure of some kind. “Colliding with each other seems unlikely because that would lead to broken wings and broken legs,” he says. “Additional bones and beaks could break when they hit the ground. But some of these birds showed massive trauma.”

Robinson is reluctant to wager on a specific cause of death, but doesn’t think it will surprise us when we find out. “It’s probably nothing out of the ordinary in terms of things that might kill birds,” he says. “It could be avicide, it could be a disease raging through this particular flock, but again if the birds were sick you wouldn’t see this odd distribution of birds.” All signs currently point to a collision in flight, he says. That in and of itself is an unremarkable way for birds to die.

Among the experts interviewed for this article, the consensus seems to be that the birds in both Arkansas and Louisiana were scared or otherwise dislodged from their roosts (the catalyst could’ve been just about anything: New Year’s Eve fireworks, a predator, people, a weather event, a train, etc.) and were flying in conditions where they couldn’t see, and that led to the trauma. But on one point they are very clear: the likelihood of the Arkansas deaths being linked to the Louisiana deaths (or the Kentucky deaths, or the Sweden deaths) is extremely low.

“The fact that two of these events occurred certainly is weird,” Robinson says. “If it only happened once it might’ve made the news. Now that there are two events, no one’s quite sure what’s going on. But there are a large number of birds that will die in this region at this time of year because there are so may birds down there.”

As many as a quarter and sometimes half of red-winged blackbirds don’t survive the year, Stotz says. Given the season, they are heavily concentrated in the American south right now. So while the nature of the Beebe deaths is somewhat mysterious, the number of dead birds in the last week isn’t necessarily statistically significant.

“There are hundreds of millions of blackbirds roosting every night in the southern United States,” Cristol says. “Statistically it’s not hard to imagine 500 blackbirds hitting a power line in Louisiana because tens of thousands are flying by and they can’t see it.”

Perhaps the bigger story here is the Internet’s ability to connect disparate events, which is both good and bad. It has brought awareness to the story, sure, but it has also led to rampant speculation and misinformation. The bird deaths in Arkansas, Louisiana, and elsewhere are likely unrelated – though the toxicology studies are ongoing and new information may still emerge. We may never conclusively know what happened.

As for all the dead fish?

“I guarantee the fish kills are unrelated; Those things are extremely common,” Cristol says. “The real meta-phenomenon here is what’s happening with the Internet and the news media: the phenomenon of linking. Ten years ago this kind of thing wouldn’t be such a big deal. But at the same time we shouldn’t lose sight of the fact that there is a lesson here about ecology. When you crowd these birds into where people are, they’re not equipped to survive. It’s generally man-made structures that are killing these birds, so we don’t want to be too cavalier and say ‘oh, this happens all the time.’ There is a real problem.”