The State of Science and Tech: What We Futurephiles Should Expect From Tonight’s SotU

Expect to hear about clean energy, sci/tech education, and more 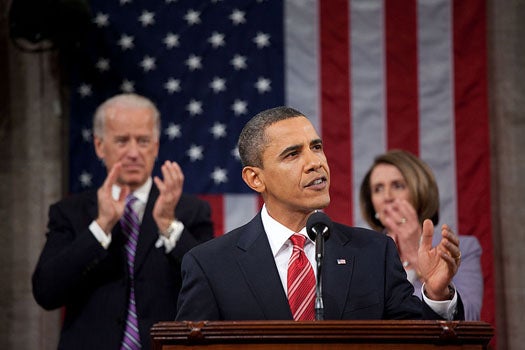 Since you must be currently plugged into the information tubes to be reading this, it’s safe to assume you’re also aware that President Obama will deliver the President’s annual State of the Union address tonight at 9 p.m. EST. While the SOTU is often a list of achievements made in the past year, a to-do list for the coming year, and a big-language pep talk, this year’s is supposedly going to be focused on upcoming challenges. Many of those are economic, but many also tie directly into science and technology (with at least a dash of defense).

So what should the sci/tech-conscious citizen be looking for from President Obama in tonight’s speech?

An Emphasis on Technology It’s lost on no one these days, least of all President Obama, that America’s manufacturing sector is shrinking and the future economy relies on science and technology. The problem is, research and development aren’t exactly growing like gangbusters, either. To emphasize her husband’s visions for a technologically driven future, the First Lady has invited four young innovators—high school and community college students that have been recognized for their achievements in science—that will sit with her during the address. Expect Obama to also mention GE CEO Jeff Immelt, whom the President recently signed on to lead the new Council on Jobs and Competitiveness (in this case, “competitiveness” equals “technology”). Which brings us to our next point:

(Another) Commitment To a Clean Energy Jobs and Technology Green jobs and a clean tech economy were the bulwarks of Obama’s 2008 campaign, but thus far his supporters haven’t seen much of that talk bearing fruit (or jobs, for that matter). In 2008 he promised $150 billion over ten years for clean energy initiatives, and seeing as how tonight marks the informal beginning of Obama’s 2012 incumbent run for the White House, expect him to talk at some length about investing in our green energy future once again.

Cutting Defense There’s no doubt that if Obama and company are serious about cutting spending, defense has to be on the table. That means trimming waste, sure, but it also means some of those outlandish, blue-sky technology programs that defense wonks so love might get the axe as well. Naturally, Obama won’t talk specific programs tonight, but he is expected to push for a two year extension of the three-year partial freeze in spending on domestic programs, and will ask for a further $78 billion to be carved out military budgets. Sorry to say, but that could slow delivery of your flying car.

That Doesn’t Really Bode Well for Space (or Florida) Legislators from the Space Coast want the President to take a firm stand behind America’s space ambitions, but they likely won’t get it tonight. Obama may make some passing references to the space program as it pertains to his commitment to science and technology, but (and perhaps this is contradictory) he likely won’t make any financial commitments to the program or produce something akin to John F. Kennedy’s 1962 inaugural address (in which we resolved to go to the moon).

So what’s the good news in this year’s SotU address? We should get a renewed commitment to science and technology in education and research and development in our economy. Help stimulate the economy by picking up a good American six-pack, sitting down and tuning in. Call it your patriotic duty.

The SotU can be watched on TV, or you can catch an “enhanced” version, accompanied by various charts and figures, on Whitehouse.gov.