If you’re going to build the world’s biggest megatropolis in the world’s most populous country, you don’t start from scratch.... 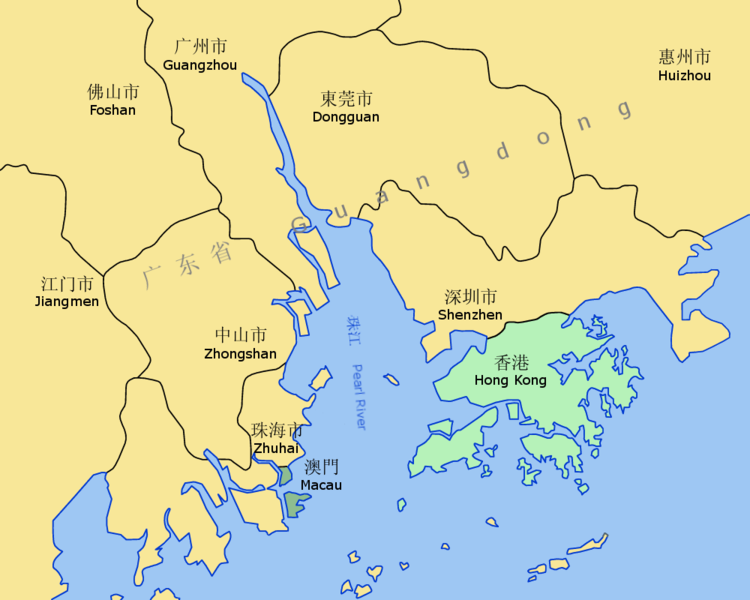 The new super-city will take in all the cities above (excepting Macau and Hong Kong), as well as Zhaoqing (due West of Foshan but out of frame. Croquant via Wikimedia
SHARE

If you’re going to build the world’s biggest megatropolis in the world’s most populous country, you don’t start from scratch. You take nine existing population centers and merge them. At least, that’s the thinking behind the “Turn the Pearl River Delta Into One” initiative, which aims to do exactly that. Merging nine cities, China plans to create a 16,000-square-mile urban swath populated by 42 million people in the southeast near Hong Kong.

In terms of geography, the new mega-city will be roughly twice as big as New Jersey. More than 150 infrastructure projects costing some $300 billion will link the nine cities together over the next six years, reducing redundancies and bringing nearly ten percent of China’s economy under a single umbrella.

The idea isn’t just to create another superlative for the People’s Republic, but to make things more efficient for people living in China’s manufacturing heartland. Stretching from Guangzhou to Shenzhen, the as-yet unnamed megasprawl will also include Zhongshan, Zhuhai, Huizhou, Jiangmen, Zhaoqing, Dongguan, and Foshan. The cities, all cultural and industrial neighbors, share little common infrastructure or regulation, and merging them will simplify both governing the region and the lives of its inhabitants.

For instance, the project aims to add 29 rail lines (31,000 miles of track) linking the cities on which riders can use a single fare card. Hospitals and schools will be improved and, according to planners, residents will have more choice in where they receive public services like medical care. It will also drive living costs down by merging water, energy, and telecommunications in the region. Moreover, as industry and jobs spread more evenly across the region its leaders can institute more uniform environmental regulations, which are currently piecemeal.

Of course, an ambitious Chinese infrastructure plan would be nothing without staggering high-speed rail investments; the Pearl River Plan will link the region such that each current city center can reach any other in an hour (an express line will also link the mega-city to the nearby financial and commercial hub of Hong Kong).

However, all that rail (and distance) between city centers makes it seem like this is less a single mega-city and more like highly controlled urban sprawl. Then again, perhaps the super-city of the future has no “downtown” as we’ve come to know it, but rather is a more uniform dispersal of people and commerce connected by high-speed transit and higher-speed communications networks.

If that’s the case, China has yet another head start on the U.S., as it is sprawling like crazy; China’s cities are adding people by the tens of millions, swelling into urban zones that could host up to a quarter billion people each in coming decades. You can’t get all those people into one Manhattan, but you can certainly fit them into two New Jerseys.