Frogs in Peril: A Race to Save a Threatened Frog With Risky Experimental Techniques 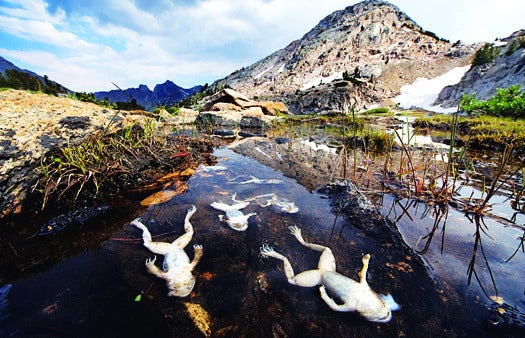 For years, every time Vance Vredenburg visited his study area in Kings Canyon National Park in California, he tallied about 100 Sierra Nevada yellow-legged frogs. But in 2005, all the San Francisco State University biologist found were 30 carcasses floating in a lake. Most of the park’s 10,000 frogs had fallen victim to chytrid, a disease that’s the biggest threat to vertebrate biodiversity in history. This summer, Vredenburg returned to the area with plastic tubs full of a bacterial species that might save both this frog and other amphibians around the world.

Chytrid is caused by the fungus Batrachochytrium dendrobatidis, which interferes with an amphibian’s ability to breathe and regulate fluid. No one knows where it came from, but over the past decade it has extinguished 200 of the 6,600 amphibian species found world-wide, and threatens another third. The fungus kills quickly, in some cases wiping out more than 90 percent of an amphibian population within a year.

In the race to find a cure, scientists are turning to an unusual source: amphibian skin. In 2009, biologist Reid Harris of James Madison University and his colleagues discovered that the bacteria Janthinobacterium lividum, found on some yellow-legged frogs’ skin, kills the chytrid fungus. to boost this natural protection in frogs, the scientists developed a “bioaugmenting” technique, bathing the amphibians in the bacteria. In laboratory tests, the bacteria conferred full immunity against the chytrid fungus.

Encouraged by these results, Vredenburg wanted to see if the technique would work in the wild. He received rare approval from the national park service to perform an experiment in Kings Canyon, bathing 80 yellow-legged frogs in the protective bacteria and then releasing them. As of last fall, a preliminary rough analysis of data shows that that those treated had about one tenth the fungus levels of those that weren’t. Vredenburg will return this spring to see if the resistance lasts. “If this works,” he says, “it could save hundreds of species.”

The bioaugmenting technique could work well with the many amphibian species already colonized with low levels of the bacteria. But what about species that lack anti-chytrid bacteria? Saving these animals might mean transferring bacteria between species, and that is a riskier endeavor. Scientists generally warn against introducing non-native species to a new environment, and some believe that moving a bacteria from one frog species to another could be disastrous. In a worst- case scenario, the bacteria could kill other fungi that plants need to survive, destroying the ecosystem and its amphibian residents too.

But many scientists, such as biologist Matthew Becker, who is working to save the Panamanian golden frog, believe that the potential benefits might outweigh the risks. Amphibians play a critical role in connecting freshwater and terrestrial habitats, and they hunt disease-carrying insects. They also produce compounds on their skin that could lead to drugs against HIV and other pathogens.

Becker, a biologist at Virginia Tech, is now using bioaugmentation to try to save the Panamanian golden frog, which is thought to exist only in captivity. The golden frog would die if sent back to its chytrid-tainted home, says Becker. But instead of colonizing it with
J. lividum, which is native only to temperate regions, Becker collected 440 samples from closely related Panamanian amphibians and is testing them to find new bacterial strains native to the area. The hope is that using a bacteria from a similar amphibian will minimize any adverse effects when the animal is reintroduced to its natural habitat.

It’s a race, a matter of striking a balance between the meticulous lab work needed to ensure safety and rescuing frogs before it’s too late. “It made me incredibly nervous to be there with these petri dishes of bacteria. Ideally, I’d do this five years from now after extensive lab studies,” Vredenburg says. “But by then, all my frogs would be extinct.”