Graphene is widely regarded as the electronics material of the future, but in an article published over the weekend in... 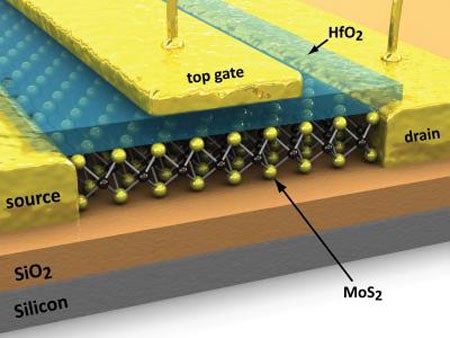 Graphene is widely regarded as the electronics material of the future, but in an article published over the weekend in the journal Nature Nanotechnology, a group from EPFL’s Laboratory of Nanoscale Electronics and Structures (LANES) describes how the abundant mineral molybdenite (MoS2) is a very effective semiconductor with advantages over both graphene and silicon. The discovery could allow for transistors that are smaller and orders of magnitude more efficient.

Molybdenite is already used as an additive to lubricants and in some steel alloys, but it previously had not been thoroughly examined for electronic properties. Compared with silicon, the current standard material used in electronics and chip technology, and graphene, molybdenite enjoys some serious selling points.

For one, molybdenite is a two-dimensional material, meaning it is less voluminous than three-dimensional silicon. Electrons can move around as freely in a 0.65-nanometer-thick sheet of molybdenite as they can in a 2-nanometer-thick layer of silicon, ostensibly requiring roughly one third the space to accomplish similar ends. It also possesses an ideal “gap” for turning transistors on and off, meaning a transistor with molybdenite’s 1.8 electron-volt gap could consume 100,000 times less energy than its silicon counterpart.

Further, molybdenite contains the necessary band gap needed to control semiconductors’ material properties. Electron-free spaces between these “band gaps” that allow certain electrons to leap across lend a greater level of control over a material’s electrical properties. Molybdenite has this gap. Graphene does not, making it less-than-ideal for transistor applications

Does this mean our new molybdenite electronics will consume 1/100,000th energy of silicon chips or that graphene (the discovery of which was recognized with a Nobel prize last year) electronics are finished? Absolutely not. But the discovery does show that there’s more than one way, or even two ways, to build the transistors of the future. Molybdenite, based on its small volume and high efficiency, could be particularly useful as a component for future nano-electronic devices.