Good science is always rooted in good data, but the most entertaining science is the stuff that transcends the need... 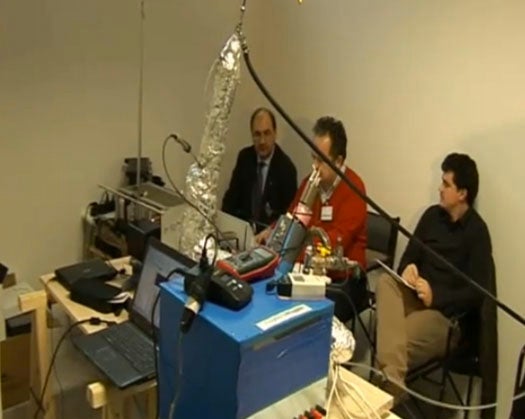 Good science is always rooted in good data, but the most entertaining science is the stuff that transcends the need for data by rooting itself fantastical claims and a rejection of the idea that data is even necessary. So naturally it’s a thrill to learn that two Italian scientists claim to have successfully developed a cold fusion reactor that produces 12,400 watts of heat power per 400 watts of input. Not only that, but they’ll be commercially available in just three months. Maybe.

Andrea Rossi and Sergio Focardi claim to have done exactly that. Their reactor, they claim, fuses atomic nuclei of nickel and hydrogen using about 1,000 watts of electricity which, after a few minutes, is reduced to an input of just 400 watts. This reaction purportedly can turn 292 grams of 68 degree water to turbine-turning steam – a process that would normally require 12,400 watts of electricity, netting them a power gain of about 12,000 watts. They say that commercially-scaled their process could generate eight units of output per unit of input and would cost roughly one penny per kilowatt-hour, drastically cheaper than your average coal plant.

The problem is, they haven’t provided any details on how the process works. After their paper was rejected by several peer reviewed scientific journals, it was published in the Journal of Nuclear Physics—an online journal apparently founded by Rossi and Focardi. Further, they say they can’t account for how the cold fusion is triggered, fostering deep skepticism from others in the scientific community.

Based on this lack of even a theoretical basis for the device’s function, a patent application was rejected. Their credibility isn’t helped by the fact that Rossi apparently has something of a rap sheet, which allegedly includes illegally importing gold and tax fraud.

But the duo does have something going for them in the fact that they’ve demonstrated their device publicly. In a press conference last week they fired up their reactor and, if the video evidence and reports are to be believed, generated some power. Whether or not they achieved cold fusion is unclear, but other physicists present confirmed that electricity was produced.

It’s anyone’s guess what’s really going on with this bizarre story, but should it turn out Rossi and Focardi have achieved true cold fusion you’ll hear more about it here—and everywhere else.

You can catch a glimpse of their setup in the video below, though a lack of English subtitles makes the full nature of the press conference difficult to parse. If you speak the language and can lend some insight, please do so in the comments.