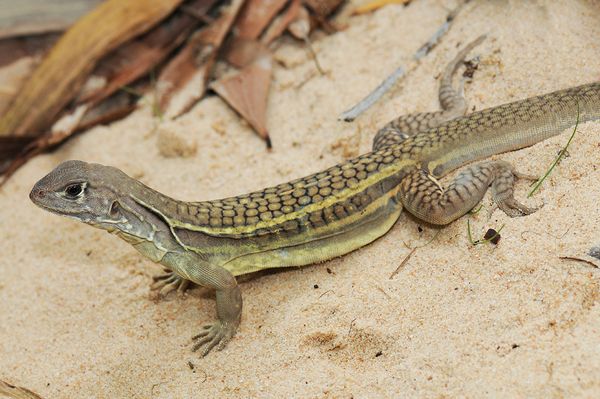 A curiosity and a delicacy. L. Lee Grismer
SHARE

Leiolepis ngovantrii, a smallish agamid lizard native to southeast Asia, is the newest species of the Leiolepis genus to be discovered, in fact only coming to official taxonomic light earlier this year, according to National Geographic. As an all-female species that reproduces by self-cloning, it’s definitely a peculiar critter. As a lizard that was discovered in a tank in a Vietnamese restaurant–and almost lost when “a crazy guy” drunkenly ordered them for all his friends–it’s an amazing anecdote.

Leiolepis ngovantrii was discovered when a Vietnamese scientist noticed a tank of surprisingly similar-looking lizards in a southern Vietnam restaurant. The Leiolepis lizard exhibits very different colors in male and female specimens, so the fact that every single lizard appeared to be female was a clue that these might not be your run-of-the-mill Leiolepis.

In fact, Leiolepis ngovantrii turned out to be one of a few Leiolepis species that reproduces by parthenogenesis, in which a female can produce a sort of natural clone offspring without the need for a male. It’s not quite the same as an artificial clone, in which the clone has the exact same genetic footprint as the parent–a parthenogenic Leiolepis ngovantrii offspring is capable of giving birth itself and has a different genetic code than its parent. This is uncommon but not unheard-of in lizards, fish, and many invertebrates. In lizards, it’s usually the result of a lizard from one specific environment mating with a lizard from an adjacent but very different environment–in this case, coastal sand dunes and scrubland.

This Vietnamese scientist sent pictures to herpetologist L. Lee Grismer, who flew to Vietnam to help identify the lizard. After a long plane ride and an eight-hour motorcycle ride out to the restaurant, they found that the lizards were all gone. Said Grismer, “When we finally got there, this crazy guy had gotten drunk and served them all to his customers.” (After all, we know how appealing exotic meats are.) Luckily, the lizard is not at all rare in that part of Vietnam, and they managed to secure about 70 specimens both from local restaurants and through the efforts of local schoolchildren, recruited to find wild lizards. Leiolepis ngovantrii may not be around for very long–the lack of diversity in the gene pool means that single-sex species tend not to survive in the long-term. But for now, it appears to be both thriving and delicious.