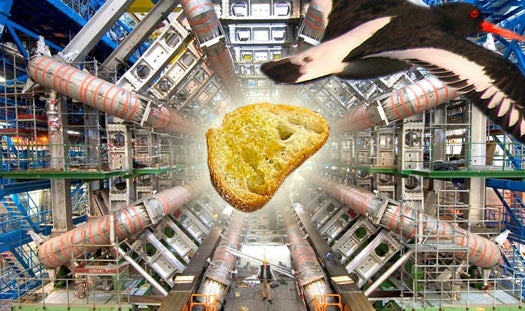 Re-enacted according to eyewitness accounts.

The Large Hadron Collider, the world’s most powerful particle accelerator, just cannot catch a break. First, a coolant leak destroyed some of the magnets that guide the energy beam. Then LHC officials postponed the restart of the machine to add additional safety features. Now, a bird dropping a piece of bread on a section of the accelerator has, according to the Register, shut down the whole operation.

The bird dropped some bread on a section of outdoor machinery, eventually leading to significant over heating in parts of the accelerator. The LHC was not operational at the time of the incident, but the spike produced so much heat that had the beam been on, automatic failsafes would have shut down the machine.

This incident won’t delay the reactivation of the facility later this month, but exposes yet another vulnerability of the what might be the most complex machine ever built. With freak accident after freak accident piling up over at CERN, the idea of time traveling particles returning from the future to prevent their own discovery is beginning to seem less and less far fetched.