Neurons in the brains of pigeons encode the direction of Earth’s magnetic field, endowing the birds with an innate internal... 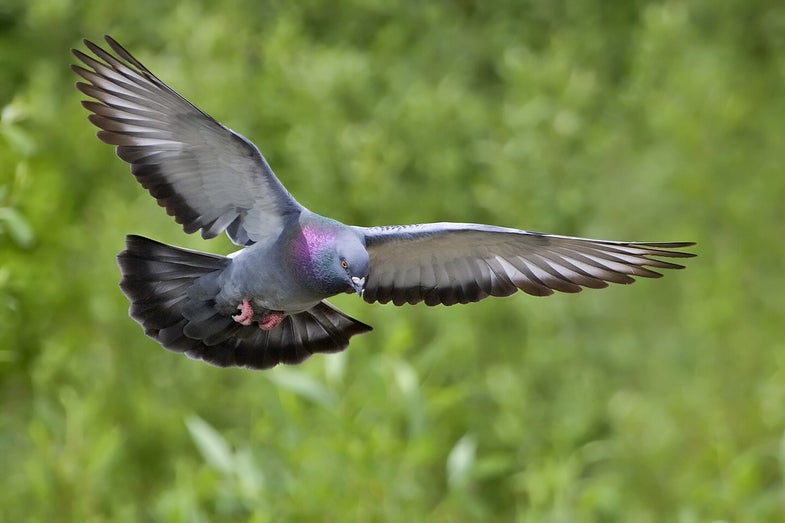 Neurons in the brains of pigeons encode the direction of Earth’s magnetic field, endowing the birds with an innate internal GPS system, according to a new study. Scientists have long known internal magnetic field receptors exist in many animals — from birds to foxes and possibly even people — but this is the first time someone has tried to explain the brain wiring that can actually use these receptors and provide a sense of direction. They did it by putting some pigeons in the dark and monitoring their brains.

Writing in Science, Le-Qing Wu and J. David Dickman at Baylor College of Medicine cite previous research identifying magnetic receptors in bird beaks, as well as in other areas in other vertebrates. They set out to find the neural network responsible for making sense of those signals.

Working with seven awake pigeons, the researchers used a Tesla coil to cancel out the effects of Earth’s magnetic field and induce an artificial one. They put the pigeons in a completely dark room to cancel out any light-polarization effects, which have also been suggested as a mechanism for animals’ magnetic navigation capabilities. They also stabilized the birds’ heads so they couldn’t rely on inner-ear cues to determine their directions.

Then Wu and Dickman turned up the magnetic field, adjusting its magnitude, elevation and other variables. They used a gene marker to identify when neurons were activated, focusing on neural areas that were already good candidates for this type of information processing. Ultimately, they pinpointed 53 neurons in the birds’ brain stems that had greatly enhanced activity. What’s more, those cells were most sensitive to the magnetic field ranges that correspond to Earth’s real ones — 20 micro-Tesla (μT) at the magnetic equator to more than 60 μT at the magnetic poles.

The poles shift over time, however, so the researchers note that these neurons must be somewhat adaptable, either through evolution or brain plasticity.

As for the origin of the signals? Wu and Dickman believe the magnetic information is transmitted to the neurons via the inner ear, although it’s also possible that beak and/or retinal receptors are involved.

“[The neurons] encode a geomagnetic vector that could be used by the neural population to computationally derive the bird’s position and directional heading,” they write. In other words: A neural global positioning system.

Exactly how these cells are used for orientation and navigation is still a mystery, however.

The research appears today at Science Express and will be published in the journal Science.