When the Fur Flies, He’s the Man to Call

Richard Stroud is the nation's chief medical examiner for wildlife, and he's getting a state-of-the-art lab. Poachers beware. 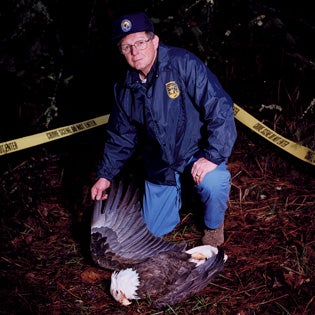 QUINCY OF THE BUSH:
Richard Stroud with a possible poisoning victim.

When it comes to fatal gunshot wounds, forensic pathologist Richard Stroud likes to examine things from the inside out. The bruising and tissue trauma, the size difference between entrance and exit wounds–everything becomes more obvious from the underside of the skin. Consequently, Stroud has developed a habit of skinning out the victims that pass across his autopsy table.

“Of course, I don’t have to worry about families wanting the body back for burial,” Stroud says.

On this day, the luckless fatality is a Mexican wolf that had been part of a reintroduction program in the Southwestern brushlands of Arizona and New Mexico. Unlike some of the bedraggled specimens Stroud has seen of late, this wolf appears to have been making a success of it, judging from the healthy feel of its coat and skin. Then it met up with someone unimpressed with the wolf’s protected status under the U.S. Endangered Species Act.

A preliminary examination of the wolf revealed what appeared to be a bullet entrance wound–no bigger than a baby’s pinky–on the animal’s rear-left flank and a ragged exit wound–around the size of a man’s thumb–behind the right shoulder. But a head-to-haunches X-ray failed to reveal the typical snowstorm of shiny flecks that result when a hunting bullet begins disintegrating on impact, leaving a mushroom of bullet fragments inside the animal’s body. With no bullet or bullet fragments to retrieve for a ballistics report, Stroud decides to assess internally, hoping for clues that might guide field investigators as to what kind of bullet and bullet casing to look for–and where–in the area where the carcass was found.

Stroud is on his way out of his office to begin the necropsy when he gets a call from the Fish & Wildlife special agent who FedExed the victim–neatly folded and frozen in a 4-foot-by-1-foot cooler–the previous Friday. “Don’t worry, I’m on my way to do your dog,” Stroud reassures, with the implied promise that he’ll have something useful to report in a few hours.

In essence, Stroud is the nation’s chief medical examiner for wildlife. His autopsy suite: a converted garage attached to the U.S. Fish & Wildlife Service’s forensic laboratory in Ashland, Oregon–the world’s only crime lab dedicated to animals. In addition to helping investigate the poaching of threatened and endangered wildlife, the lab has earned an international reputation for its ability to analyze and identify just about anything that could have come from or been made out of a wild animal.

In preparation for today’s wolf necropsy, Stroud pulls a blue lab coat over his usual plaid flannel shirt and Levis and yanks on a pair of surgical gloves. Stroud’s sunspotted hands, like his freckled face and thinning sand-and-salt hair, reflect a half century spent as much as possible outdoors. An avid hunter and fisherman since boyhood, Stroud says his years of field dressing deer and elk have proven highly useful throughout a career that began as a wildlife biologist studying the stomach contents of Arctic marine mammals in the late 1960s. Clearly, Stroud hails from the old school of wildlife management–one that views animals as natural resources to be managed rather than lovable friends needing protection for their own sake. “It’s no longer cool to collect data the way we used to,” says Stroud of the politically incorrect days when he was killing fur seals for science, right alongside hunters doing so for profit.

In the early 1970s, Stroud graduated from veterinary school with a specialty in pathology, and later adapted what he had learned working on pets and livestock to wildlife at the San Diego Zoo. Twenty-five years ago, he began working for U.S. Fish & Wildlife, with a primary focus on the diseases that afflict migrating waterfowl.

In 1989, Ken Goddard, the founding director of the wildlife agency’s newly opened $4.5 million forensic lab, proudly invited Stroud to tour his facilities. A former police-crime-lab director, Goddard had designed the lab to include the latest equipment and resources in all areas of criminalistics, from toxicology and DNA to ballistics and trace-fiber evidence.

Says Stroud of the visit, “I told him, ‘This is all very nice, but where do you examine the dead animals?'”

Fifteen years later, Goddard admits, “I hadn’t really thought of it.” Understandably so. Even the most sophisticated police crime laboratories leave autopsies to the nearest medical examiner. Unfortunately, at the time, there was no such thing as a forensic veterinary pathologist. “All I could do was tell the special agents to dig the bullets out of their victims as best they could and send them in to us for ballistic analysis,” says Goddard.

That all changed a few months later, when Stroud finagled a departmental transfer and career change that included medical examiner training at the U.S. Armed Forces Institute of Pathology, in Washington, D.C.

For the most part, the merger of crime lab and medical examiner’s office has proven amicable, says Goddard, aside from Stroud’s impatience with the perennial requests that he use more air freshener in the course of his work. “As a police investigator, I’ve worked my share of floaters,” says Goddard of his own tolerance for even the rankest of human corpses (floaters being the partially submerged corpses often found in an advanced state of decomposition). Apparently, wildlife carcasses can be far worse. “We’re convinced the man has no sense of smell,” Goddard says of Stroud’s indifference.

On the other hand, many of Stroud’s cases involve what he calls “dinner-quality meat,” owing to his practice of having field agents freeze their carcasses before shipping. Today, the wolf on Stroud’s table is just such a fresh-frozen kill, thawed over the weekend for a Monday autopsy. On the whole, it proves odorless until dissection of the stomach exposes pieces of animal even deader than it is. Stroud retrieves and tags several pieces of fur and bone for DNA analysis–to identify what may have been the victim’s last meal.

More pertinent to this investigation, Stroud reaches past the wolf’s internal organs to feel whether its spine has sustained damage. It has not, which suggests that the wolf would have continued to run for some distance after being shot. That’s bad news for the field investigator, who’ll find it harder to locate bullet casings and other evidence than if the wolf had dropped on impact.

But then Stroud makes a contrary finding. Using a long wooden dowel to probe the entrance wound, Stroud traces the bullet’s path through the belly and up through the chest. “It hit the postcava,” he says, referring to the large blood vessel that leads from liver to heart. Consequently, the wolf would not have gotten far before dying of massive blood loss. Stroud will tell the special agent to figure that the wolf was shot within a 100-yard radius of the spot where he found the carcass.

Stroud finishes skinning the wolf with a kitchen fillet knife, then lays
the intact pelt, fur side down, on a tarp spread across the concrete floor of the necropsy suite. He again threads the long wooden dowel through the entrance wound on the rear, left flank and pushes it across to the ragged exit wound behind the right shoulder.

Stroud’s assistant, Shelley O’Connell, steps up to take a photograph that Stroud says will help him show a jury that the wolf was clearly running away when shot. This may prove
crucial in refuting any claim that the
animal was shot in self-defense.

The size of the exit wound, in turn, speaks of someone firing the bullet from a high-powered weapon such as a rifle, but not using a typical hunting bullet, which would have left a larger, more ragged hole. Military ammo, Stroud speculates. But only a ballistics report on an actual bullet fragment or casing can confirm his suspicions.

For now, the dismembered wolf goes back in the deep freeze–folded, compressed, and bagged in bundles sealed with evidence tape and tagged to show chain of custody. Any criminal case will likely go nowhere unless some combination of luck and skill leads the field investigator to the crucial evidence.

Eventually, the wolf’s pelt may end up in a classroom or nature museum; its skull in a research collection, after being rendered down to clean bone by the colony of flesh-eating beetles that the lab’s forensic morphologist keeps in a large box.

Stroud averages 500 to 600 such necropsies a year. Last year alone, they included a record 24 wolves and around 150 eagles, as well as scores of other animals protected under the provisions of the U.S. Endangered Species Act or by other laws. Still other cases involve “illegal takes,” as when hunters use firearms during archery-hunting deer season (often faking a legal kill by sticking an arrow in the bullet hole), use nets to harvest fish in streams open only to hook-and-line sports fishing, or shoot animals from aircraft (a violation that Stroud has documented by the angle of gunshot wounds).

In each case Stroud must go beyond merely determining cause of death–the traditional role of the veterinary pathologist. “To your typical veterinarian, a gunshot wound is a gunshot wound. End of story,” he says. By contrast, a forensic autopsy is built around re-creating the death in a way that’s useful to a criminal investigation. In poisonings, for example, Stroud must not only retrieve tissue samples for toxicological analysis, but also determine whether the resulting wildlife deaths were deliberate.

In the recent mass poisoning of a bald eagle colony in Wisconsin, Stroud found that the birds had gorged on muskrats–and pellets of highly toxic pesticide carbofuran. Could the muskrats have eaten the pellets in some farmer’s field before their dying convulsions made them easy prey? A superficial necropsy would have suggested so. But Stroud noted a suspicious absence of fur in the eagles’ gullets, then went on to document knife marks on several undigested chunks of muskrat. His conclusion: The muskrats had been skinned.

This detail ultimately led investigators to a muskrat trapper who reported selling meat to the owner of the land where the dead eagles were found. Skinning would have involved gutting the muskrats, so any carbofuran pellets found with the meat had to have been added intentionally before it was set out for the eagles’ dining pleasure.

“Apparently the eagles’ roost tree was on property that the land owner wanted to develop,” says Stroud. “But under the Endangered Species Act,
the habitat of a threatened species is also protected.”

A somewhat similar case involved a Minnesota man suspected of a string of wolf poisonings in the mid-1990s. From the necropsy of the latest victim, Stroud sent samples of brain, liver and kidney for toxicological analysis, and chunks of deer meat from the wolf’s stomach for DNA analysis. The toxicology report confirmed Stroud’s suspicion that the wolf had died of massive cyanide poisoning (evident on necropsy by bright red tissues). DNA analysis matched the chunks of deer inside the wolf to venison found in the suspect’s freezer.

Both the above cases resulted in convictions, says Stroud, who has taken the witness stand around 25 times in the past 15 years, a modest number given the hundreds of necropsies he has performed. Nonetheless, the Fish & Wildlife Service is impressed enough to have pledged $12 million for a new forensic pathology suite at the Ashland facility, slated to be built within the next three years.

“It’ll look just like a state-of-the-art medical examiner’s office,” says Goddard. And that’s exactly what it will be.