In 2006, Darpa, the Department of Defense’s R&D arm, commissioned AeroVironment, a company specializing in remote aircraft, to create an... 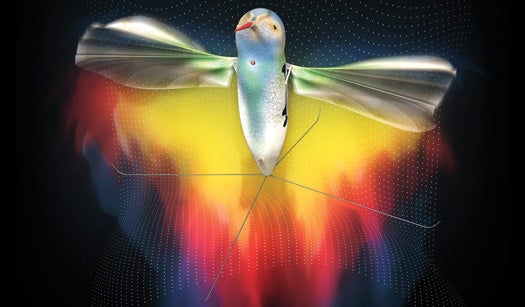 By beating its wings back and forth, the UAV creates lift by deflecting air downward, creating an area of high pressure directly below the wings and low pressure above. Bob Sauls
SHARE

In 2006, Darpa, the Department of Defense’s R&D arm, commissioned AeroVironment, a company specializing in remote aircraft, to create an unmanned aerial vehicle (UAV) small enough to fly through an open window. AeroVironment had already built the 4.5-foot-wingspan Raven, which first saw combat over Afghanistan in 2003, but making a UAV so much smaller took five years and 300 different wing designs.

_
Click here to discover how the hummingbird flies and rolls._

Finally, AeroVironment has a working prototype: the 6.5-inch-wingspan Nano Hummingbird. “It was never our intention to copy what nature has done; it’s just too daunting,” says Matt Keennon, the UAV’s head researcher. The camera-equipped bird beats its wings 20 times a second, whereas hummingbirds clock up to 80. Still, it can hover like the real thing, plus perform rolls and even backflips. Here’s how the bird flies.

A skeleton of hollow carbon-fiber rods is wrapped in fiber mesh and coated in a polyvinyl fluoride film.

The camera angle is defined by the pitch of the Nano’s body. Forward motion gives the operator a view of the ground, aiding navigation. Hovering is good for surveying rooms.

It weighs 18.7 grams (less than an AA battery). The craft is remote-controlled, but an onboard computer corrects speed and pitch. 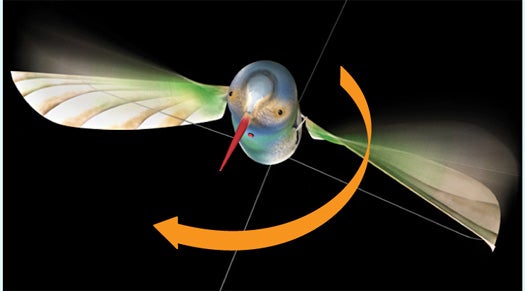 Increased angles mean more thrust. If the Nano Hummingbird sharpens the angle of its right wing on each forward stroke, and does the opposite on each backstroke, the craft rotates clockwise. 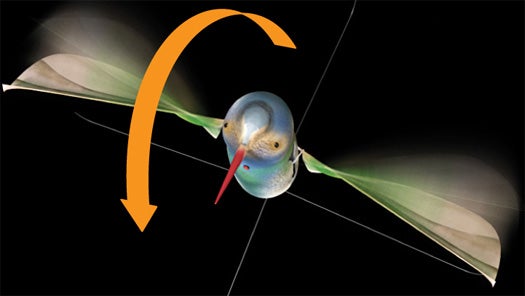 The wings beat symmetrically. If the angle at the end of the forestroke and beginning of the backstroke on both wings decreases, the nose dips downward and the craft moves forward. 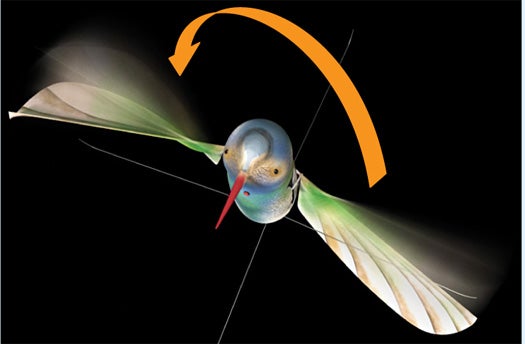 By increasing the angle of only its left wing, the Nano Hummingbird creates more upward thrust on its left side, which will cause the bird to roll to the right.
Animals
Birds
DARPA
Military
Robots
Wildlife
defense
fly
hummingbirds
june 2011
prototypes