Video: Seagull Robot Takes Off And Flies On Its Own, Just Like the Real Thing 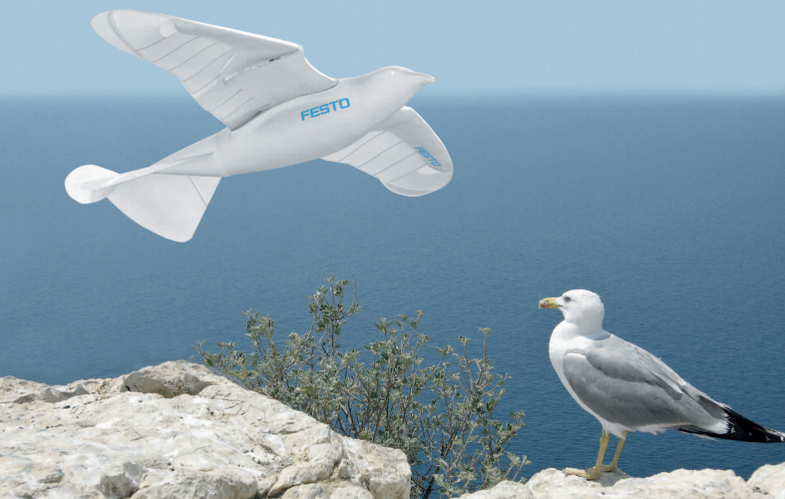 A new lifelike seagull ‘bot is one of the most realistic bio-inspired flight machines we’ve seen. SmartBird takes off, flies and lands on its own, flapping its wings and turning its head and tail to steer. It is modeled on the herring gull and its appearance and movements are uncannily similar to the real thing.

Designed by the German firm Festo, which also brought us the elephant-trunk-inspired robotic arm and the autonomous robotic jellyfish, SmartBird is Festo’s newest entry in its Bionic Learning Network program, which involves several universities in the U.S. and Europe and aims to use nature as a model for mechatronic systems.

The bird has a 6.5-foot wingspan, so it’s much larger than a real gull, but it looks pretty much like the real thing, as you can see in the video below.

SmartBird flies like a seagull thanks to an active torsion system combined with a complex control system. Its wings each consist of a two-part arm wing spar with an axle bearing on the torso. The wings and tail are the only mechanisms creating lift, and Festo engineers had to figure out bird flight in order to do it.

The company explains: “First, the wings beat up and down, whereby a lever mechanism causes the degree of deflection to increase from the torso to the wing tip. Second, the wing twists in such a way that its leading edge is directed upwards during the upward stroke, so that the wing adopts a positive angle of attack.”

The tail acts as an elevator and rudder, stabilizing the bird in straight-line flight and helping it change direction. Here’s how it works:

Perhaps not as unobtrusive as the teeny hummingbird spy drone, but impressive nonetheless.