Video: Creepy Madagascan Beasts Rub Their Back Hairs Together To Make Squeaks

Weird tenrecs caught on camera for the first time 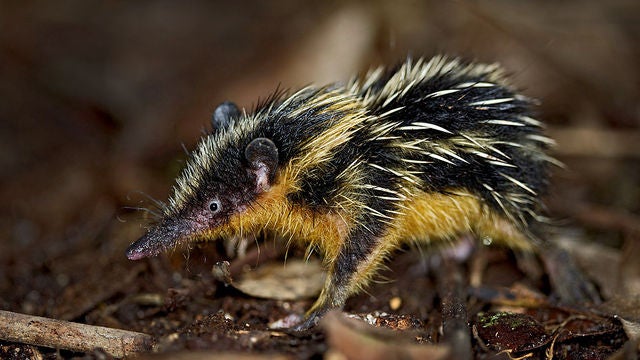 The only mammals in the world that chirp like crickets — by rubbing body parts together — are these strange shrew-like creatures called streaked tenrecs. A BBC film crew has captured their stridulations on camera for the first time.

The animals have special quills on their backs, which look like pale teeth and are noticeably different from the rest of its coarse fur and porcupine-like spines. When a young tenrec gets lost, as in the video below, its family members rub these quills together to produce high-pitched squeaks. The sound penetrates the rainforest undergrowth to help guide the tenrec back to its kin.

About 30 species of tenrecs are found throughout Madagascar, with a few living on the African mainland. The animals share a common ancestor with elephants, aardvarks and manatees. But the only one to communicate in this way is the lowland streaked tenrec, found only in Madagascar.

Their communications are mostly outside the range of human hearing, so filmmakers used bat detectors to ensure they could pick up the tenrecs’ ultrasonic calls. They found that the seemingly quiet creatures were actually quite chatty.

From lemurs to fossas, Madagascar is home to a vast array of weird animals — but this one takes the cake. Watch the stridulations in this video clip narrated by David Attenborough.