Birds May Use Quantum Mechanics To Migrate South

Scientists have long speculated that birds navigate the globe using magnetism; however, a new study suggests that quantum entanglement indeed... 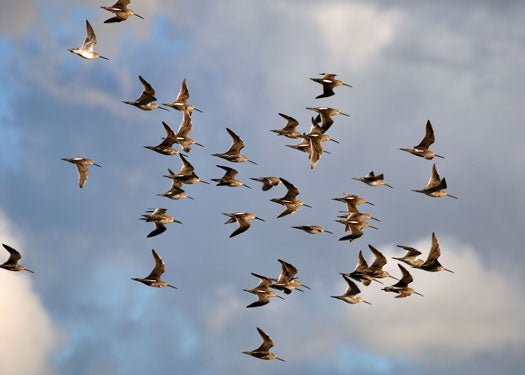 Scientists have long speculated that birds navigate the globe using magnetism; however, a new study suggests that quantum entanglement indeed enables birds to “see” the Earth’s magnetic field as if it were a pattern of colors.

Quantum entanglement describes a phenomenon that links a pair of electrons so that either one of them “knows” what the other is doing, regardless of their distance apart. According to a paper published in an upcoming issue of Physical Review Letters, physicists at the University of Innsbruck in Austria have designed experiments testing the theory that birds use a molecule called cryptochrome, located in their eyes, to sense magnetic fields.

Prior to this experiment, researchers at the University of California, Irvine, singled out cryptochrome as a candidate for the molecule that determines how birds sense magnetic fields, as it was known that cryptochrome electrons typically come in entangled pairs. Movement between the pairs occurs when magnetic fields cause the molecules’ electrons to wobble and when sunlight knocks one of the electrons aside. The theory posits that a chemical reaction in response to the wayward electron’s altered spin lets birds see magnetic fields in color.

Using the cryptochrome idea as the basis of their studies, physicist Hans Briegel and his colleagues tested how strongly entangled electrons respond to magnetic fields in comparison to how strongly disentangled electrons respond. Although initial tests indicated entanglement made no difference to cryptochrome itself, the team found that they could use the same calculations to test the effects of entanglement in real molecules. They surmise that the technique, which involves zapping the electron pairs with microwaves to test for entanglement, could be used to study the properties of entanglement in many different molecules. Discovering that sensitivity to magnetic fields varies by molecule could mean a breakthrough in understanding how quantum mechanics affects biology.

Briegel currently focuses on testing different molecules within the lab, Thorsten Ritz, a physicist whose work identified the cryptochrome molecule in the first place, is working on testing quantum entanglement on live birds.