Bat Conference, Day 1: Students Rush To Front Lines In Battle to Save Bats 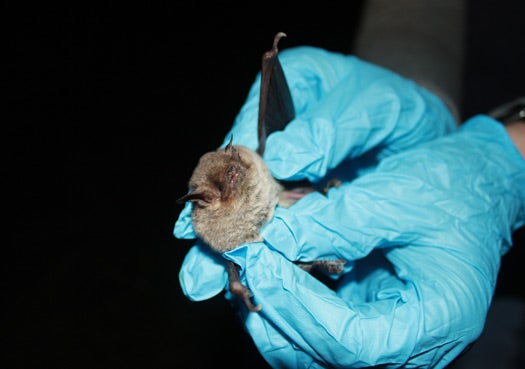 DENVER — What’s a crisis if not an opportunity? Scores of graduate students reporting new research at a bat conference this week shows the two are tightly bound.

Students are working on the front lines of one of conservation biology’s biggest challenges: The widespread death of bats from white-nose syndrome. The fast-moving fungus, which is expected to infiltrate much of the midwest and west this winter, is causing equally brisk priority shifts in academic institutions across the continent.

Students who were initially interested in topics like wind turbines and bat social behavior are shifting their focus to white-nose research. Even seemingly unrelated topics, like new methods for examining bat guano, is at least partly colored by white-nose and its impacts.

Money is one motivator, students and advisers say — private and public agencies are funneling hundreds of thousands of dollars into white-nose research, so biologists who don’t study it directly may have a harder time getting funding.

Alan Hicks, a retired wildlife biologist from New York, was the first field researcher to recognize white nose syndrome back in 2006. He’s been beating the drum ever since and practically begs graduate students to study the disease. He recently sent a former student, Kate Langwig, to work with another prominent bat researcher, Thomas Kunz of Boston University, with a promise: “I said, ‘I will haunt you to your dying days if you don’t try to solve this white-nose thing,'” he recalled.

But most young people don’t need the prodding — they say their love for bats and frustration about their plight are the biggest consideration. “I love bats — I don’t want to see them die,” said Sarah Brownlee, a master’s candidate at Bucknell University.

Brownlee’s interest in bats stemmed from undergraduate research on wind turbines, the other major bat killer. As an undergraduate at East Stroudsburg University in Pennsylvania, Brownlee knew she wanted to study mammals, but the first time she saw a bat, “I fell in love,” she said. She went to grad school at Bucknell University, where DeeAnn Reeder has a renowned bat research lab, because of Reeder’s work on WNS, she said.

Brownlee, 23, is interested in animal behavior and studies the differences between white-nose bats and unaffected bats. Last winter, she set up infrared cameras in an abandoned mine and in a hibernation chamber in her lab, and noticed the sick bats were arousing from hibernation every few days, as opposed to every 13 or 14 days like healthy ones. She believes the fungus causes an itchy irritation that wakes the bats up, and she wanted to see whether they spent more time grooming themselves. They did, and they also spent more time crawling around, stretching and yawning, she said. They moved so much that she had to keep rearranging her cameras to get the best angle (she could move them remotely, which doesn’t disturb the bats). This winter, she has more cameras installed in a mine known to be infected with white-nose.

After Brownlee graduates in May, she hopes to find a job as a field researcher or bat biologist working for the government or a non-profit group. She said sometimes she feels like her research is narrowly focused — “On the big scale of this planet, I’m studying bats; what is that about?” — but on the other hand, she’s glad to be working in a field with such major problems.

“It’s highly depressing — we know so little, and with all I do, there are more questions. But I like telling people what I’m doing and trying to make headway into what’s going on,” she said.

Kristin Jonasson, a graduate student at the University of Winnipeg, is studying the different hibernation behaviors of male and female bats, and notes that her findings may have implications for post-white-nose recovery of several species. Female bats have to conserve more fat over the winter so they’re plump enough to produce milk for their pups in the spring, and Jonasson said those fat reserves could also help them survive WNS. No one has ever studied the sex ratio of white-nose survivors, and Jonasson believes more data could help researchers understand population recovery.

Jonasson, 25, will defend her master’s thesis a month from now, and plans to pursue a PhD next. She is starting to look at possible schools and she knows white-nose research will be in demand; this fact is evident just from the content of this year’s bat conference. Nearly half of the 150-plus abstracts at the North American Society for Bat Research symposium mention white-nose in some way, about twice the amount as last year. Interest in bats, and the need for researchers, has grown as the disease has spread. This thrills older researchers like Hicks, who praised Brownlee’s and Jonasson’s work.

“These aren’t million-dollar projects; they are small problems, but every one answered this one tiny piece,” he said. “It’s important research, and nobody else is doing it.”

Two years ago, when Jonasson started graduate work, white-nose was still a brand-new problem that had yet to reach the western United States or Canada. But she knew population studies and baseline data would be important when the fungus eventually reaches her region, and she tailored her research to fit those needs.

“When there’s a massive decline like white-nose, maybe you shouldn’t do exactly what you love — there are more things that need research,” she said. “I still love this, but it’s an area that needs help.”