New book ‘Nextinction’ is both trippy and poignant 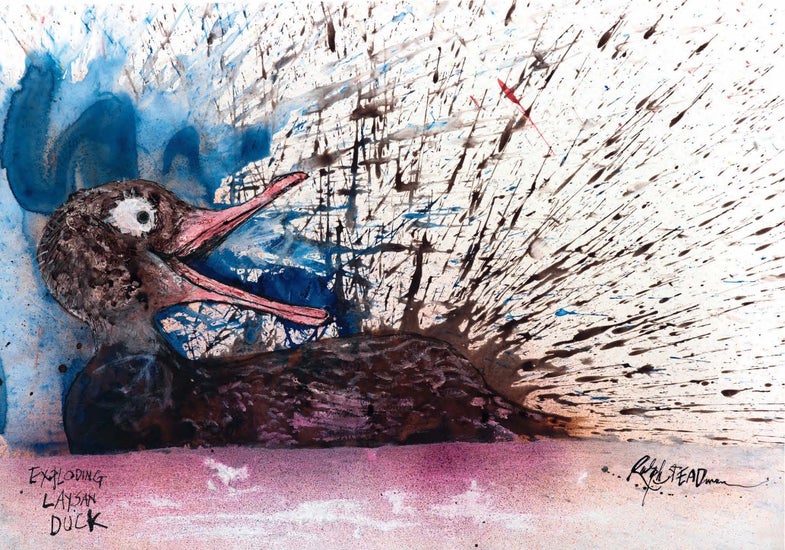 The Laysan Duck was once widespread across the Hawaiian Islands but became isolated on Laysan Island. Thanks to the removal of introduced rabbits on Laysan during the 1980s, the duck's population has begun to thrive. Despite a botulism outbreak and a tsunami, the bird fights back and the numbers are now estimated at somewhere between 500 and 680 mature individuals. Ralph Steadman and Ceri Levy
SHARE

In a new book out September 15, illustrator Ralph Steadman and filmmaker Ceri Levy team up again to put birds on display. As a follow-up to Extinct Boids, the new book Nextinction focuses on the birds that are still around, but barely—specifically the species on the IUCN Red List.

Steadman draws these birds (or “boids”) in his distinct style (you’ve likely seen his collaborations with gonzo journalist Hunter S. Thompson), making up a few new species along the way. The book also includes descriptions of the birds and a couple snippets of Steadman and Levy’s correspondence while producing the book. We’ve excerpted a sample of the book above. 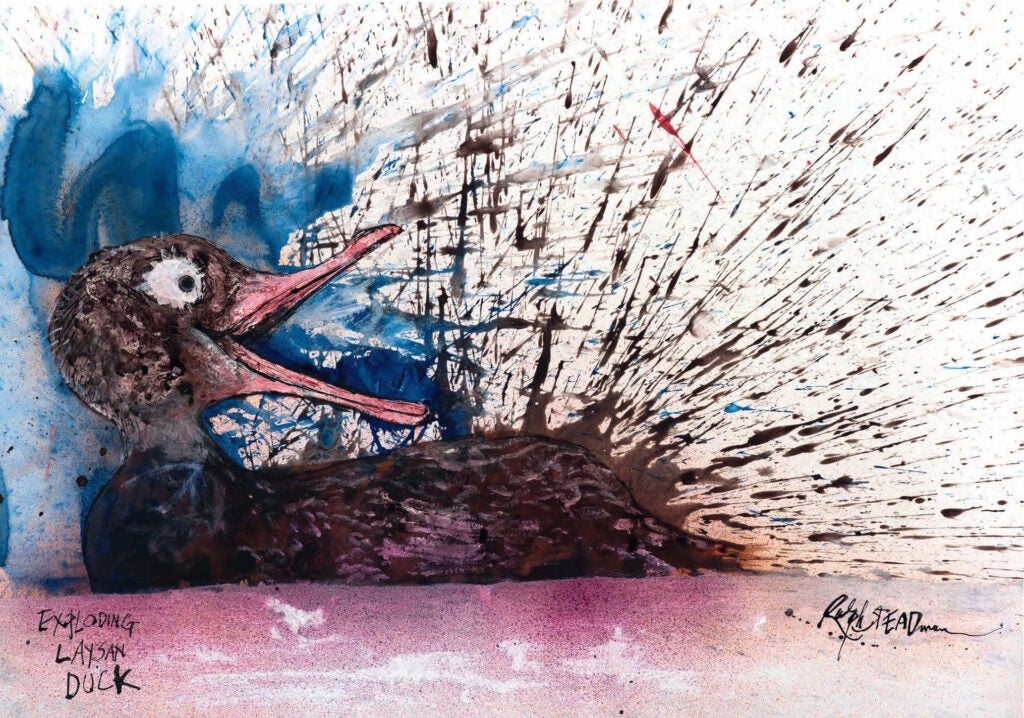 The Laysan Duck was once widespread across the Hawaiian Islands but became isolated on Laysan Island. Thanks to the removal of introduced rabbits on Laysan during the 1980s, the duck’s population has begun to thrive. Despite a botulism outbreak and a tsunami, the bird fights back and the numbers are now estimated at somewhere between 500 and 680 mature individuals. 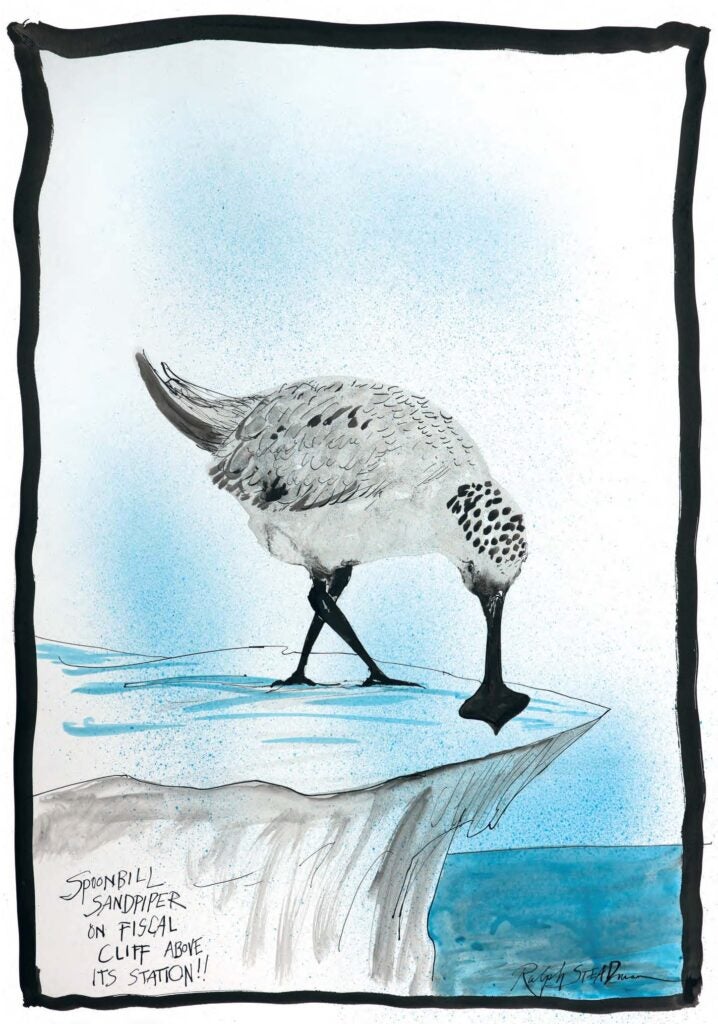 This weird-looking fella, a tad larger than a sparrow, encounters many of the reasons why so many birds have become extinct from this world: predation by dogs and foxes and skuas, which take eggs and chicks, as well as human disturbance, inclement weather and habitat destruction and alteration, particularly the industrialization along the bird’s migratory flyway and the development of its tidal wetland feeding areas. 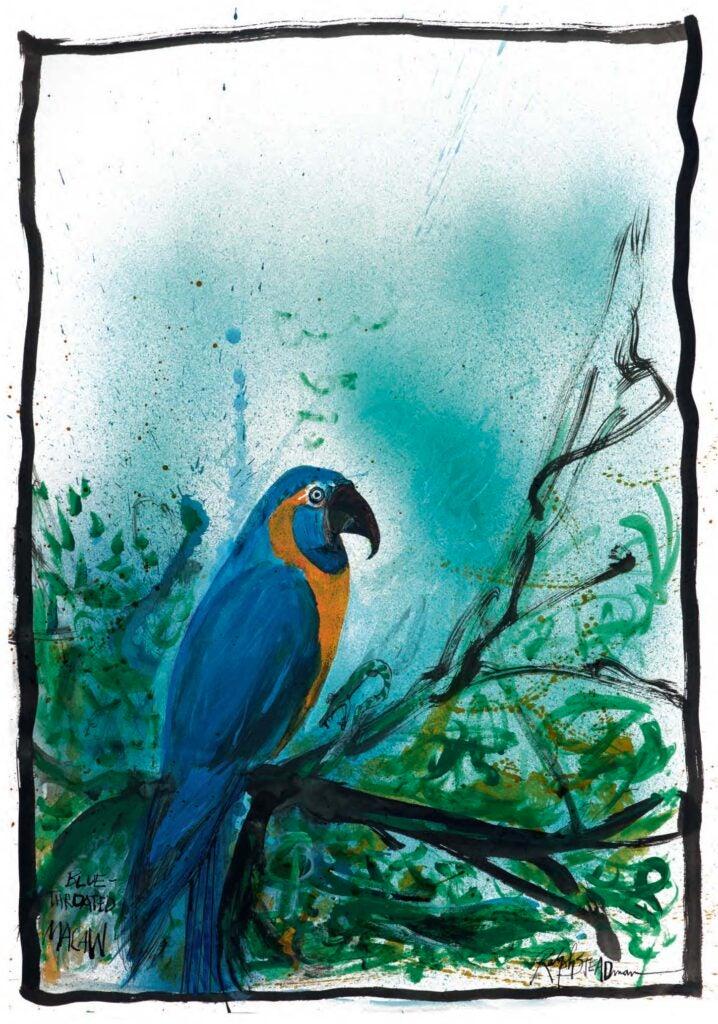 Today the Blue-throated Macaw is endemic to only two locations in Bolivia, and unfortunately the history of always being a popular macaw for the caged-bird trade has left its grubby mark upon its numbers. And if that wasn’t enough, loss of habitat has played its part for those birds that have avoided being caught. Much work has been done to halt the caged-bird trade with a fair amount of success, but it is still going on. The worrying trend is that for many of the traded birds their numbers are higher in captive populations than they are in the wild and this needs redressing. 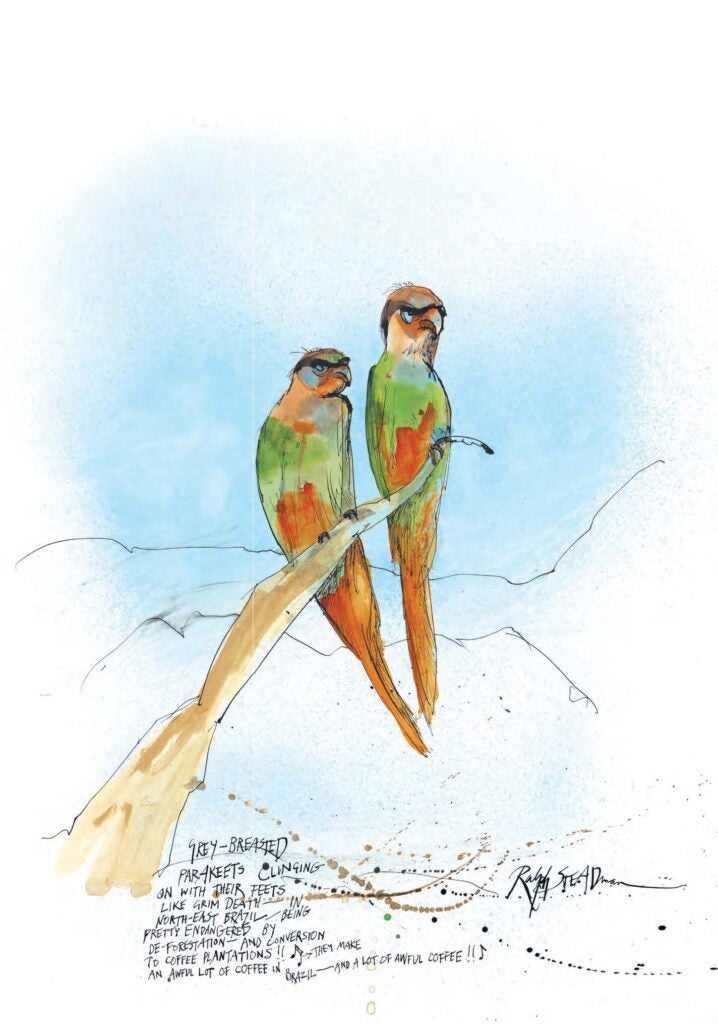 The Grey-breasted Parakeet hails from northeast Brazil and, as its small population is on the decline, it is classified as Critically Endangered. Although it was once known in four locations, this has now been cut down to two and its numbers continually dwindle. Habitat loss is one reason for its disappearance, but the main concern is trapping for the caged-bird trade. Searches are underway to find lost groups of the parakeet and a previously unknown colony of five individuals was discovered nesting on top of a mountain ridge in August 2014. 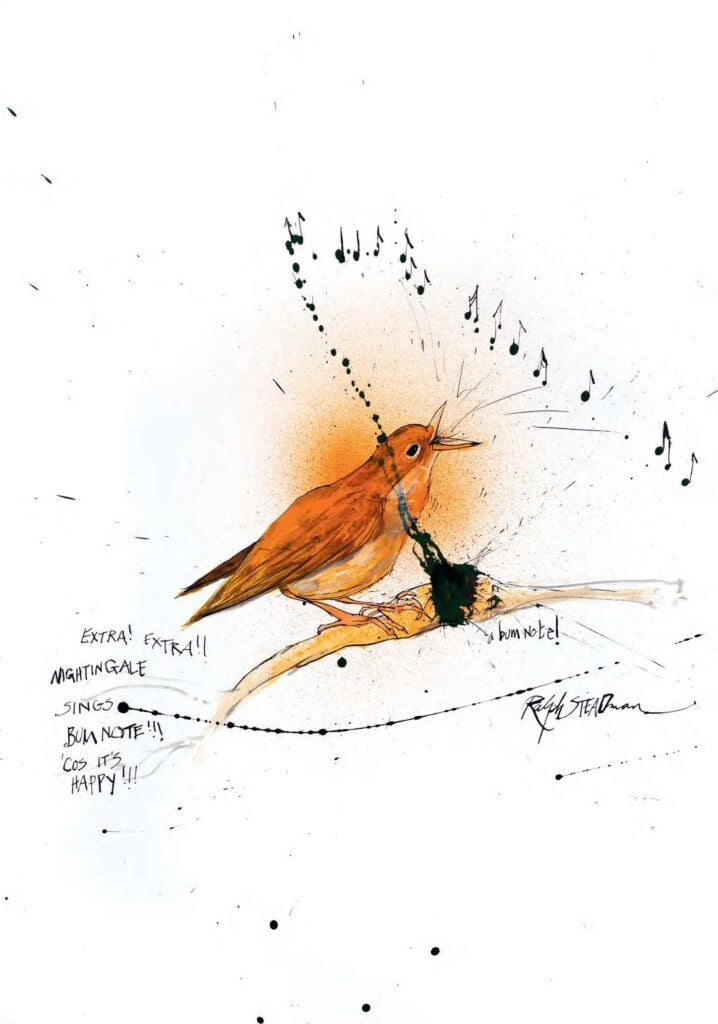 Nondescript, but boy when it opens its beak those notes float out in a beautiful liquid aural delight. The Nightingale is now in a somewhat perilous state—its numbers have declined by 53 percent between 1995 and 2008. The reality is that we need to find a way to maintain the right kind of habitat for this bird. This is crucial for its continued survival. 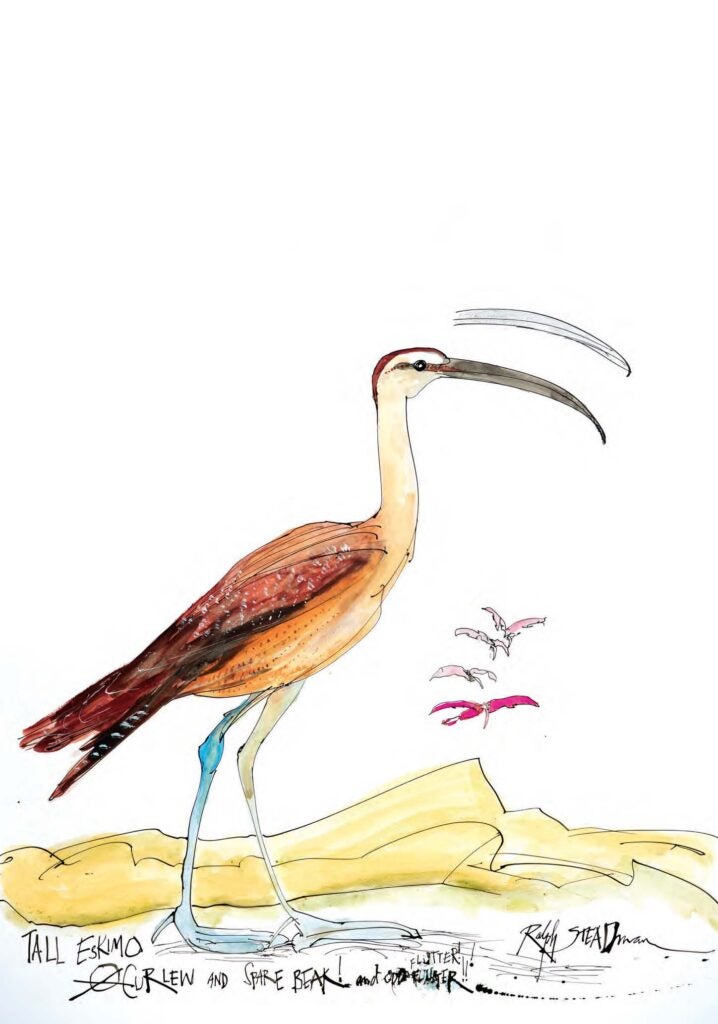 The Eskimo Curlew is yet another once-abundant species that has been lost, this time since 1963. If any curlews remain, their numbers are tiny, probably fewer than 50 in total. Up until the 1870s, extraordinary-sized flocks of Eskimo Curlews would migrate from the Northwest Territories in Canada, fly across North American and down to the southern parts of South America. 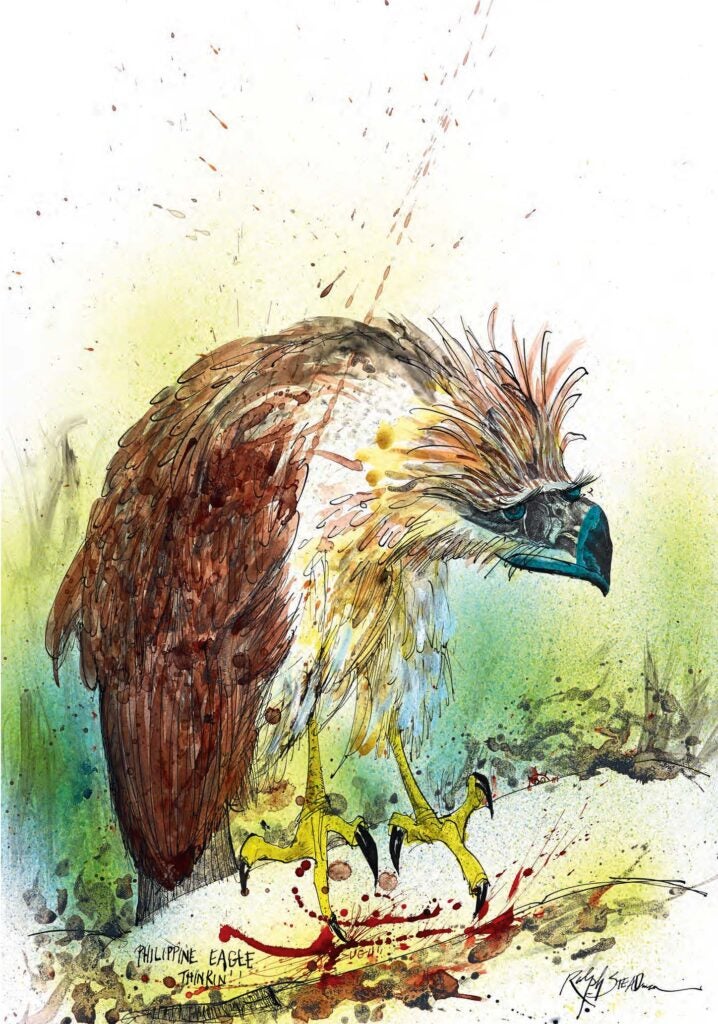 These magnificent regal raptors are Critically Endangered due to loss of their forest habitat. A slow reproduction process also doesn’t help, with a single chick being born every two years from one pair of birds that mate for life. Public-awareness campaigns, captive-breeding programs, and habitat protection are all aiming to make a difference to this eagle, and its fortunes may soar once again. 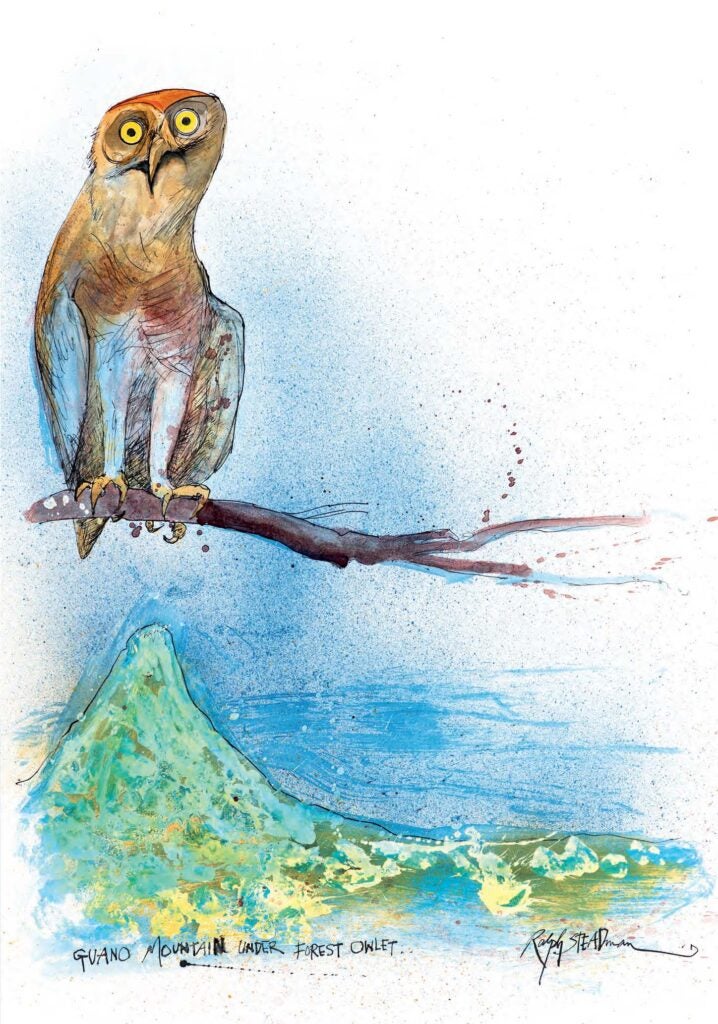 This owlet has a small population, which is probably under threat from removal of its forest habitat. Predation from raptors, a lack of suitable tree-cavity housing and the use of body prats and eggs in local customs also affect the bird’s existence.
Animals
Birds
Wildlife
books
Extinction
illustrations