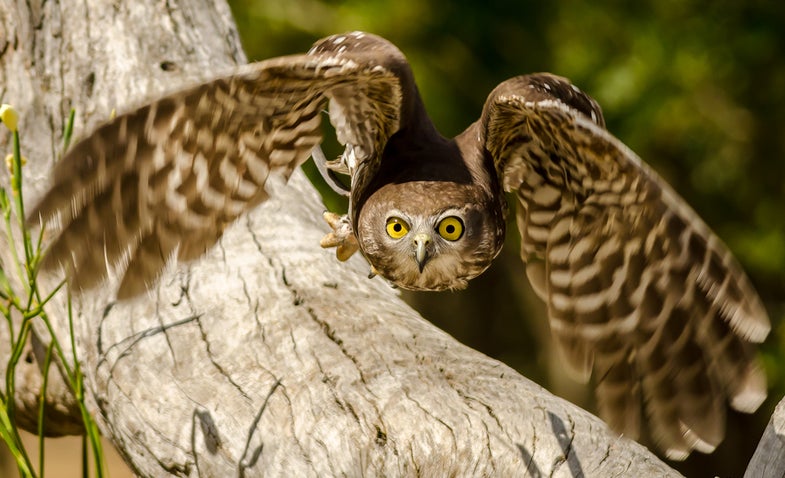 Owls are some of the most gifted and silent hunters on the planet, able to swoop down on prey without a sound. Their stealth is all in the wings, which are specially structured to reduce noise. Now, scientists have figured out a way to take that unique quality and create materials that can make giant machines like wind turbines run quietly.

“No other bird has this sort of intricate wing structure,” physicist Nigel Peake, who led the research, said in a press release. “Much of the noise caused by a wing–whether it’s attached to a bird, a plane or a fan–originates at the trailing edge where the air passing over the wing surface is turbulent. The structure of an owl’s wing serves to reduce noise by smoothing the passage of air as it passes over the wing, scattering the sound so their prey can’t hear them coming.”

Feathers on an owl’s wing

The researchers have been looking at owl wings as an inspiration for creating quieter technologies for a while, but now they’ve finally managed to bring their vision to life. In a presentation at the American Institute of Aeronautics and Astronautics (AIAA) Aeroacoustics Conference, Peake and his colleagues announced that they’d figured out a way to reduce the noise of wind turbine blades cutting through the air.

Initially the researchers managed to quiet wind turbines by attaching a thin, fine fabric, like the kind used in wedding veils, to the edges of wind turbines. The fabric acted like soft feathers on an owl’s wing, scattering the noise made by the turbine. But wedding veils are far from practical for use in industrial applications. So the researchers managed to create a 3D printed plastic coating that mimicked the veil-like structure, and found that it reduced the noise of a segment of a wind turbine blade by 10 decibels in laboratory tests.

Ten decibels is just about as loud as the sound of breathing, but added up, it could help make wind turbine farms less annoying to their neighbors. The researchers hope to continue to make their initial invention more efficient, eventually making both wind turbines and airplanes quieter.