Alligator On Helium Reveals The Secret Meaning Of Alligator Bellows

They bellow to communicate their body size to other gators 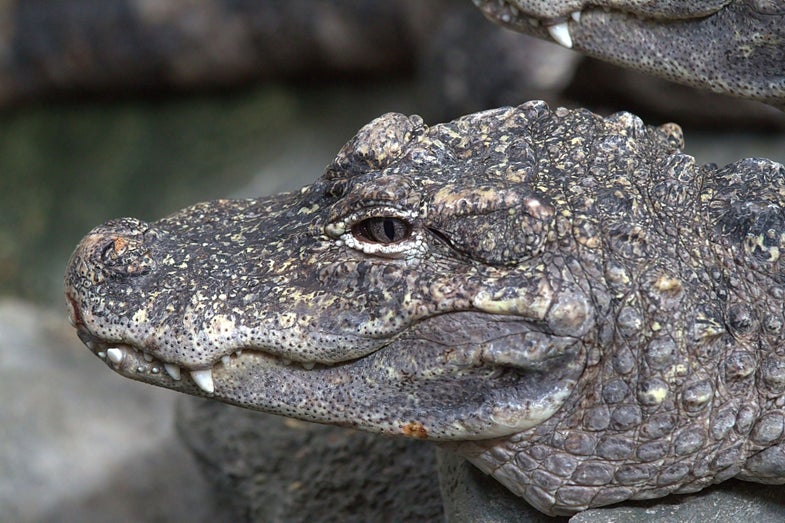 Alligators are extremely vocal animals, making loud grunts called bellows year-round, but especially around their mating season. Researchers have long known that alligators make these sounds by exhaling either above or below the water depending on the species, but they were never sure why they did so. After making alligators inhale helium, researchers discovered the reason: alligators bellow to communicate their body size, according to a study published this month in the Journal of Experimental Biology.

Researchers knew other animals used a similar sound-to-size code. The frequency of birds’ tweets and chirps depend on their size—the larger the bird, the deeper the sound. That’s useful for finding a mate (a female may look for a male with a lower-pitched mating call, for example), and for resolving territorial disputes. But they didn’t know if sound frequency correlated with body size for reptiles as well.

So they decided to test the model on alligators because they are very vocal reptiles. First, they put a female Chinese alligator in an airtight chamber and recorded its bellows as it would sound in the wild. Then, they filled the chamber with heliox, a combination of helium and oxygen, and recorded the sounds that the alligator made. Like when a human inhales it, helium makes the sound waves move faster, so the alligator’s bellows sounded higher-pitched. The researchers then put both recordings into an acoustic modeling system that would estimate the size of the alligator’s head that would have made the sounds. The model predicted that a smaller alligator made the higher-pitched sounds, indicating to the researchers that alligators use their bellows to communicate their body size to one another.

Alligators, their crocodile relatives, and birds are all direct descendants of dinosaurs, and the researchers suggest that dinosaurs may have made similar sounds to show their size, too. All of which is to say, in the animal kingdom, sounds and size often go hand-in-hand (or claw-in-claw/flipper-in-flipper).