Just One Penguin Could Break Up A Huddle 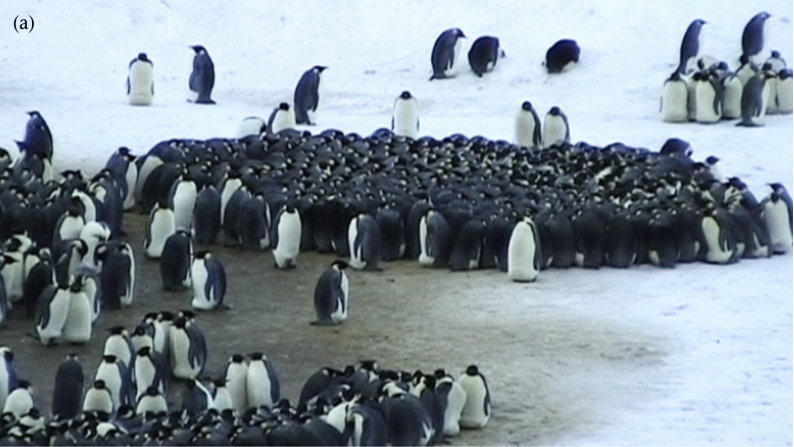 It’s a known (and adorable) fact that penguins huddle together when temperatures plummet. It seems simple: they stick together to keep warm. But after monitoring Antarctica’s Pointe Géologie Archipelago colony of more than 3,000 emperor penguins for three breeding seasons (in 2005, 2006, and 2008), researchers have determined that the simple huddle is much more complex that we realized. The research was published in December’s Animal Behaviour.

The huddling is known as social thermoregulation, and penguins do it more often when temperatures plummet and winds get stronger. The most extreme examples of social thermoregulation, as the paper notes, are done by emperor penguins. They are the only animals that breed during the frigid Antarctic winter, and thus need to keep warm. The researchers found that emperor penguin huddles lasted from about 12 minutes to several hours, and individual emperor penguins spent an average of 50 minutes in a huddle. One theory as to why the penguins don’t stay together longer because the huddles get too warm for them. In some cases, temperatures in the huddle reached as high as 99.5 degrees F (37.5 C), well above the 68 degrees F (20 C) the penguins can handle. And so huddles might break up to regulate this heat. In fact, once they had left a particularly hot huddle, some penguins were observed eating snow, possibly to lower their body temperature.

But how do these huddles end? One would think it’s caused by a penguin towards the center of the mass, where temperatures are highest. However, the researchers found that the breakups tended to start with penguins at the edge of the group, and took only two minutes to spread through the huddle. This could be because the warmth doesn’t increase linearly the further into the huddle you get. Or, possibly because the penguins in the middle of the group are trapped and basically immobile.

The researchers acknowledge that these results are specific to one colony of penguins. I would humbly volunteer to monitor another colony to see if the hypotheses hold true.