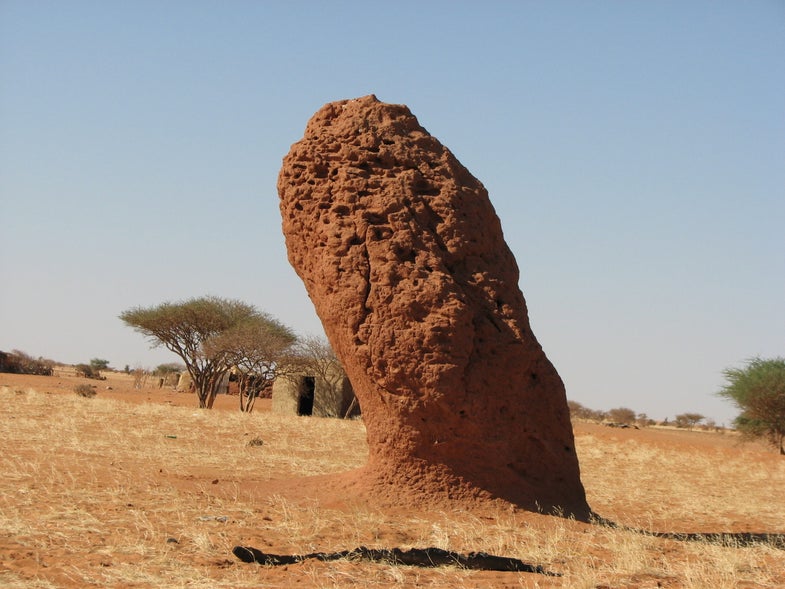 Termites get a bad reputation in the housing business. They are often looked at as signs of the domestic apocalypse, causing billions of dollars in damage to houses every year. But when it comes to building their own homes, termites are master engineers. Such is their architectural prowess as some of their mounds even have solar-powered ventilation systems.

Don’t worry, termites aren’t beating us when it comes to solar panel production. But they are using the power of the sun as a sort of makeshift ventilation system. A recent study published in PNAS found that some termites build mounds that circulate air by harnessing the warming power of the sun.

Termites are incredibly small, usually just a few millimeters long, but they can build homes, called mounds, that are three to six feet tall (and in some cases, are even taller.) It takes a huge number of termites to build and maintain a mound, and all those bodies in a small space–along with the fungus gardens that some termite colonies tend–can lead to stale air really fast. Scientists knew that there had to be a ventilation system that exchanges air between the interior and exterior of the mound, but the mechanism behind that air exchange had remained elusive.

Previously, researchers thought that the termites built the mound, complete with it’s tunnels and chambers in such a way that the heat from all the living termites would push air from inside the mound out into the atmosphere, and allow cooler air in. Then researchers discovered that the termite ventilation system worked more like lungs, intaking and expelling air throughout the day. Researchers thought this could be driven by changes in air pressure and wind from outside the mound.

This new paper proposes that instead of wind, the system is driven by the temperature changes that fluctuate between day and night. Inside the mounds of many species of termites, including Odontotermes obesus, the species involved in this study, there is a hole in the center that works like an atrium or chimney. Connected to this central ‘chimney’ are several smaller tubes. During the day when the sun is beating down, air warms and rises in the smaller tubes and cools and sinks in the larger tube. At night, the process reverses as air in the smaller spaces cools faster than air in the middle. This airflow ventilates the mound efficiently–no air conditioning needed.

These termite mounds, complete with ventilation systems, can last for ages. One mound, recently found in Africa is over 2,000 years old.

Ponder that for a minute, but then call an exterminator. Even if termites can build amazing homes, you don’t want them to destroy your own.