Robot Pets Have a Leg Up on Fido

They're cleaner, quieter, and actually quite lovable 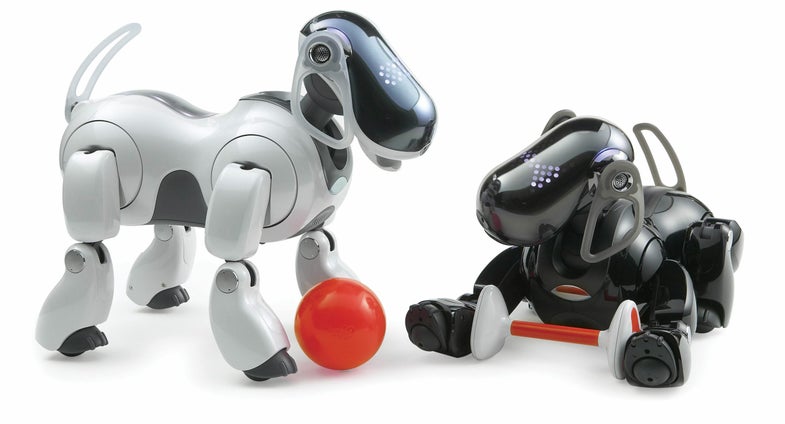 Humans have been bonding with domestic animals for tens of thousands of years, but Jean-Loup Rault, an animal scientist at the University of Melbourne, thinks new companions are coming: robot pets. Just as digital technologies have altered how we interact with each other, they could soon do the same for us and animals.

This may not sit well with pet-lovers. A plastic dog is hardly as cuddly as a Pomeranian. But Rault argues the robot variety has a lot going for it: “You don’t have to feed it; you don’t have to walk it; it won’t make a mess in your house; and you can go on holidays without feeling guilty.” Plus mechanical animals could open up pet ownership to people with allergies, mobility issues, or tiny apartments.

The biggest selling point might be that robot pets combine the utility of a machine with the companionship of an animal. Dan Goldman, who works with biomechanical robots at the Georgia Institute of Technology, spitballs what one might look like: “It’ll be a dog that can read your emotions and respond. It’ll be a snake that can slither under your bed to find toys.” One day we might even be able to transfer a robot pet’s memory to an upgraded model to make it a lifelong companion.

That’s convincing on a practical level, but it doesn’t address whether humans can actually bond with machines. Studies suggest we can: When companion robots like Paro, the sensor-studded interactive seal, have been given to nursing-home residents, they can improve moods, combat loneliness, and increase social engagement. “As humans, we’re eager to bond with things,” says Bill Smart, who studies human-robot interactions at Oregon State University. “People give their cars names. Kids give their stuffed animals back-stories.” So too with robots. When Sony shut down the last tech clinic for its discontinued dog Aibo in March 2014, owners in Japan held funerals.

In the end, what might hold people back from adopting robot pets could be as simple as their frame of reference. For those who grew up with living, breathing, slobbering pets, the mechanical kind might not do. Neither Rault nor Smart wants one. But for kids who constantly engage with smart technology, extending that connection to a robot dog or dino just might be the next logical step.

For more on robo-pets, check out our podcast.