Here’s How A Mother Panda Cares For Her Newborn Cubs

With a little help from her (zookeeper) friends 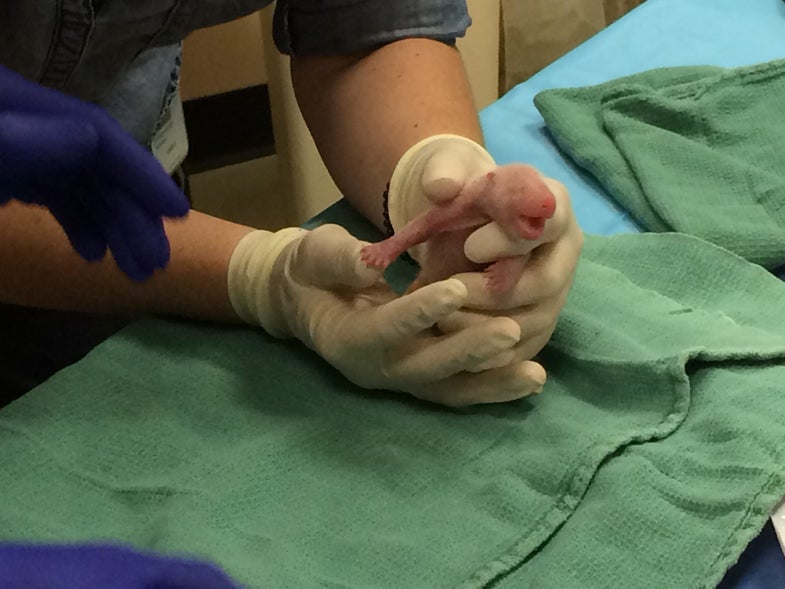 It may take a village to raise a child, but it takes a team of expert zookeepers and a patient panda to raise two giant panda cubs.

Twin pandas were born to panda Mei Xiang on Saturday, August 22 at the Smithsonian’s National Zoo and Conservation Biology Institute in Washington, DC. And keeping the tiny babies healthy has proved a task for a whole team of zookeepers.

Mei Xiang can only care for one cub at a time, so zookeepers are playing a bizarre twin swap worthy of The Parent Trap. Every few hours, the zookeepers replace one cub with the other, giving the tiny pandas a chance to bond with their mother. The other cub is placed in an incubator, where it is kept safe and warm, and fed on a special formula. The zookeepers are trying to give each cub equal time with its mother, but that can be difficult. In an update today the zoo said that they had a “challenging night” when Mei Xiang refused to put down the cub in her care. The swap had to wait until morning.

The twin cubs are incredibly tiny compared to Mei Xiang, who weighs around 233 pounds. They’re so small that on August 19, three days before giving birth, one fetus barely showed up on an ultrasound. When they were born the cubs weighed just 138 grams and 86.3 grams, respectively. For comparison, 100 grams is roughly equivalent to half a baked potato. Why the small size? One theory is that the short gestation is because there is so little nutritional value in bamboo, the main food source for giant pandas.

“It is easier for the animal to convert bamboo into milk than to convert bamboo into animal tissue,” panda expert Dajun Wang told the Huffington Post in 2013, when Mei Xiang’s last cub, Bao Bao was born. Wang added that the small size of the baby does require excess attention from the parent, unlike other animals who are born larger.”A tiny baby needs more care from its mother, for nursing, keeping warm and to avoid predators. I believe it is kind of balance.”

The gender of the two panda cubs is still to be determined, as is their paternity. Mei Xiang was inseminated with sperm from two pandas, and due to a biological quirk, her cubs could have different fathers. The pandas will not be named until they are 100 days old in accordance with Chinese tradition. The giant pandas at the National Zoo are leased from China.

If you just can’t get enough pandas, check out the zoo’s live webcam.