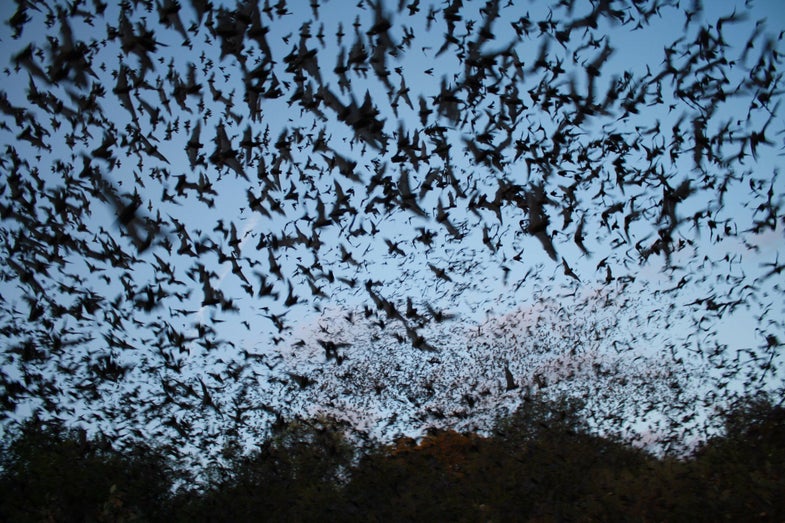 Last week, a swarm of 150 bats was released near a cave complex in Hannibal, Missouri. Each of the furry fliers was a medical marvel–they were survivors of the devastating fungal infection known as White-Nose Syndrome, which has killed millions of bats since it emerged 10 years ago.

But the fungus, named Psuedogymnoascus destructans (Pd for short) appears to be vulnerable to a very common bacteria, Rhodococcus rhodochrous found in soils. In a bacteria versus fungus showdown, the bacteria wins by releasing volatile organic compounds, creating an environment that prevents the fungus from growing.

Scientists working at Georgia State University identified the potentially healing properties of the bacteria back in 2012, while looking at bananas.

“Originally, we were investigating the bacteria for various industrial activities,” lead researcher Cornelison told Mother Nature Network. “In some of those earliest experiments, in addition to delaying the ripening of bananas, we noticed the bananas also had a lower fungal burden. I was just learning about white-nose syndrome at the time. But I thought that if this bacterium could prevent mold from growing on a banana, perhaps it could prevent mold from growing on a bat.”

Pd is so destructive to bat communities because it attacks when the bats are hibernating. The fungus grows over the nose and mouth and through the body, an invasion that wakes the bat up. Once roused, the bat uses up a lot of the fat and energy that it stored up over the warmer months, causing it to die of some horrendous combination of starvation, dehydration and exhaustion before it can replenish itself in the spring. Because most bats reproduce slowly, it is hard for bat communities to rebuild after being infected.

The researchers collected infected bats from hibernacula (places where animals like bats hibernate) in Missouri and Kentucky. The sick bats were sedated and placed in coolers that also contained the bacteria. The bacteria produced compounds that stymied the growth of the fungus, and all recovered, to varying degrees. The healthiest 150 were released in Missouri last week. Work will continue to see how these bats fare in the wild, and whether the method can be expanded to additional caves in the future.

Other research groups around the country are also working on solutions that range from using a kind of bat probiotic to boost bats’ immune responses, adapting AIDS treatments to combat the effects of the fungus, and even engineering solutions that allow researchers to keep track of the fungus’ spread.