Fungus is no fun for snakes 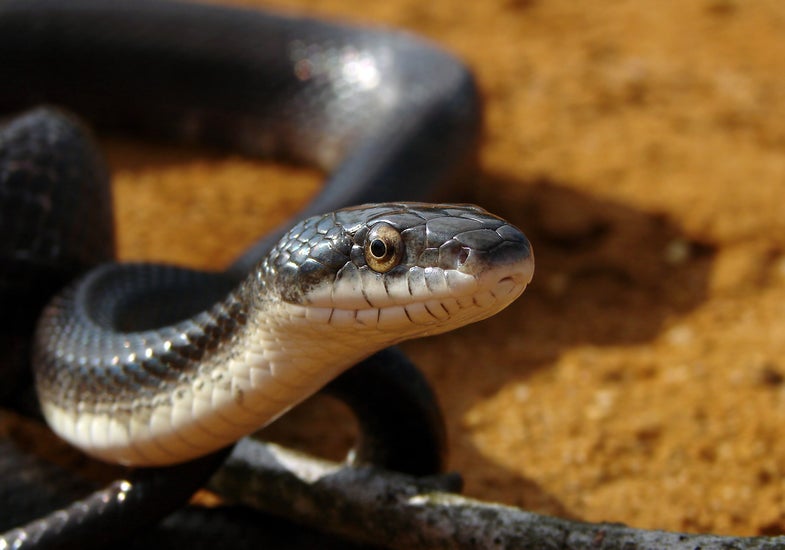 Snakes slither, rattle and constrict their way across movie screens and nightmares. But these reptiles play a vital role in ecosystems around the world, keeping down pest populations. Unfortunately, here in the United States, some snakes are starting to get sick.

In a paper published today in the journal mBio, researchers with the United States Geological Survey announced that they’ve discovered the culprit responsible for causing a deadly skin infection in snakes, a fungus called Ophidiomyces ophiodiicola.

“There is a fear that Ophidiomyces could drive at least some populations of snakes to extinction,” study author Jeffrey Lorch said in a statement.

The fungus is responsible for a disease called snake fungal disease, or SFD. Snakes with SFD develop lesions on their skin, which makes them shed more frequently than a healthy snake. An infected snake can get eye infections, a swollen head, and is more likely to display unsafe behaviors such as staying too long in the open, where it is more likely to run into trouble from other predators.

Since scientists first saw this disease in 2006, seven species of snake have been identified with the disease, with reports coming in from nine states in the Eastern United States, from Florida to Wisconsin. Previously, researchers knew that Ophidiomyces was always present in infected snakes, but other fungi were usually present as well, so they weren’t able to definitively point to Ophidiomyces as the culprit. Just like a doctor has to diagnose a disease before starting treatment, without an accurate identification, biologists couldn’t develop countermeasures to keep SFD from spreading.

By isolating the Ophidiomyces fungus from an infected snake and introducing it to healthy snakes in a lab, the researchers were able to show that Ophidiomyces is, in fact, responsible for SFD. Researchers hope that by identifying the fungal culprit they can plan a regimen that might keep wild snake populations healthy long into the future.

SFD isn’t the only fungal disease affecting wildlife. White Nose Syndrome kills millions of bats each year, and a chytrid fungus plagues amphibians. Researchers are still working on treatments for the diseases.