And other spooky adventures in plant genetics, just in time for Halloween. 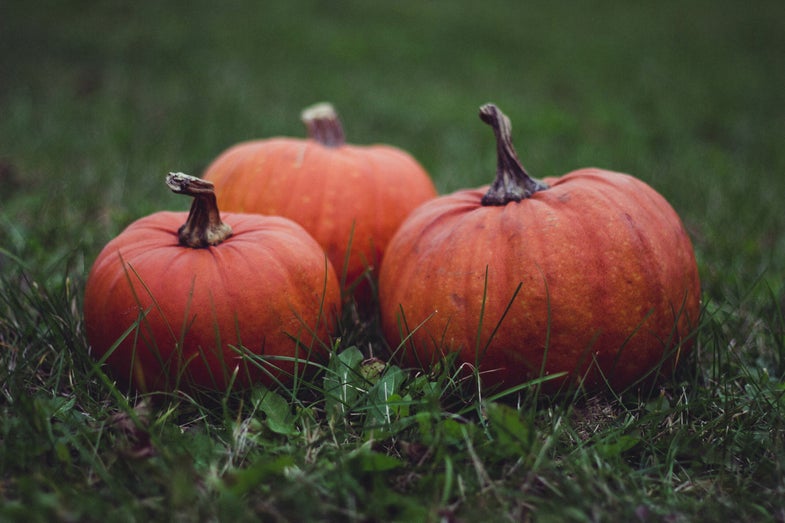 Pumpkins are, arguably, the least spooky part of Halloween. They are also the least contentious (see: candy corn), the most orange, and—scientifically speaking—the coolest.

Humans tend to think of themselves as the genetically superior species, but plants have us beat when it comes to genomic promiscuity. And it turns out that the modern pumpkin evolved from a mash-up between two different species which created its mutant ancestor. This monster pumpkin had double the normal number of chromosomes and eventually became what we all like to put in our muffins during the fall. Frankenstein would be proud. Geneticists figured this out by sequencing the modern pumpkins genome and comparing it to other squashes in its family. They published their autumnal findings last month in the journal, Molecular Plant.

Plants are genetically promiscuous, and we should be thankful for that

Human fetuses are pretty delicate. One sperm meets one egg, and each developmental step follows from there. If there aren’t the right number of chromosomes, the whole process falls apart and the embryo dies. Plants are far less picky. They can mash their genes together in a multitude of combinations—including by almost literally combining two entire genomes into one cell—and still create a healthy living cell. Having multiple full genetic sets is called polyploidy, and it’s incredibly common amongst plants. In fact, around two thirds of all species have it. An even higher proportion of food crops that we eat are polyploid, probably because we unintentionally selected for it.

Strawberries are an excellent example. A normal strawberry has two copies of each chromosome the same way humans do. That’s called being diploid. During reproduction, the two copies are supposed to split so that each sex cell (e.g. sperm and egg, for humans) has just one copy. That way when two cells come together, the resulting embryo has two chromosomal copies. But it turns out you can force strawberries to have asymmetric cell division such that it forms sex cells with two full copies. When a pair of those sex cells combine, the daughter berry has four versions of each chromosome. This makes the strawberry bigger.

Over time, we’ve developed strawberries with more and more chromosomes, gradually increasing the size of the fruit to the monstrosity it is today. Consumers love it, so farmers keep growing them this way. Plenty of other fruit follows this principle, too—more chromosomes, more flesh. But in the wild, this isn’t always an advantage. It does offer genetic flexibility, but sometimes these multi-genome crops are no longer fertile, especially if they have an odd number of chromosomes that can’t split evenly into sex cells. So natural varieties with infertility would quickly die out. Farmers are able to get around this by cloning the plants instead.

Farmers also use plants’ genetic flexibility to mash up different varieties to produce useful hybrids. Wheat, for example, has three separate pairs of chromosomes because three types were crossed to create a plant with more optimal properties for growing and harvesting.

Back to this ancestral pumpkin: What’s up with that?

Anywhere from three to 20 million years ago, two types of squash did the dirty (pollen-wise, of course) and produce what’s called an allotetraploid baby. Geneticists figured this out by sequencing the modern pumpkin’s genome and comparing it to other squashes in its family. ‘Tetraploid’ means it had four copies of each chromosomes, and ‘allo’ means that each chromosomal pair came from different species. Often when this happens the DNA eventually loses genes and over time becomes diploid again. Not so with pumpkins. Pun’kins lost their duplicate chromosomes randomly, leaving them with just two of each chromosome, one from each parent—which is almost human of them.

Since the pumpkin genome hasn’t changed a whole lot since then, that means today’s jack-o-lanterns are almost identical to ancient ones (assuming that early humans carved gourds).

All this might seem a little irrelevant now, but the pumpkin genome could help agricultural scientists improve pumpkins’ shape, color, or heartiness. For most of our agrarian history, we unintentionally selected certain properties, then eventually breed intentionally, but still had little knowledge of which genes affected which physical traits. Today we can design better crops intentionally, using our knowledge of a plant’s genome.

Pumpkins themselves could improve with our newfound knowledge, even faster and more efficiently than we already breed them. And boy do we breed them. Farmers—and pumpkin enthusiasts—try to grow bigger and bigger gourds to win county fair blue ribbons and bragging rights. For a long time, this just meant watering the vines properly and carefully tending the plants to ensure they got the right mix of sun. Over time, people have selectively bred the largest pumpkins to produce genetically superior squashes like the Dill’s Atlantic Giant. Howard Dill created the varietal over three decades, and competitive pumpkin farmers all over the world now use his seeds to continue the Halloween Lord’s work. The record is already over 2,200 pounds, and increasing rapidly.

With the pumpkin genome sequenced, though, plant geneticists can learn more about how each gene influences the size, shape, and color, and could eventually edit the DNA to produce better gourds.

If you’re worried about these genetic mutants ending up in your pie at Thanksgiving 2025—don’t. That’s not really pumpkin anyway.