White Nose Syndrome In Bats Could Yield Clues About AIDS

Research on how the deadly fungus affects immune systems may help HIV research. 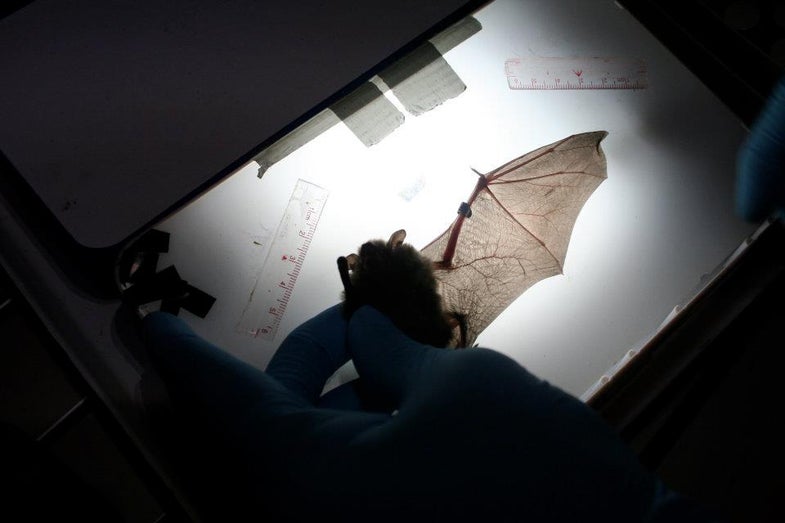 The millions of bats succumbing to a deadly fungal infection across the country will leave massive ecological holes in their wake–prime predators of insects are disappearing, for one, and cave flora and fauna that depend on bats could be in danger of collapsing. But research on the animals’ immune responses could have one silver lining: helping AIDS patients.

Biologists think white nose syndrome kills bats in a couple of ways–first, by covering their faces and wings in a powdery white fungus that makes them itchy, causing them to wake up from hibernation and burn their precious fat reserves. Second, it damages the animals’ sensitive wing membranes, which causes system-wide injury that is still not totally understood. That also hurts their ability to fly.

Bat immune systems try to fight off the fungus, and apparently the system goes into overdrive when hibernating bats wake up. This is called immune reconstitution inflammatory syndrome, or IRIS. It has never been seen before in the wild, and has only been observed once–in AIDS patients.

In people with AIDS, the immune system goes into overdrive after antiretroviral drugs suppress HIV infection and restore a person’s health. The immune system then tries to fight off any other underlying infection. In bats, this happens after the animals wake from their winter torpor. During that stage, the immune system is suppressed, which allows the Geomyces destructans fungus to colonize the bats’ skin in the first place. In both cases, the awakened immune system goes out of control and attacks healthy tissue as well as infected cells.

Carol Meteyer, a scientist with the U.S. Geological Survey, noticed the phenomenon while studying sick bats in Wisconsin. “It’s cellular suicide. [The immune system] comes out in a huge wave, going out to those areas of infection and kills everything,” she told the Washington Post. Now she and colleagues at the National Institutes of Health aim to study the similarity between bat and human immune systems, potentially learning how IRIS works in people.

The hypothesis about bat IRIS was published last month in the journal Virulence.