The perils of taxonomy in the age of genetics 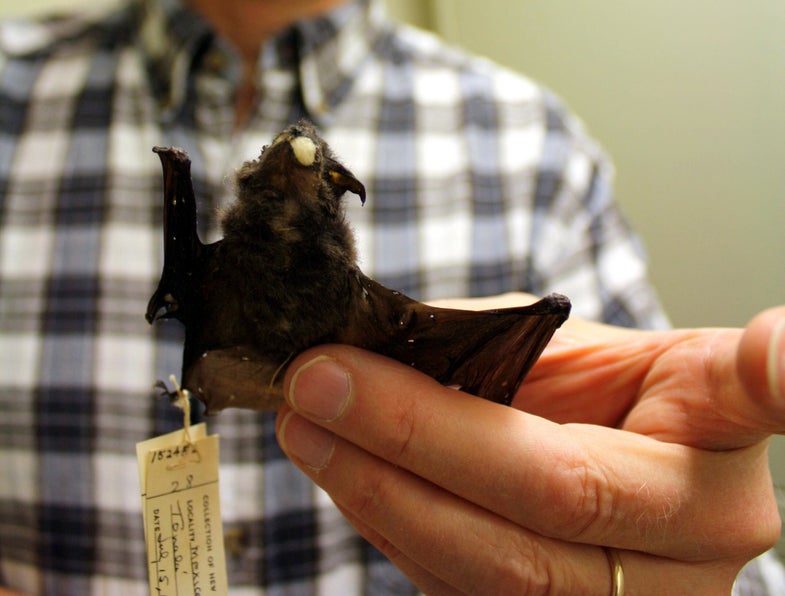 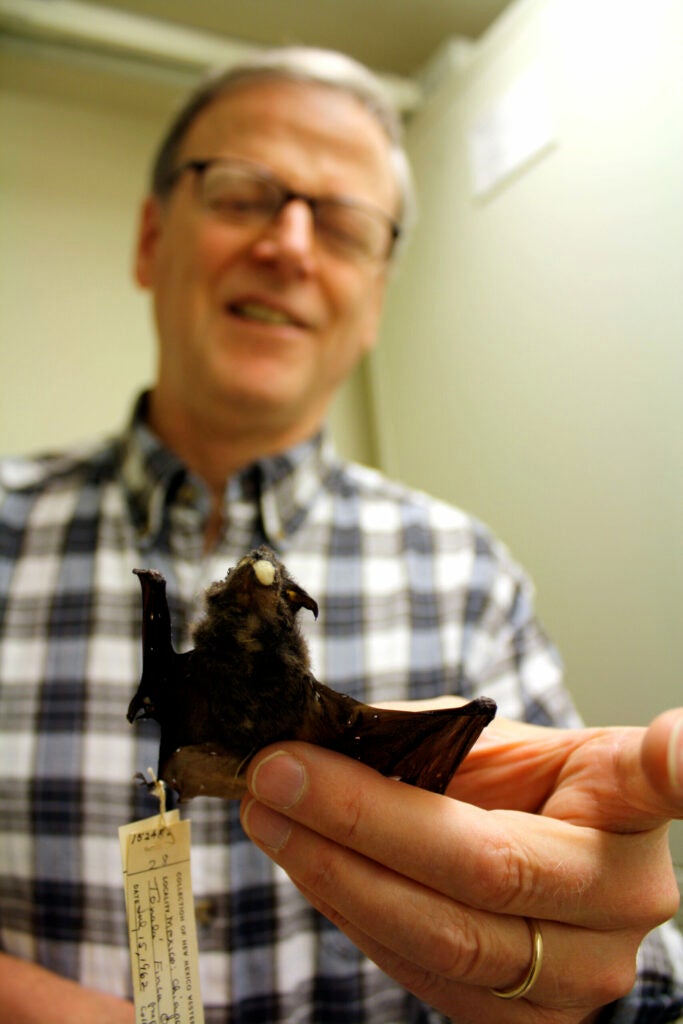 What Bat Is That?

Biologist Bruce Patterson inspects one of 58,000 bat specimens, representing more than 500 species, housed at the Field Museum of Natural History.

Deep within the labyrinthine interior of the Field Museum of Natural History in Chicago, at the end of a cluster of corridors and stairwells, Bruce Patterson stands amid a collection of more than 58,000 bat specimens. The collection at the Field is a microcosm of natural history, told in bats.

Patterson strides from one bay of drawers to the next, naming the genera and species contained within each stack. Stopping at random, he opens a drawer: an array of bats from the Neotropics, laid out like a squadron. Each bat is reduced to a stuffed pelt, its wings outspread as if mid-flight, and a vial containing its cleaned skull and mandible. Many of the specimens were obtained more than 60 or 70 years ago by intrepid field biologists like Patterson in far-flung locations like Nepal, Somalia and the Philippines.

Many bats were netted in rainforests, or plucked from the roofs of caves like strange fruit. Occasionally, bats were simply shot from the sky. Browsing through the drawers, one still can find specimens that were brought down with birdshot, pellet holes in the dried papery skin between wing bones.

Every bat is tagged with a label identifying it by species, the date and location it was collected, and the name of the biologist who collected it. The integrity of the entire collection depends on the simple fact that every bat belongs to the species name on the tag affixed to its ankle, sometimes handwritten in spidery cursive that predates both Patterson and me.

But what if a specimen does not belong to the species written on its label? What if the collection is wrong? Patterson’s recent work, published last year in the journal Molecular Phylogenetics and Evolution, suggests that this might be the case. Such a finding has far-reaching implications. What if, upon closer examination, other specimens can be separated too, divorced into a constellation of interrelated but distinct species? What if, in fact, almost nothing is really what we think it is?

Sturnira lilium: the little yellow-shouldered bat. A medium-sized, fruit-eating bat with distinctive yellow-brown oval patches on its shoulders. At the end of its blunted muzzle, a spear-shaped nose-leaf points vertically into the air, as if balancing an inverted heart there. It is one of the most common Phyllostomid bat species in the New World tropics, found all the way from Sonora and Tamaulipas in northern Mexico, through Central America, and southward to Argentina and eastern Brazil. It occupies an enormous bell-shaped footprint. Except, says Patterson, that it doesn’t. 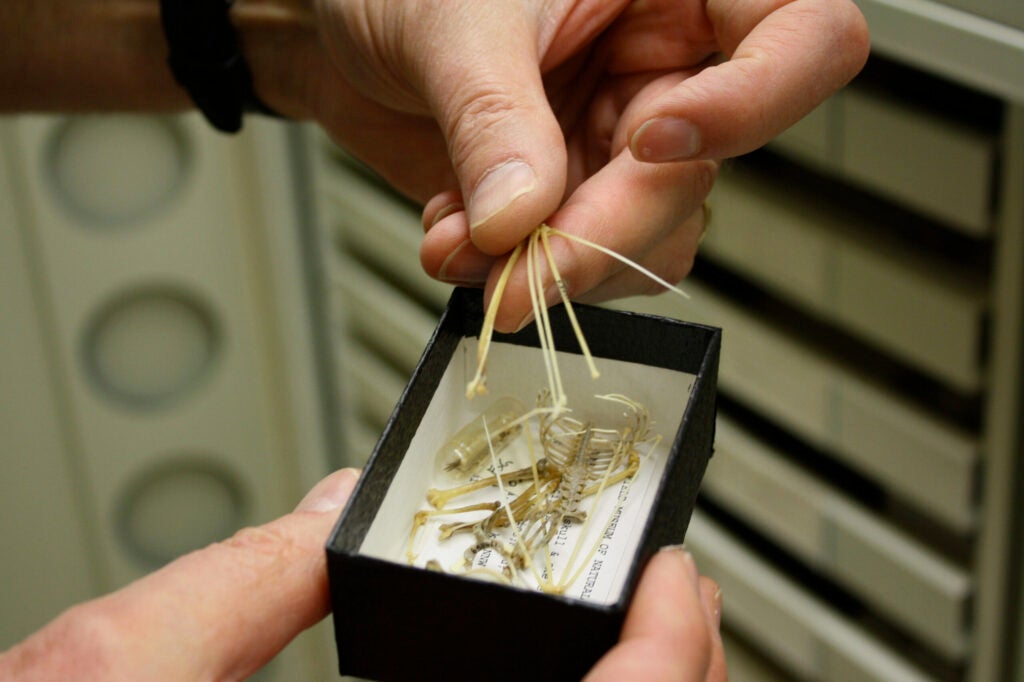 Each specimen is reduced to a crudely stuffed pelt and its bones.

Instead, Sturnira lilium — regarded for decades as a single, well-defined species — is a complex of seven different species, each occupying its own circumscribed range. “It turns out that Sturnira lilium is actually restricted to the Brazilian shield of Brazil, Paraguay, and Argentina,” says Patterson. Ironically, almost none of the researchers who have studied Sturnira lilium — either in the thin air of the Andes, or beneath the wet green canopy of the rainforest — have actually seen one. “All of the literature actually corresponds to a different species of bat,” says Patterson. “The behavior, the dietary studies, the ecology, the parasites: all of that needs to be revised.”

And that can be difficult. Increasingly, field biologists like Patterson are using novel techniques to identify new species, recategorize known species, and to study speciation — how a species becomes a species.

Suddenly, Sturnira has become the single most diverse Phyllostomid bat genus in the Western hemisphere.

Patterson and his graduate student Paul Velazco began by collecting specimens. Tissue samples came from multiple locations — more than one hundred and thirty specimens in all. Some were collected live in the field, in Central and South America by biologists. The majority — almost a hundred specimens — came from museum collections like the one at the Field: from across the United States; from Brazil, Canada, Peru, and elsewhere. Using molecular techniques, Patterson and Velazco compared DNA isolated from each Sturnira specimen, searching for subtle differences in its genetic code based on where it was collected.

“There are places where two species occur,” Patterson says, “but for the most part it’s like a jigsaw puzzle — one piece replaces the other and presumably serves the same ecological role that its counterpart serves in that adjacent real estate.”

In a moment, one species becomes seven. Three of them are completely new to science. Velazco and Patterson have scrutinized the specimens, describing them morphologically for a second paper recently submitted for review.

“Some occur up to four thousand meters in the Andes,” says Patterson. “It’s cold. It’s cloud forest habitat. And they’re really hairy. Whereas others are down in sweltering lowland forests, and they tend not to be very hirsute. There are differences like that. As soon as you see a skull, there are dental and cranial differences that also help to tell these apart.”

With these newly published data, the larger Sturnira genus of bats to which Sturnira lilium belongs has grown too, ballooning from a known handful to a wide, diverse group. “About 1960,” says Patterson, “there may have been four or five species of Sturnira bats. That eventually grew over the years to fourteen species in 2005. But with our study we’ve documented twenty-three genetic units that seem to bear the hallmarks of species.”

The implications are wide-ranging — and impossible to ignore. One of the previously undescribed species is found only in a narrow coastal territory that runs south along the Pacific seaboard from Colombia to Ecuador. As deforestation strips it of its habitat, it has become an immediate conservation target. Another species is limited to the Lesser Antilles, a chain of rocky volcanic islands in the Caribbean Sea. Suddenly, Sturnira has become the single most diverse Phyllostomid bat genus in the Western hemisphere. 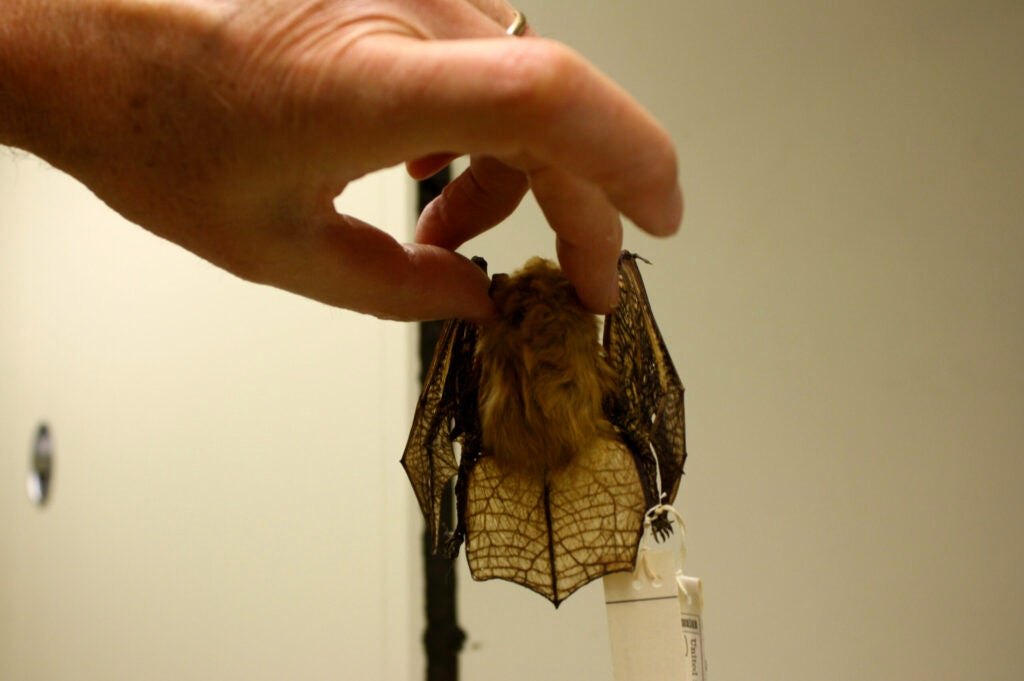 Molecular techniques can be used on stored tissues to describe new species.

How many other species are nested like Russian matryoshka dolls within the name of another species they closely resemble? Perhaps other species mistaken for Sturnira lilium have already become extinct, disappearing even before taxonomists had the opportunity to describe them properly. It is unknowable now. Researchers have identified bat species on the basis of the parasites that inhabit them — different parasites preferring different bat species. These data can help them calculate how long ago each Sturnira species diverged from its common ancestor, creating an overgrown taxonomic tree that seems still to be growing.

“If you have more sensitive measures, you can invariably subdivide the range of wide-ranging and presumably abundant species,” says Patterson. “Often, what happens is that this wide-ranging thing that no one was worried about suddenly becomes three or four narrowly-endemic species that may occur on a small fragment of habitat remaining in their particular part of the original species range.”

Patterson pauses for a moment, perhaps considering the collection of thousands of bat specimens amassed behind him.

Christopher Kemp is a scientist in Michigan. His most recent book is Floating Gold: A Natural (and Unnatural) History of Ambergris.