The smoke will likely impact a few fancier grapes. 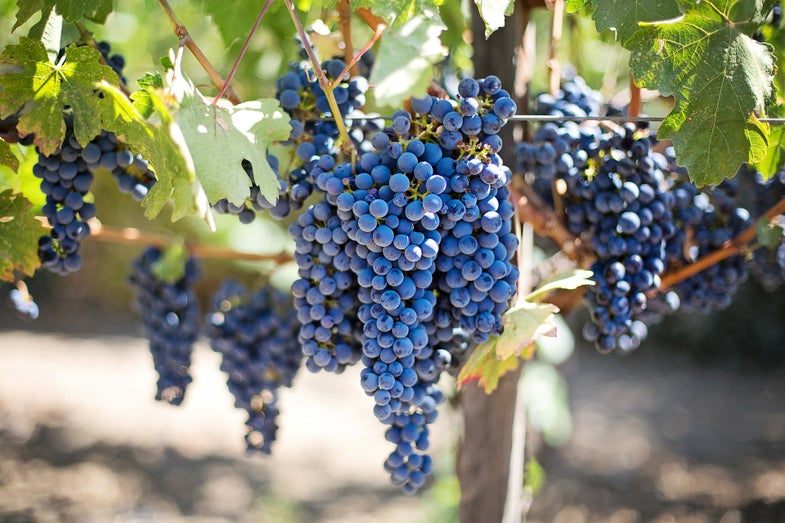 This month, Northern California experienced some of the worst fires it’s ever had, killing dozens of people and leaving thousands without homes. The ongoing fires started in Napa and Sonoma counties and spread to Mendocino and Solano, all regions world-renowned for their wine. While it’s certainly far from the biggest concern in the midst of such tragedy, some are wondering how the local grapes—and the local wine industry—will fare in the wake of the fire.

The short answer is that most of the region’s wine is probably okay. Though Napa and Sonoma are known for their high-quality nectars, the majority of California wine comes from the state’s Central Valley. According to a report out last week from the University of California, Davis, the Central Valley produced about 70 percent of California’s winegrape harvest last year. So everyday, average-priced wine is unlikely to be affected.

Napa and Sonoma are famous for their fancier—and pricier—vintages. But while some of those wineries may have suffered devastating damages, this isn’t likely to have a huge impact on an industry-wide scale. The fire has damaged more than a dozen wineries, but this area is home to over 1900. UC Davis’ report, authored by James Lapsley, an adjunct professor in Davis’ viticulture department and Daniel Sumner, head of the University of California Agricultural Issues Center, estimates that the damage accounts for “less than one percent of the total Napa and Sonoma processing capacity.” The majority of the vineyards themselves are also probably okay, since the fires mainly occurred on grass and wooded areas, and on hillsides. As the report notes, vineyards are typically on the floors of valleys so the total acreage lost is likely very small.

The greatest impact to the region’s wine production is going to be from the effects of the surrounding smoke on grapes that are still on the vine. But it’s impossible to say how heavy a toll that will take. The Napa Valley Vintners, a trade-association of Napa County wine producers, issued a press release stating that an estimated 90 percent of this season’s grapes were picked before the start of the October 8 fires. Those remaining 10 percent, according to Sumner and Lapsley, could have been tainted by the smoke that infused into the area.

What is smoke-taint and how can it affect grapes?

Wood contains lignin, an organic compound that helps create structure and support for the plant. When it’s burned, the chemical reaction produces and releases compounds called free volatile phenols. Smoke contains large amounts of these phenols. When it passes into a vineyard, these compounds enter into grapevines through the waxy cuticles on berries themselves. There, they react with sugar to create glycosylated (any combination of sugar and another compound) phenols. If you do nothing to them, these glycosides will not give off any horrid aromas. However, during fermentation—the key to turning grapes into wine—the glycosides have the potential to break apart and release volatile phenols into the wine that have a smoky, campfire-like aroma. This process is what winemakers and connoisseurs call “smoke taint.”

Unfortunately, 10 percent is nothing to brush off. The UC Davis report estimates that this percentage, which they reckon to all be grapes for the Cabernet variety (these are typically picked later in the season), could amount to losses of about $106 million for Napa Cabernet and $69 million for Sonoma Cabernet.

That would be if all 10 percent of those yet-to-be picked vineyards were smoke tainted. But smoke-taint itself is complicated. It can take time for volatile phenols to settle into the berry, so it’s often recommended that the grapes get picked as soon as possible after smoke exposure. In its press release, the Napa Valley Vintners states that the remaining grapes left on the vine will be picked within the next 10 days, which could halt some of the effects of smoke-taint. Further, the differences in processing of various wines can influence how much of an effect smoke taint will have, too. Some studies have found that the production process of Semillon or Sangiovese make it more sensitive to smoke taint than the production of Cabernet. So, given that Cabernet is likely what’s being made, that’s perhaps the best case scenario.

And winemakers do have some hope of getting rid of the compounds during and before fermentation. The Australian Wine Research Institute has a whole list of best practices which include being careful not to break the skin of the berry for as long as possible, keeping the fruit cool, and adding smoke chips and tannins. Wine researchers also have a better understanding of the science behind smoke taint than in the past, which could help them, in the future, to find ways to prevent smoke from permeating into grapes in the first place. According to Nexus Media, this could mean cultivating grapevines with less of the enzyme that helps bind phenols to sugar, or adding additional sugar to the fermentation process to block out the offending aroma.

Is this going to become a bigger issue for wine industries in the future?

To a certain degree, the timing of the fires—after 90 percent of the grapes in the region had been harvested—meant that the amount of smoke taint that results could have been far worse. Rising global temperatures and extended drought due to climate change will likely increase the risk of wildfires like these. Future blazes could happen earlier in the growing season, affecting a larger percentage of the berries. Or, the flames could spread to reach the vineyards themselves.