“Map of Life” Shows the Location of All Organisms, Large and Small

Ever wonder exactly where grizzly bears live on this continent? Or where you might find Myotis lucifungus, the fuzzy, adorable... 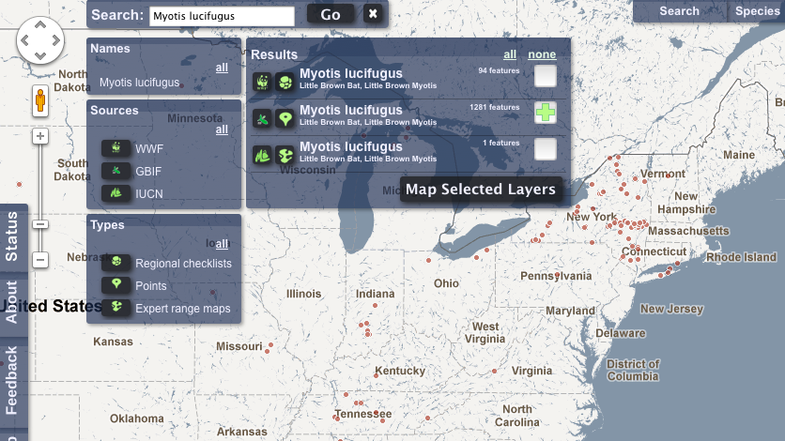 Ever wonder exactly where grizzly bears live on this continent? Or where you might find Myotis lucifungus, the fuzzy, adorable little brown bat that is currently threatened with extinction because of white-nose syndrome? Now you can track them on Google Maps, thanks to a new program that aims to plot the location of every single living thing on Earth. It’s kind of like the Gawker Stalker, only with lemurs instead of Malcolm Gladwell.

This ambitious project, called the Map of Life, uses a Google Maps platform to map the known distribution of 30,000 species of terrestrial vertebrates. Many more are still being added, with the eventual goal of curating hundreds of thousands of plants, birds, fish, reptiles and everything else under the sun. Meanwhile, there’s still plenty to search. The project just opened to the public.

“It is the where and the when of a species,” said Walter Jetz, associate professor of ecology and evolutionary biology at Yale University, who leads the project.

It’s supported by NASA, international research institutions and the Encyclopedia of Life project, itself a monumental undertaking that aims to catalog all there is to know about every species on the planet.

Visit the MappingLife page and you’ll see a plain Google Maps view of Earth, which you can pan and zoom like any other. A series of filters lets you search by species, whose known distributions appear as points on the map. You can display records from specific study areas, like nature reserves or large regions. You can even see what species are located in the vicinity of any location on the planet — set the search radius and group of interest (birds, mammals, etc.) and right-click on any point of the map. A list appears with every species found in your radius.

Also notice the sources for some of this data. It includes museums, local checklists and research institutions, published studies and global groups like the World Wildlife Fund. The goal is to share knowledge and identify gaps — it’s surprising how little is known about some species, the team says. Improving that information will require collaboration from lots of groups. The more complete it is, the more useful it will be for conservation organizations, wildlife managers and the public, helping people follow species’ changes over time.

It’s essentially an infrastructure, Jetz said in a Yale news release: “Something to help us all collaborate, improve, share, and understand the still extremely limited geographic knowledge about biodiversity.”

You can play with it here. 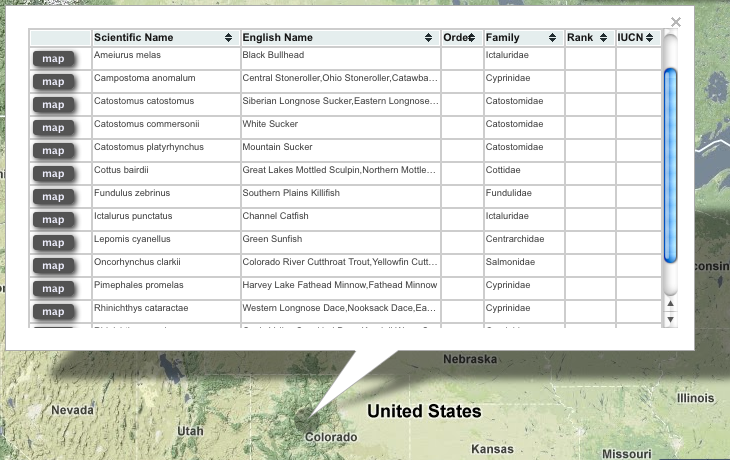 The Fishes of Colorado

You can search by area and classification, finding out every type of species that exists in a given radius. These are all the fishes found in north-central Colorado, for instance. Or you can search several species at once, overlaying them on each other to see where predators and prey live together.
Animals
plants