How New Zealand is avoiding hundreds of exploding whale corpses

Why do they explode in the first place? 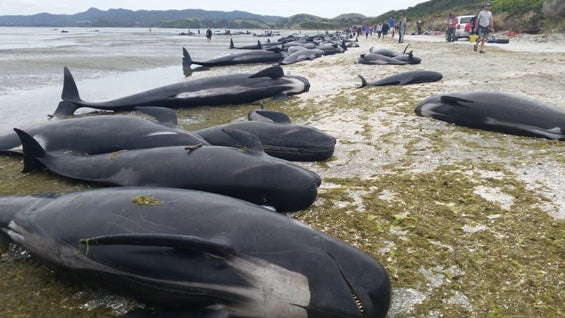 Much like a dream deferred, a beached whale explodes. It doesn’t happen 100 percent of the time, but when the resulting smell is “one of the worst smells in the world,” according to marine biologists, it’s worth it to figure out a way to prevent a whale of an explosion.

So when over 400 pilot whales (which are, confusingly, in the dolphin family) stranded themselves on Farewell Spit in New Zealand last week, the Department of Conservation needed to take action. Most of the whales had already died by the time rescuers arrived, and even after some were pushed back out to sea, most re-stranded themselves and died on the beach. The staff started preemptively puncturing the hundreds of bloated corpses.

Exploding whales tend to make the news, often because of the tragic beaching itself—but also because it can be pretty dramatic. There are compilations on YouTube, if you want to thoroughly gross yourself out. It looks like a naturally occurring version of a Mythbusters experiment. Intestines and bodily fluids spew out, the whole carcass rocks, and a burst seam spills organs all over the ground. Back in 2014, marine biologist Andrew David Thaler provided the following account of what decomposing whale smells like—and it will haunt you all day:

The exploding whale phenomenon isn’t necessarily exclusive to whales—they’re just the biggest and most violent offenders. Decomposing bodies, whether they be whales or deer or humans, release gases because the bacteria that break down flesh produce a variety of them as they digest their dinner. Whales just seal it in better.

Their thick skin and blubber don’t allow the gases to diffuse out very well, and sometimes the expanding corpse seals up its own holes to compound the problem. Puncturing the side of the body allows the gases to leak out slowly, thus avoiding an explosion. Ironically, it’s probably human interaction with the bodies that causes them to explode in the first place. As people push on the bodies and try to move them, they can rip holes in the skin that act like stress points in a faulty structure. One spot of weakness makes the entire body more likely to explode at that site. And if it’s warm out—like it is in New Zealand right now—the gases expand, increasing the pressure.

Human corpses can also explode in warm weather, but generally not without some help. We have too many orifices and thin skin, which makes it easier for gas to escape. But plenty of people don’t want to decompose naturally outside—they want to be put into a casket. A sealed casket. With a rubber gasket designed to be impermeable. Do you see where this is going?

A rotting corpse inside a sealed gasket can explode, and according to funeral director Josh Slocum, it happens not infrequently. You just don’t hear about it, because anyone who runs a mausoleum knows that bereaved friends and family would rather not know. In a way, though, a sealed casket is kind of like the human equivalent of a whale carcass. But hey—at least we don’t smell like rotting bacon fat. It’s more like rotting meat with cheap perfume sprayed on top. Or maybe rotten eggs and feces. But not bacon fat.