We just found the king of all extinct giraffe cousins, and it’s very goofy looking 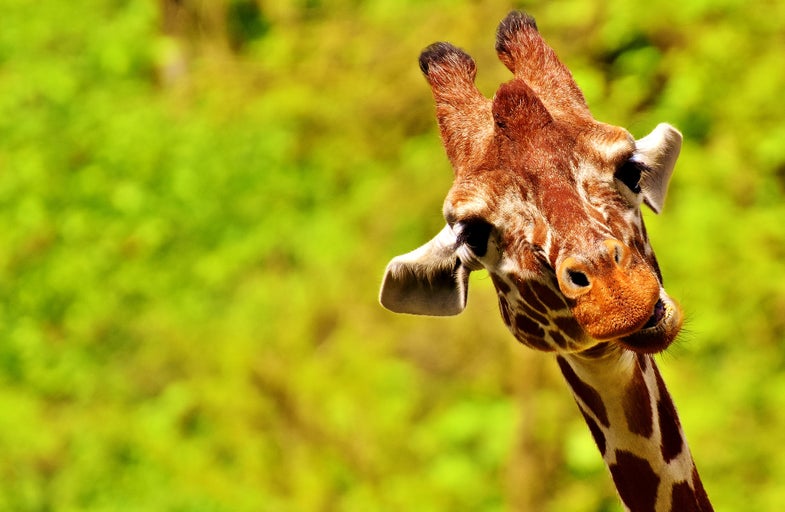 Our planet used to be filled with beautiful giraffids, roaming about on spindly legs with their dinky pseudo-horns. 23.3 to 5.3 million years ago was, presumably, a glorious time: The Earth was cooling down from the molten days of its youth, humans were venturing off on their own evolutionary path, and whales were multiplying throughout the oceans.

Over 30 species of giraffids existed at various points in the Miocene era, but tragically we have just two extant (that’s the opposite of extinct) varieties left: the humble giraffe and the stripe-butted okapi. The newfound relative of our modern-day long-necked friends is named Decennatherium rex, “rex” meaning “king,” not because it particularly large or impressive, but because more of its bones survived the millennia. Few giraffid skeletons that are even mostly intact—D. rex‘s fossilized remains are the most complete sets found so far. Paleontologists found pieces of several skeletons, some of which were largely intact, on a hill near Madrid, Spain where many other Miocene-era fossils have been discovered. They published their detailed findings on the new species in PLOS One on Wednesday.

A single new species of giraffid from millions of years ago might not seem like a particularly important find, but D. rex has actually provided a lot of insight into early giraffid evolution. Because these skeletons were unusually complete, they’ve allowed paleontologists to combine their newfound anatomical knowledge of ancient giraffids with the known phylogenetic information, so that they can understand more about how each branch of the Giraffidae tree formed.

It’s been difficult to figure this out before because giraffids had very similar skulls and teeth, so tracking the evolution of specific morphological features is tough—so much of each fossil looks the same, and could have evolved from any number of giraffid relatives. This means you need high quality cranial fossils, of which there are very few. But these new D. rex specimens are unusually complete, so paleontologists were able to reconstruct more of the phylogenetic tree.

Like its giraffid brethren, D rex. had what most people would call horns; what paleontologists would call “ossicones.” They’re a lot like the true horns that antelope and cattle have, onlymade of a slightly different material. Horns are living bone covered in hard keratin that grow continually over the animal’s lifespan. It’s worth noting (if only as a fun factoid) that horns and antlers are not the same thing. Antlers are also made of bone, but they grow covered in a substance called velvet, which has a ton of blood vessels that supply it with nutrients. Once the antlers are full-grown, the velvet sloughs off and the bone dies, which is why creatures with antlers lose them at the end of each season.

Ossicones aren’t horns or antlers. They’re made from ossified cartilage, hence the ossi- prefix. The little cones (get it? ossi-cones?) grow as cartilage and are then turned into bone, and they have skin growing over them—which is why they’re furry. Giraffes are born with ossicones, though they’re flat against their heads at first.

D. rex‘s ossicones are considerably larger, and it had four instead of the giraffe’s two. The smaller pair are similar to other giraffid ossicones, but the larger ones are curved and ridged, and they seem to vary quite a bit between individuals. It’s not clear whether that’s just a quirk or if the size has to do with the animal’s age. Just like with modern giraffes, the males probably had larger ossicones than the females (lady okapis don’t have any). Their unusually large headgear might have even meant they ruled the giraffid kingdom back in the Miocene.