A brief lesson in buoyancy and aerodynamics. 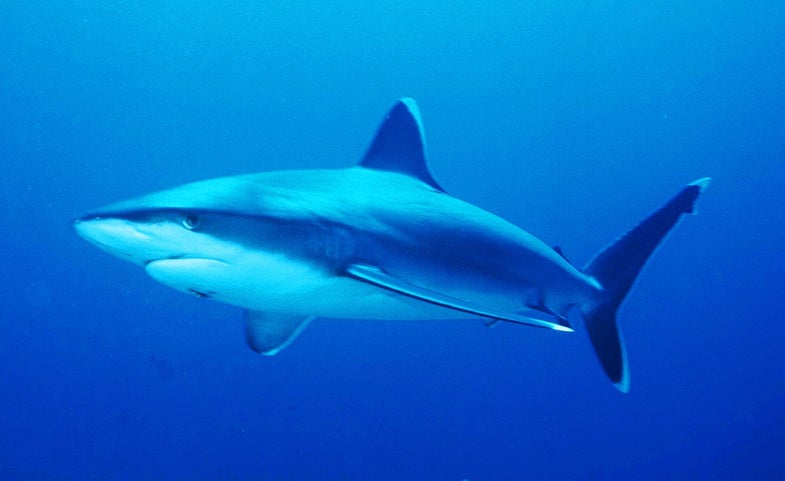 When you think of a zeppelin, you probably don’t picture a large, cartilaginous fish with rows of pointed teeth. But perhaps you should. There are similarities between the two that you’ve almost certainly never considered—and these shared aerodynamic properties have given us insight into how sharks evolved their buoyancy.

The thing about living underwater is that your body has to be approximately the same density as the liquid surrounding it. Too dense, and you spend all your energy trying not to sink. Too airy, and you just float right on up to the top. Land animals don’t have this problem, since we’re all more dense than air. But sea creatures have to evolve a way to balance their buoyancy and their ability to swim, or else they’d never survive in the ocean.

Fish do this with a swim bladder, which sounds like an old-timey swimming cap, but is actually an organ filled with gas that allows some swimmers to adjust their buoyancy at will. It looks rather like a fleshy, inflated balloon. Bony fish (that is, non-cartilaginous ones) can change how much gas is inside their swim bladder to float at any depth they’d like, without having to expend energy when they’d rather stay in one place.

Sharks don’t have that. Instead, they’ve evolved very fatty livers. Fat, in addition to being delicious, is much less dense than water. This is why (generally speaking) humans with more body fat tend to be more buoyant. It’s the same basic principle, except that we carry our fat on the outside and sharks store theirs in the liver.

But not all shark livers are created equal. Buoyancy is a delicate balance, and each species of shark has evolved a specific level of floatiness. Biologists from the U.S. and Australia set out to study how 32 shark species vary in density, size, and swimming habits to figure out how this balance actually evolved. They recently published their results in the journal Proceedings of the Royal Society B.

Some sharks, like Greenland or bramble varieties, swim exceptionally slowly at intense ocean depths, where the water is more dense. They need to be less buoyant at those sea levels—but also swim exceptionally slowly to conserve energy—so they need to have enough upward lift from their livers to allow steady motion. These are the blimp sharks; they’re perfectly adapted to constant motion at moderate speeds.

Other, faster species have different priorities. Blacktip and silky sharks live in relatively shallow waters, where they need to be able to catch lightning quick small prey. Having a less buoyant body allows them to maneuver more nimbly (as anyone who’s ever tried to swim in a life vest will understand), and more energy-efficiently. These plane-like sharks have smaller livers, often so small that the fish would sink if they weren’t moving forward. As a result, their fins are shaped like wings to provide upward lift in lieu of internal flotation support. The trade-off is that they’re poorly suited to slow, constant movement.

Your intuition probably tells you that bigger sharks tend to swim more slowly, and based on all this new information, that they probably have higher buoyancies. And you’d be right. Large sharks tend to have large livers, though that wasn’t necessarily a given. The researchers weren’t sure that the livers would scale in proportion to overall body size, or whether some species would have inordinately large or small flotation devices in their guts. But it turns out that the greater the liver volume, the larger the rest of the body needs to be to accommodate it—the additional liver doesn’t replace lean muscle tissue.

Of course, none of this means that blimpy sharks can’t also be terrifying, toothy, speedy predators. Sharks are still extremely efficient swimmers—it’s just that bulky, buoyant species are more energy efficient at slower speeds. The blimp-esque bluntnose sixgill shark is roughly 12-foot-long, fat-headed, and so sluggish it’s earned the noble nicknamed of “cow shark.” They are, however, distinctly un-blimp-like in their capacity to rip an animal to shreds with their six rows of teeth. Even large sharks typically rely on their speed, agility (and, let’s be honest, their toothiness) to catch food.

Sharks may be really good at hunting down their food, but these are killing machines that deserve more respect than fear. Even in the death trap colloquially known as Australia, sharks have only killed 16 people since 2000, and that’s the country with the most shark-related fatalities in the world. You’re more likely to die by cow attack or, for that matter, by deer—and that’s not counting how many people die in car crashes caused by deers. A literal deer just being a deer is more likely to kill you than is a shark is. Fear the deer—not the great white.