There’s no such thing as clean coal

It's not an industry we should save. 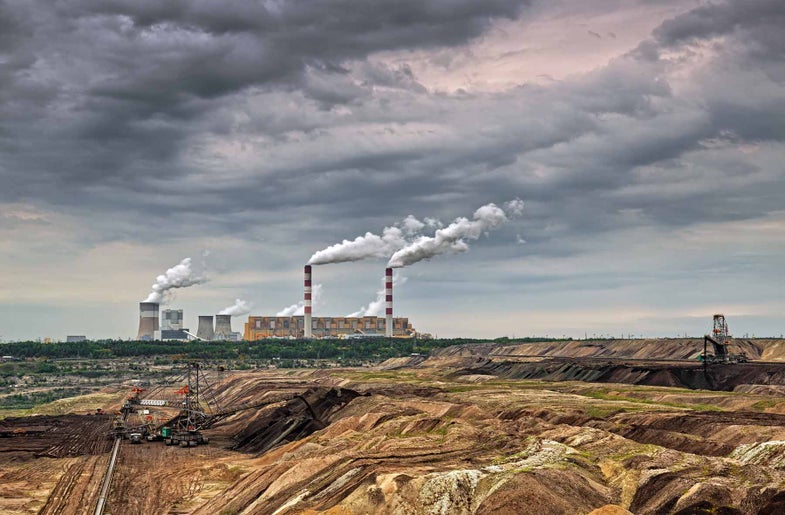 Between the wildfires, the hurricanes, and the droughts, one thing that this summer has made clear is not just that the climate is going to change, but that climate change is already here.

We can still work to make the effects of climate change less severe. But more and more, the decisions being made about those interventions seem less grounded in what’s best for the American people and more focused on benefiting a handful of special interests—specifically, propping up a flagging coal industry that currently employs fewer people than the fast food chain Arby’s. But even if you ignored the impact of coal power plants on carbon emissions, burning coal for power still wouldn’t be great for the environment. And it still wouldn’t be great for humans.

That’s because in addition to carbon dioxide, coal powered plants emit a host of noxious pollutants. For example, each year, coal fired plants pump out 146,000 tons of PM2.5 pollution, a form of particulate matter roughly 40 times smaller than a grain of sand. They also pump out 197,000 tons of PM10 pollution, a form of particulate matter or dust that’s 10 microns big. That’s small enough to slip through your typical mesh filter. Because PM2.5 and PM10 pollution are so small, when we release these particles into the atmosphere they don’t just stay there; we breathe them in. The pollution lodges deep within our lungs, which haven’t exactly evolved to handle this kind of invasion. As a result, PM pollution causes health issues ranging from asthma to heart attacks. A study released earlier this year found that every year, 3.45 million people worldwide die an early death due to PM 2.5 pollution alone.

And particulate matter isn’t the only pollution that coal fired plants pump out. We all know that we’re supposed to limit how much salmon and tuna we eat because they contain mercury, an element that can cause a host of neurological and developmental issues ranging from a loss of peripheral vision, neuropathy (the pins and needles feeling), difficulty hearing, speaking, and walking, and muscle weakness. If you think these all sound less than ideal, you’re right.

Fetuses and small children are especially at risk, because they’re going through crucial stages of development. When mercury interferes, it can cause lasting, harmful, changes. In the United States, an estimated 73,000 babies are born with an increased risk of permanent learning disorders due to mercury exposure in the womb every year.

But while most of us know the risks of mercury, few of us understand how mercury wound up in our fish in the first place. The short answer? We put it there. Humans release mercury into the environment through industrial processes, like when we convert crude oil into vinyl and when we mine for gold. But the largest source of mercury—more than 50 percent—comes from coal fired plants. So continuing to burn it is just not a great idea.

And even more pollutants are released when we burn coal (without even getting into the pollution associated with extracting coal from the ground and disposing of coal ash). You can thank coal for the Sulfur Dioxide (SO2) in acid rain, which destroys forests. Nitric Oxide (NO) and Nitrous Dioxide (NO2), which together are known as NOx and serve as the driving force behind smog, stem from coal fires as well.

So…why don’t we reduce the volume of these pollutants?

That’s what the Clean Power Plan, which the United States Environmental Protection Agency (EPA) introduced in 2015, was supposed to do. It focused on carbon emissions, not the other pollutants we’ve mentioned. Unlike other pollutants like lead and arsenic, carbon emissions were unregulated until the CPP. That’s a problem, because electric power plants are responsible for more than a third of the United States’ greenhouse gas emissions. But while the 2015 act focused on mitigating the effects of climate change, it brought the huge side benefit of shifting away from the dirtiest forms of electricity—like coal fired plants. The CPP may have put climate change front and center, but it was good news no matter what your views on climate science.

The EPA estimated that when fully implanted in 2030, the plan would reduce sulfur dioxide and NOx pollution by 20 percent. Kids would have 90,000 fewer asthma attacks, and 300,000 people wouldn’t have to skip work or school because the pollution had made them sick. But earlier this week, the EPA announced that it was going to repeal the plan.

But before the EPA had even finished writing the Clean Power Plan, current EPA Administrator Scott Pruitt (who was then the Attorney General of Oklahoma) sued to halt its development. The administrator, who has significant ties to the fossil fuel industry that stands to benefit the most from the Clean Power Plan’s repeal, argued that the EPA didn’t have the right to regulate power plant emissions under the clean air act after all. The Supreme Court disagreed.

The plan sets targets for states to reduce the amount of carbon released by their power plants to 32 percent below 2005 levels by 2030, but it doesn’t tell them how to do it. States can choose to invest heavily in renewables, or invest in natural gas. Still, when the EPA introduced its Clean Power Plan, there are some who saw it as an attack on the coal industry. And that’s not hard to understand: Even though coal only made up 34 percent of electrical energy mix (a mix that increasingly includes wind and solar) as of 2015, it was responsible for 70 percent of power plant emissions. The fastest way for a state to lower its emissions is to convert its coal powered plants to natural gas—something many municipalities are already doing because fracking natural gas is cheaper than goal. It’s worth mentioning that this isn’t the only regulation that the Pruitt led EPA has chosen to roll back – they’ve pushed back against new rules limiting the amount of heavy metals like mercury would end up in our waterways.

Estimates made as part of the Clean Power Plan suggest reducing carbon emissions would actually be cheaper for consumers. They estimate that the plan would shave $7 off the average monthly electric bill. For every dollar invested in the plan, the country would see $4 in reduced health spending. And we’re at risk of being left behind—the United Kingdom has pledged to shut down all of its coal plants by 2025.

With or without the clean power plan, the overwhelming evidence shows that coal is dying. Natural gas is already cheaper, and a report commissioned by Energy Secretary Rick Perry recently said as much. Natural gas killed the coal power plant, and renewable energy has the potential to power the world without destroying it in the process. Coal is over. The only question we should be asking is what we’ll use to replace it.