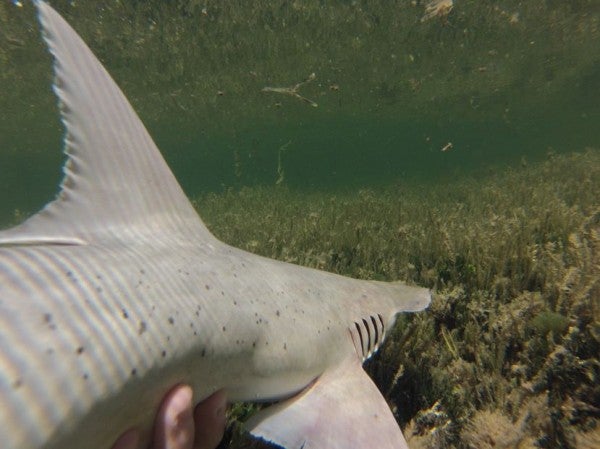 If you’ve ever wondered what the vegetarian sharks in Finding Nemo actually ate, you might ask the bonnethead shark. These little sharks don’t actually survive on nothing but plants, but they do eat quite a lot of seagrass. And they aren’t just swallowing plants and pooping them out undigested, either, scientists reported earlier this month at the Society for Integrative and Comparative Biology annual meeting in San Francisco. Bonnetheads can actually break down seagrass pretty efficiently, thank you very much, indicating that vegetation is an important part of this unusual species’ diet.

Bonnethead sharks are the most petite members of the hammerhead family, and only grow to about a yard long. Their digestive tract appears very similar to those of other sharks. “Up until ten years ago we assumed that they were carnivores like all other sharks,” says Samantha Leigh, a graduate student in ecology and evolutionary biology at University of California, Irvine who led the new research.

That changed in 2007, when scientists examined the gut contents of bonnethead sharks in the Gulf of Mexico. “Over half of their diet in some cases was this plant material, which is obviously really weird for a carnivore,” Leigh says.

To find out if the sharks are actually able to digest that seagrass, Leigh and her colleagues captured five bonnethead sharks in the Florida Keys and put them on a near-vegetarian diet for three weeks. Leigh coaxed the animals to eat their seagrass by feeding them “little sushi rolls,” she says. “I would create a bundle of seagrass and wrap a really thin sheath of squid around the outside and present that to the sharks, and they would eat ‘em right up.”

Though their diet was 90 percent seagrass, all the sharks gained weight during the experiment. When Leigh sifted through their poop, she was surprised to discover they’d digested over half of the plant matter. That means the bonnethead sharks are about as efficient at breaking down seagrass as sea turtles, which live and graze on the same meadows but are almost entirely herbivorous.

The researchers also found enzymes that break down plant material in the sharks’ guts. And when they sampled the animals’ blood, they saw a spike in the amounts of a nutrient that had been present in the seagrass. This suggested that the sharks’ bodies were actually making use of the plants they’d broken down.

Leigh is now trying to identify whether bacteria dwelling in the bonnetheads’ guts might help them digest the seagrass. “There’s probably a symbiotic relationship going on there that other sharks may not be able to sustain,” she says. Although some people have reported seeing lemon sharks nibbling mangrove leaves, there’s no actual evidence that any species of sharks other than bonnetheads eat plants, Leigh says. Even the bonnetheads probably aren’t chowing down on seagrass on purpose. It’s more likely the sharks swallow it while hunting crabs, shrimp, or fish in the seagrass meadows.

Unlike most of its hammerhead relatives, the bonnethead shark is not vulnerable or endangered. However, seagrass meadows are threatened by pollution, construction, and climate change. These environments are also extremely valuable to people, Leigh says. “They take [carbon dioxide] out of the atmosphere, they produce a lot of the oxygen that we breathe, provide habitat for a lot of the fish species that we eat.”

It seems that bonnetheads aren’t simply predators that control fish and crab populations from their position atop the food chain. Figuring out what roles they play in the seagrass meadow ecosystem might help us figure out how to conserve it. “It’s really important to understand how these sharks are eating, how they’re processing that food, and what they’re excreting and giving back to all these environments worldwide,” Leigh says.