Airmega 400S review: This smart purifier will clear the air and your bank account

It's beautiful and effective, but comes at a high price. 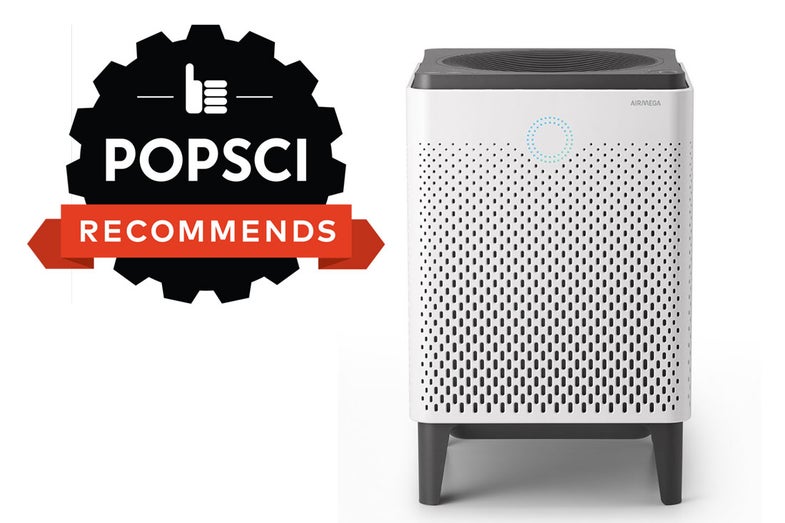 The Wi-Fi-connected Airmega 400S is designed to handle large indoor spaces (up to 1,560 square feet) and includes an onboard air quality sensor plus two kinds of filters that trap particulates as small as 0.3 microns, the HEPA standard.

Setting up this side-table-sized (23 x 15 x 15 inches) air purifier takes a total of 10 minutes and mostly involves peeling off a bunch of protective plastic and removing the wrapping from the unit’s two Max2 filters. Because this model also has wireless capabilities, it has a dedicated app that lets you set up air purifying schedules, check the air quality outside, and control the Airmega while you’re away from home. As with other connected smart home devices, this part of the setup process involves downloading following a handful of on-screen instructions in the app to connect the 400S to your Wi-Fi network.

While we didn’t have a fancy lab or equipment that could accurately measure particulate or VOC levels, we did subject the 400S to as many real world tests as we could dream up. We cooked, we lit candles and matches, we even emptied the contents of dirt and dust-filled Roomba near the air purifier. As the doting owners of a 110-pound, perpetually shedding dog, we also subjected the Airmega to the dander wonderland that is our home.

By chance, we also had the unit on hand during the tail end of the Napa fires this past October, a time when the entire Bay Area was being blanketed with extremely hazardous levels of fine particles. We used the Airmega during two of those days to see if it made our self-imposed (and EPA recommended) indoor quarantine more pleasant. (It did.)

Air purifiers are usually not paragons of thoughtful design. In fact, many can be downright hideous. Not only is the Airmega 400S likely to be one of the least ugly things in your living room, we’d even go so far as to call this boxy gadget attractive. This attention to design, while by no means mandatory for a product in this category, is refreshing given that these devices need to be placed out in the open to do their job properly.

The purifier’s stylish looks even inform its functionality. Its perforated sides allow the Airmega to suck in air from opposite ends, filter it through two washable pre-filters, an activated carbon filter, and a green true HEPA filter, and then push out the clean, easy-breathing stuff through a vent on top.

As far as operation goes, the unit has four modes: Manual, Sleep, Eco, and Smart. The latter automatically adjusts the fan speed according to the room’s current air quality without any direct input from you. Eco mode is more or less a sub-mode, and engages automatically while in Smart. If the air quality sensor registers clean air for 10 minutes, the Airmega will stop the fan and enter Eco mode, reactivating it only if the air quality goes down again. When in Sleep Mode the Airmega monitors whether the room it’s in is dark and if the air quality is clean. If the latter two conditions are met, it turns off the fan and the insanely bright LED indicator lights.

We played around a lot with the different modes, trying to get a sense of whether they kicked in and turned off when they were supposed to. What we found was that the Airmega not only transitioned from one mode to the other seamlessly, but it did so consistently and with virtually zero lag.

In fact, it’s kind of scary how fast the onboard sensor recognizes and reacts to pollutants. In Smart Mode, which is what we usually kept the Airmega in, the purifier would almost immediately bump up the fan speed when we were cooking anything that produced smoke. Same deal when we lit matches and a candle nearby. On the few occasions when our dog would shake or scratch himself within close proximity of the Airmega, it would also briefly boost fan speeds to filter out what was presumably a large dose of dog hair and dander. Again, we couldn’t directly measure particulate levels or pollutants, but the Airmega seemed to bump up its air purifying powers only when appropriate, which was great.

During the Napa fires, we generally kept all the windows and doors to our home shut, but on the few occasions we opened the front door to walk the dog or fetch the mail, the 400S registered the poor air quality and turned on the fan, clearing out the smokey, eye-watering air in a matter of minutes.

Still, for all its superior air cleaning capabilities, the 400S has one pretty big downside: the price. Even for those who suffer from severe allergies or other respiratory problems, $750 is a pretty gasp-inducing price—and that’s just for the purifier. You’ll also need to factor in electricity usage and replacement filters. As far as we can tell, that price mainly reflects the Airmega’s singular ability to rapidly clean a large volume of air. Indeed, after living with the air purifier for a couple weeks we can verify that it’s an extremely appealing skill—but one that’s probably more of a luxury than necessity for most.

The Airmega 400S’s formidable air cleaning abilities are almost certainly overkill for most people. But if you’re particular about particulate-levels in your home, live in an area with routinely poor air quality, or just want a highly effective, set-it-and-forget-it smart air purifier, cost be damned, the Airmega won’t disappoint.