Yes, the frilled shark is really freaky. But there are other ‘living fossils’ that are just as weird.

A short tour of the strange sharks chilling at the bottom of the ocean. 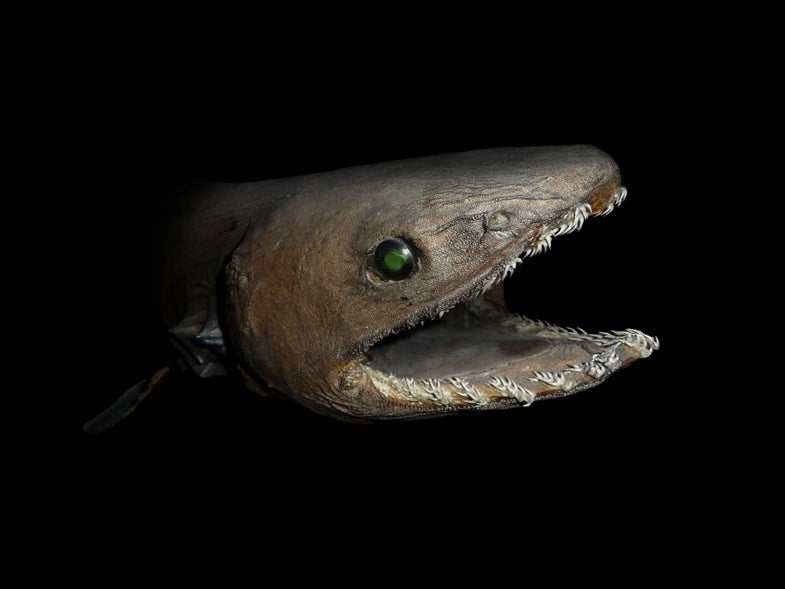 We’ve been here before: someone pulled something freaky-looking out of the bottom of the ocean, and now Google News is flooded with headlines about “dinosaur-era” or “prehistoric” sharks and “living fossils.”

Indeed, the frilled shark (Chlamydoselachus anguineus) looks like something from another (much scarier) time. But no, scientists didn’t just trawl up some time-traveling dinosaur fish.

“Living fossil conjures up the idea of long-lived species or organisms out of time longing for the good old days of the Devonian and disdainful of whippersnappers with their colour vision and adaptations to human pollution,” Mark Carnall wrote in The Guardian in 2016. But, he went on to note, the phrase is misleading: these so-called fossils aren’t actually identical to ones that lived in prehistoric times. The phrase usually refers to animals that have retained an unusual number of “primitive” features (quirks that were weeded out of all their cousins long ago), leaving them looking more like relatives that lived and died millions of years ago than their fellow extant species.

It might be the last remnant of an old lineage that has otherwise died out, but you better believe even the relatively isolated frilled shark has had to adapt and change at some point over the past few million years. Natural selection may happen sluggishly in the isolated confines of the deep sea, but it still happens. No species gets to sit this stuff out.

If this is your first time meeting the fair frilled shark, you probably think it looks rather monstrous—which only adds to the illusion that it comes from another world entirely. But in the deepest, darkest corners of the ocean, it has a lot of competition for the title of weirdest-looking shark. Here are a few other favorites:

Goblin sharks' use a technique called slingshot feeding to eat where they shoot out their jaws 14/10 Gob-win pic.twitter.com/zkbGb6Zd1E

Yes, Chlamydoselachus anguineus has a terrifying maw. Those 300-or-so bristle-like teeth are used to trap fish and squid in a predatory lunge.

But the goblin shark gives the frilled shark a run for its money in the maw department. You know how the alien in Alien has a jaw-within-a-jaw that pops out to attack its prey? Well, the goblin shark does that, too. The shark’s anatomy suggests it might be on the slow side, but the ability to quickly snap its jaw forward allows it to ambush passing prey without moving the rest of its body.

The goblin shark is also sometimes called a living fossil, as it’s the last remaining member of the 125-million-year-old Mitsukurinidae family. You’ll find it more than 4,000 feet below the ocean surface, assuming that you want to find it.

A cookiecutter shark sounds like it should be adorable, or at least boring. But while there’s nothing too shocking about its body, the creature’s name actually refers to the cookie-cutter-like wounds it leaves behind in prey. Oh, and it gets worse: the name is terribly misleading in the worst way. The shark latches onto its prey’s flesh and twists around, scooping out a deep chunk of meat with it saw-like set of chompers. That’s our best guess based on the wounds, anyway; no one has seen a cookiecutter shark feed.

“These chunks are conical, so the cookie-cutter metaphor isn’t quite right; ‘Ice cream scoop shark’ or ‘watermelon baller shark’ are more accurate, if less catchy,” Ed Yong wrote for National Geographic in 2013.

The resulting wounds are pretty gnarly, but you can see examples here.

This strange little pup is my personal fave; it looks like a truly mediocre puppeteer’s attempt at creating a shark for a Tim Burton film. The fish’s lineage broke away from true sharks and rays some 300 million years ago, giving them the lost-deep-sea-dinosaur appeal of the frilled shark with none of the frills.

The ghost shark is practically a surface-dweller compared to the species above—it chills out around 650 feet down—and may sometimes even migrate into bays to mate in the spring. As such, we eat it. The Florida Museum reports that the species is often sold as whitefish in Australia and New Zealand, ending up in fish and chips. So the next time you find yourself eating a fish stick down under, know that the meat may have come from a “living fossil.”

The bluntnose sixgill migrates vertically throughout the day (it goes up and down) but prefers to live some 6,000 feet deep. The species proves that fossil-esque features don’t necessarily look nightmarish; it’s known for sharing an unusually close resemblance with 200-million-year-old fossils, but it doesn’t look that weird—save for its particularly gilly neck (hence the name). Then again, weirdness is in the eye of the beholder. You may disagree.