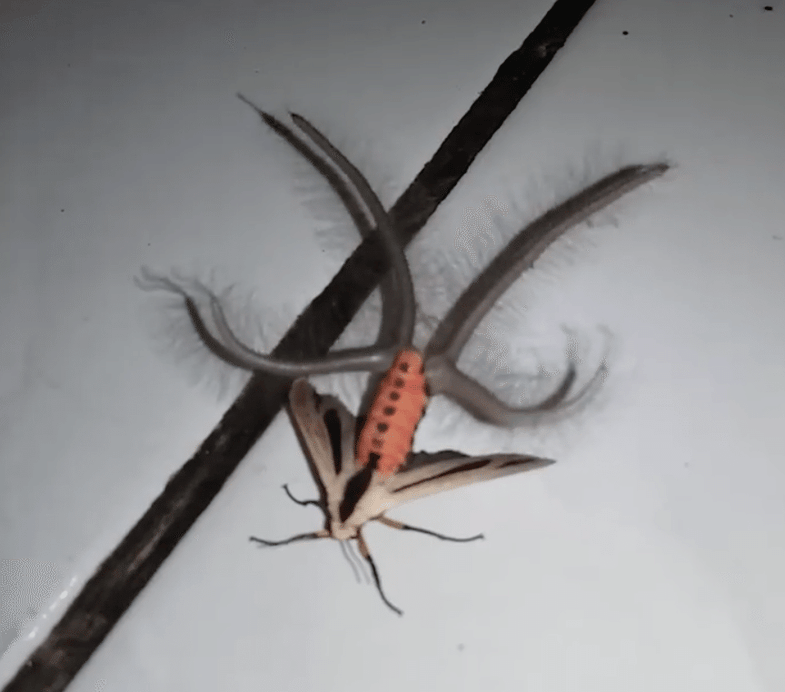 As I attempted to enjoy some homemade tomato soup on Sunday evening, Popular Science Editor in Chief Joe Brown derailed my chill by sending me a video on Facebook. This video:

My friends, I am generally fascinated by the range of strangeness that mother nature puts on display. But I have to admit that I kind of hoped this clip would turn out to be some kind of hoax. It was just too freaky. The way that caterpillar-y butt looks too bulbous and heavy for the delicate moth body it sits atop. The sheer length of the four (count them, four) tentacles affixed at the end. The way those tentacles wiggled and writhed. The fact that they were hairy. It was simply too much.

Alas, a quick Google search identified this very real animal as Creatonotos gangis, a moth found in Southeast Asia and Australia. Those furiously freaky tendrils are actually scent organs. The so-called coremata (also known as hair-pencils, which, ew) excrete pheromones, those scented hormones that many animals use to trigger certain behaviors in their fellow critters. The male, guided by the smell of a female’s own hormones, will unleash his hair-pencils (they’re usually stuffed inside the abdomen, which is somehow worse?) and flood the air with his own smelly signals. So, so romantic.

For those of us who aren’t from Australia, also known as the island-of-horrible-things-that-evolved-to-scare-and-kill-you, Creatonotos gangis seems so strange as to be impossible. But just as these moths are unfortunately real, many other seemingly absurd creatures prove that evolution can go to some dark, dark places. Here are a few other examples:

You know how the alien in Alien has a jaw-within-a-jaw that pops out to attack its prey? Well, the goblin shark does that, too.

Goblin sharks' use a technique called slingshot feeding to eat where they shoot out their jaws 14/10 Gob-win pic.twitter.com/zkbGb6Zd1E

The goblin shark is in the realm of animals that are periodically rediscovered by Twitter. And every time these swimmers make the rounds, the uninitiated gape in disbelief. Because, I mean, yeah. What the hell?

See also: the ghost shark, which honestly looks like the result of an extremely amateur puppet-maker being told to whip up a shark that could appear in a Tim Burton film.

The so-called blue dragon is oft shared as an example of a “real life Pokemon,” and we can’t argue with that assessment. This nudibranch (side note: we highly recommend checking out nudibranchs in general) floats on its back at the surface, held aloft by an internal air bubble. Also, it’s incredibly dangerous! According to PBS, Glaucus atlanticus loves to snack on the Portuguese Man O’ War. The Man O’ War looks like a jellyfish, but it’s actually a siphonophore. Which makes this kind of a two-for-one deal, because siphonophores are also way too weird to be believed. These creatures exist as a kind of floating colony; born as single embryos, they grow not by elongating their limbs but by budding entirely new beings called zooids, each with its own purpose. It’s as if a baby grew bigger by sprouting new heads and feet and butts as needed. Anyway, some of those zooids contain powerful stingers, and Glaucus atlanticus apparently finds them delicious. It can store the venomous power of those buds inside its own appendages, allowing it to sting any threatening parties it encounters.

Atretochoana eiselti is a limbless amphibian that looks a lot like a penis. A lot of animals look a lot like penises. You might think it would be impossible for so many living creatures to go about life looking so very much like human genitalia, but you'd be wrong!

Is it a bird or a bug? Sphingidae are commonly known as hawk moths, because, well, duh. They look like lil baby birbs. The hummingbird hawk-moth is especially uncanny, especially when it hovers in place before flowers all hummingbird-like. But this is actually a case of convergent evolution; that method of hover-flight was so nice, evolution did it twice (or four times, actually—hoverflies and some bats do it, too).

Okay, so, this is a fish with human teeth. This fish looks photoshopped AF. But I assure you, the pacu is perfectly real. They're related to piranha, but come sporting a set of straight, square chompers (and a slight overbite to boot). Pacu frequently make the news with rumors that they enjoy biting human testicles, which is actually just the result of a bad joke someone once made about their preferential diet of floating fruits and nuts. Keep this story in your heart the next time you feel tempted to make a bad pun about genitals. But while the testicle eating part is totally false, the weirdly human-like teeth are unfortunately real.

When photos of the "world's cutest rodent" circulated, many were quick to determine that the animal was actually made of felt. Which makes sense, because how could anything actually be that cute? Plot twist: the photo showed a fake critter, but the Baluchistan pygmy jerboa is totally real. It is, in fact, the world's cutest rodent, and we disagree vehemently with anyone who says otherwise. Smol. So, so smol.

The unicorns of the sea are weird looking because of how they are unicorns, in the sea. But they also really exist! For real. What a wonderful world we live in.

These Arctic-dwelling animals can sport spiraled tusks—which are in fact sensitive, enlarged teeth—up to 10 feet long.

Okay, biology twitter, what the heck is this?? Found on a beach in Texas City, TX. #wildlifeid pic.twitter.com/9IUuuL65qh

Whenever something unusual washes up dead on a beach, the internet likes to buzz about how "mysterious" this "sea monster" is. But they're usually just your run-of-the-mill dead things. Read more here.

Yes, you know the platypus is real. But 18th-century scientists weren't so sure. "It naturally excites the idea of some deceptive preparation by artificial means," English zoologist George Shaw wrote in 1799. Shaw eventually determined that the strange specimen before him was indeed an actual animal, and went on to describe the species for the first time. But you can't blame him for being unsure: the noble platypus looks like someone sewed a duckbill onto a beaver. It doesn't even look like a fake animal that anyone put any thought into. It looks like a bad attempt at a mythical creature. Scientists also spent decades debating whether or not the mammals truly laid eggs (though Australian Aboriginals knew this because of how they routinely saw the darn things laying their darn eggs) and the veracity of reports that males packed potent venom.

In short, don't feel too bad when you find yourself skeptical of an animal that turns out to be a real-life organism just trying to mind its own business. It happens to the best of us.