No, menstrual blood does not attract sharks

It's safe to surf during shark week. 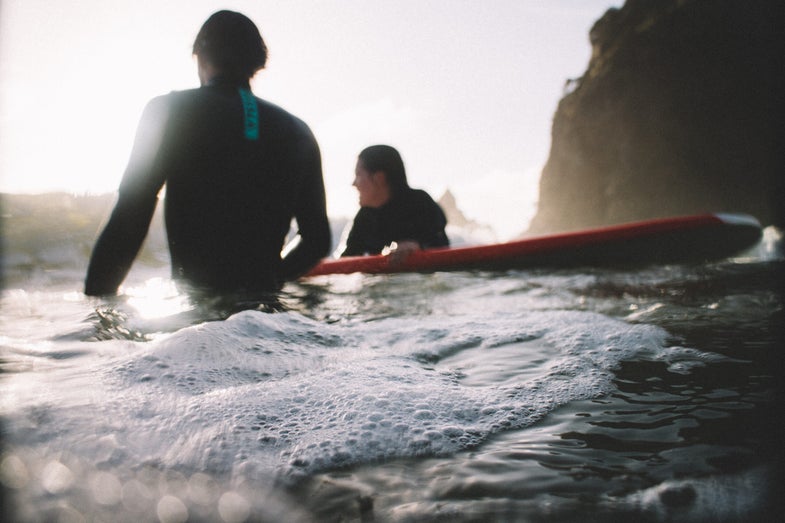 Humankind has a long and storied history of misunderstanding the menstrual cycle. There was that time when NASA offered astronaut Sally Ride 100 tampons for her week-long mission to space. There’s that super pervasive (and totally unsupported) myth that if you put a bunch of menstruating humans in the same space, they’ll eventually “sync up” and get their periods en masse. Not to mention the countless religious and cultural traditions that deem the natural process to be somehow evil, unsanitary, or unclean.

We could turn PopSci into PeriodSci for a week and still not have time to debunk every myth related to monthlies. But today we’ve got an exceptionally absurd one to tackle: Does period blood attract sharks, making menstruating individuals (and their unfortunate swimming companions) more vulnerable to vicious shark attacks?

Short answer: no. Follow up: why are we even talking about this? Because apparently, it still needs to be said. During a recent video interview with TMZ, surfer Laird Hamilton—who, to his credit, did some very sound myth debunking by reminding viewers that shark attacks are incredibly rare—stated quite matter-of-factly that “the biggest, most common reason to be bitten is a woman with her period, which people don’t even think about that. Obviously, if a woman has her period, then there’s a certain amount of blood in the water.”

But he has a point, right? Because sharks smell blood.

It’s true that sharks have a bloody ridiculous sense of smell. Their nostrils exist for the sole purpose of smelling—not breathing—and they’re very sensitive. Chemicals dissolve into the water of the ocean and that water hits a shark’s sensitive nasal tissues, sending a smell signal to the brain. Here’s more info from the American Museum of Natural History:

So yeah, sharks love them some blood (or the amino acids inside our bodily fluids, anyway)—and they can smell really well. But not that well. If that whole “a shark can smell a drop of blood in a swimming pool” thing were true, sharks would be constantly overwhelmed by the cacophony of smells surrounding them. The Great White Shark can probably detect a drop of blood in about 100 liters of water, which is about 1/25,000th the amount of water in an olympic pool.

It’s a period, not that scene from “Carrie”

The average menstruating person loses about 30 to 40 ml of blood over the course of several days, maxing out around 80 ml for a really heavy cycle. Basically, if you suddenly got a super heavy period and just expelled all of that blood in one go (which, to be clear, is not how periods work), you’d be dumping about 6 tablespoons of blood into the ocean. This is also assuming you’re out there without so much as a tampon to your name, which is really unfortunate given that you just got hit with a totally improbable period scenario! But rest assured, dumping a third of a cup of human blood into the ocean is unlikely to send nearby sharks into a feeding frenzy. And once again: that’s not actually how periods work. Menstrual ‘blood’ isn’t just blood. It’s also the lining of your uterus, cervical mucus, and other totally normal secretions. Your standard menstruating swimmer is going to leave behind the tiniest traces of blood in the water, if any.

In a 2016 explainer on this same subject—because yeah, people keep asking—Broadly asked Steve Kajiura of Florida Atlantic University’s Shark Lab for his input. He made the point that even when sharks can smell human blood, it’s not like they interpret it as a loudly clanging dinner bell. They’re sniffing for the scent of their prey of choice.

Sharks aren’t even interested in blood so much as they are in detecting amino acids, the building blocks that make up the proteins in all of our bodily fluids. What they want to detect are the amino acids from the blood, guts, and gooey bits of marine animals—the creatures sharks evolved to eat. Our blood, sweat, tears, pee, and cervical mucus are just static noise.

“You can smell a landfill, but it won’t make you want to eat it,” Kaijura said.

Let’s be clear here: periods do not cause shark attacks

“This is one of those misconceptions that refuses to die,” Chris Lowe, a shark researcher at Cal State University of Long Beach, told The Huffington Post in response to Hamilton’s comments. “In fact, the amount of blood loss during menstruation is probably less than average scrape or cut that a kid or surfer may get while playing in the water.”

“I’ve been diving for decades and even got my period while underwater with a school of hammerheads,” Marie Levine, founder and executive director of the Shark Research Institute, told Mother Jones back in 2012. “The sharks were not interested and I had to fin like crazy to get close to them.”

But what if I’m really, really afraid of getting eaten by a shark?

Don’t blame that on your menstruating friends! Outside Magazine points out that the best way to avoid a shark attack is to keep swimming at a nice, consistent pace so sharks don’t single you out as weak, easy prey. And hey: don’t be a dummy when you’re out in the surf, but try to remember that humans are way more likely to kill sharks than the other way around.