Yetis are real, they just also happen to be Himalayan brown bears

Don't worry, it's still an awfully mysterious bunch of bears. 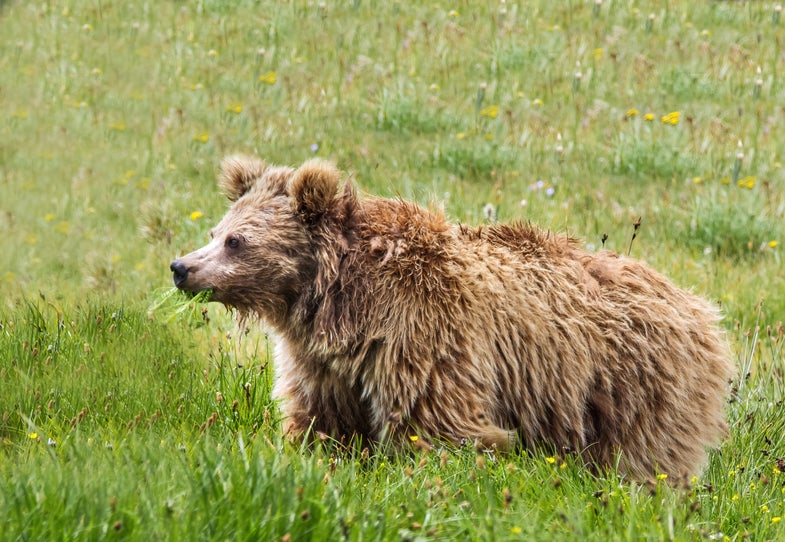 It would be easy to dismiss the myth of the yeti as just that: a myth. There’s no conclusive evidence that a giant, ape-like creature lives in the Himalayas (or anywhere else, for that matter). But the beauty of science is that we don’t just have to roll our eyes. We can test the hypothesis.

And yetis, as it turns out, are real. That is, if you’re willing to accept “yeti” as the nickname of a reclusive (but not at all undiscovered) population of bears high in the Himalaya mountains. We probably know less about these very real bears than we “know” about the yeti, which is why biologist Charlotte Lindqvist was so interested when the Icon Film company reached out to her with a proposition.

Lindqvist had researched an ancient polar bear that, according to a 2014 study, was the real culprit behind yeti lore. Icon Film wanted to know if she thought that was plausible, given criticism the study drew. Was the yeti really this an extinct beast, or was it instead a hybrid between polar and brown bears? Or was it possibly a local type of bear with few studies to its name? And by the way, would she like to get access to rare samples from those local bears?

Why yes, yes she would. As an expert in bear evolution, the University at Buffalo’s Lindqvist wasn’t so much captured by the idea of a yeti as she was by the thought of getting her hands on Himalayan bear hair samples. These creatures live high up in snowy mountains, and they generally don’t want to be found. They’ve hardly been studied, much less at a genetic level, and Lindqvist saw an opportunity to work out a bit of the Ursidae evolutionary tree. Correcting yeti misconceptions would just sweeten the pot.

That previous paper didn’t really prove what it claimed to prove. It looked at a sequence of mitochondrial DNA (yes, the powerhouse of the cell is used in genetic sequencing), but the particular region the scientists focused on is highly conserved in bear populations. That means that polar and brown and black bears all have extremely similar, if not identical, sequences there. It makes no sense to claim that a sample matched an ancient polar bear based on this stretch of DNA, because that sequence would match almost any bear.

To confirm a real match, you have to look at more variable parts of the mitochondrial DNA. So that’s exactly what Lindqvist did. And in the process, she and her international team in Pakistan and Singapore provided the first strong evidence that presumed yetis are actually bears. They published their results in the Proceedings of the Royal Society B on Tuesday.

Icon Film secured nine samples that purported to be genuine yeti artifacts, and Lindqvist gathered 15 samples from known bear populations. By sequencing mitochondria from all these sources, she and her fellow researchers were able to determine that all but one of the yeti artifacts actually came from local bears. That last sample was from a dog.

They also figured out that Himalayan brown bears split off from the rest of the regional bear population several thousand years ago, which is why they’re so genetically distinct from most other brown bears. Living in geographic isolation for so long has separated them from other Asian brown bears, and even from their relatives on the nearby Tibetan plateau. They even look different. But prior to Lindqvist’s work, it wasn’t clear just how long Himalayan bears had been on their own. Researchers will need higher-quality samples to figure out the whole picture, but even this small step is major for a species that’s hardly been studied.

We don’t know a lot about Himalayan brown bear behavior, since they’re rare and tend to shy away from people, but bears make sense as a source of mythology. “We know that bears can be aggressive and get up on their hind legs, so they may have been attacking livestock or ravaging local villages,” says Lindqvist. “It’s not that surprising that a large animal like that could feel scary and lead to myths, especially in a culture that lives in very close connection to their environment.”

None of this is that surprising. If people think there’s a tall, furry creature that can stand on two legs and kill cattle, it’s a small logical leap to think that they’re probably just talking about bears, and not some fanciful ape-ish creature. But it’s still worth investigating. Plenty of other cryptids—the pseudo-scientific term for mythological animals—have turned out to be real.

When indigenous people in the Congo spoke of a half-zebra-half-giraffe creature, European explorers dismissed it as myth. It wasn’t until 1901, when locals helped Sir Harry Johnston to get ahold of a skin and skull, that Europeans realized the animal existed. Today, we call them okapi (though in typical European explorer fashion, their scientific name is Okapia johnstoni).

People similarly assumed that tales of a Pacific island inhabited by dragons were utter nonsense, until Dutch colonialists went to Komodo island and found not fire-breathing myths, but quite real monitor lizards.

Platypuses skeletons seemed like an obvious hoax until scientists saw the living critters with their own eyes, and mermaid legends were probably the result of sea-weary (and sex-starved) sailors glimpsing distant manatees.

It’s science’s job to investigate these claims—not to throw the evidence back in people’s faces, but to seek the truth. For Lindqvist and her team, the point was never really to “find the yeti,” but to better understand an endangered population of bears that we know little about. Putting the yeti myth to rest was just an added bonus. Not that everyone will be convinced.

“There are going to be people who say ‘okay, your samples prove that those samples are bears, but you can’t prove that there aren’t yetis’,” Lindqvist says. So yes, she admits, we’re never going to be able to 100 percent prove that yetis do not exist, period, end of story. That’s the tricky thing about cryptids. Science simply can’t say that something is definitively untrue. You can’t prove a negative. The absence of evidence is not evidence of absence, and so on. This allows wild theories and preposterous ideas to thrive based on the premise that no one can ever truly say they’re wrong.

But come on. It’s probably bears.

At the very least, the study marks an important contribution to bear research—and that’s really what counts.