Have you thanked a fish today? 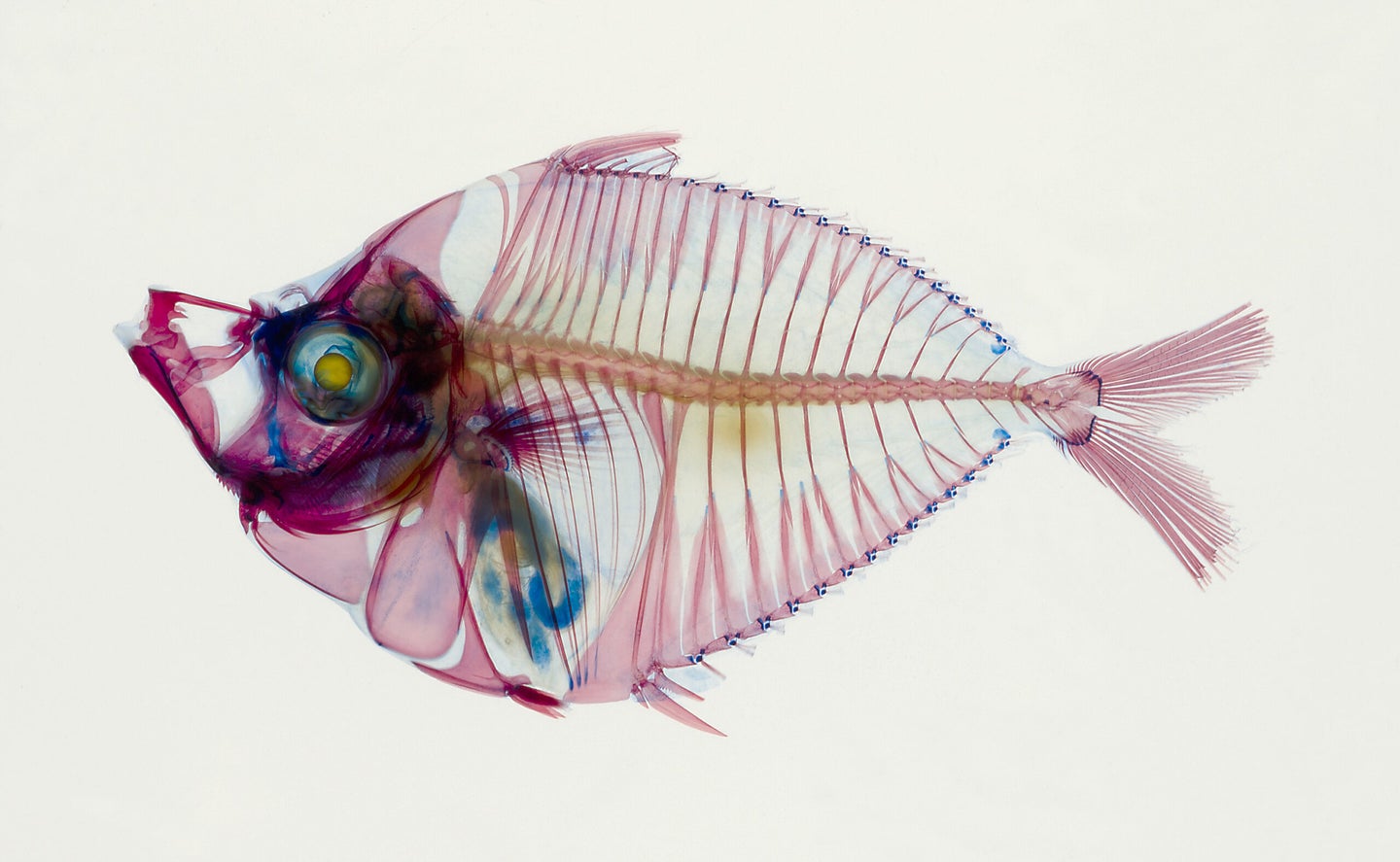 A bioluminescent ponyfish with a light-generating organ in its esophagus. © AMNH/J. Sparks
SHARE

As curator of ichthyology at the American Museum of Natural History in New York, John Sparks spends a lot of time counting fish bones. All day he gazes at tiny skeletons stained in fluorescent blues and purples to unlock new clues about vertebrate evolution.

Turns out, fish bones contain plenty of secrets. Each species has quirky morphological variations that act much like a name tag; anything from the number of vertebrae to the bony cheek structures can give away a specimen’s identity. “I think it’s cool that the skeleton is so informative,” Sparks says. In his 20 years as an ichthyologist, he’s seen a lot of fish—intact and not. He’s traveled to Madagascar, the Indo-Pacific, South America, and the Caribbean to inventory marine and freshwater species. And of course, he’s helped tend to the 2,500,000 or so specimens back at the New York collection.

Here are some of Sparks’s favorite facts about fish bones, people bones, and everything in between.

Humans owe a lot of their skeletons to fish.

Our ancient vertebrate ancestor, the lobe-finned fish or sarcopterygii, had pectoral and pelvic fins that evolved into arms and legs as tetrapods took to land. Though we don’t currently waddle around with fins, the lobe-finned fish’s pelvic girdle made our modern limbs possible.

Less widely known are the shared bony ear structures between fish and humans. As Sparks explains, fishy gill arches evolved into our inner ear bones. Some people are even born with the remnants of gills, which show up as pinpricks above their ears.

Under their scales, fish are wildly distinct.

Fish show more variation in their bones than birds and lizards, Sparks says. That’s why there’s less morphological research on those other animal groups—their skeletons are relatively uniform. In contrast, fish have different skeletal features throughout the evolutionary tree, in part because they’re found in a myriad of niche habitats. This is somewhat of a boon for scientists like Sparks: When he finds an undescribed species of eel in Madagascar, for instance, he just counts up the vertebrae and measures the ratio of its spines to its rays. Then, he can compare it to similar species and chart its pedigree.

Another way to classify fish is by checking what they don’t have. Most ray-finned fish, for instance, lack a tooth plate within their mouths (though there are some exceptions in Madagascar). This crucial difference points to divergent evolution, where species adopt fresh features and lose old ones based on what their surrounding call for. By shedding some of the bony structures in their mouths, species were able to branch out and eat new types of prey. Sparks has even noticed that cichlid fish in the African Great Lakes have subtle differences in their jaws, possibly because they forage algae at different depths.

As fish approach the ocean floor, they “melt.”

Deep-sea species tend to look “blobbier” than their relatives at the surface. Pressure increases with depth, Sparks says, so bottom feeders fill up their bodies with water to keep from going splat. This gives them a more jelly-like consistency, offset by a few cartilaginous bones. Through evolution, deep-sea fish have also lost or minimized structures like gas bladders.

Some fish give off a special glow with their bones.

Bioluminescent fish are like the lava lamps of the ocean. And though their special-effects methods vary, bones are often part of the recipe, Sparks says.

Take the ponyfish or leiognathidae: It emits light through an organ in its throat, and thus has thinner bones to enhance the effect. Meanwhile, some glowing sharks use tooth-like scales called denticles to key up their shine. The molecules within these scales catch blue photons and shoot out green ones, giving the animals their neon, mermaid-ish sheen.