Long cast as the enemy, sharks are really losing this war, as men arm themselves with shark guns, shark repellent and fish the bejeezus out of these misunderstood monsters 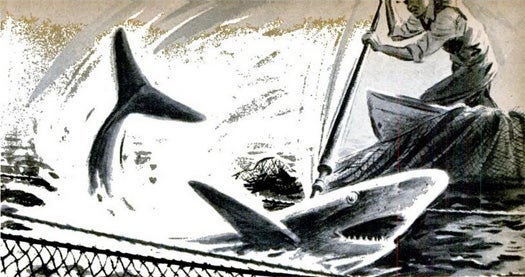 The Olympics ended on Sunday, but if we know our readers, many of you were still glued to your televisions as the Discovery Channel’s Shark Week began, with hours upon hours of programming dedicated to these fearsome, fascinating creatures. We at PopSci have to confess to being equally intrigued by sharks, an interest that has continued throughout history.

Though, the farther back you go in our archives, the more our shark coverage seems less like scientific curiosity and more like bloodlust. We were only too happy when shark skin started being turned into leather, for example.

In more recent history, though, the author of “Jaws” wrote a story for us that cast sharks not as the villain, but as a misunderstood monster that is just as afraid of us as we are of it. And lately, our weapon of choice for protecting ourselves against shark attacks is a harmless electronic repellent, not a combination harpoon/shotgun.

You can see all this and more in this week’s archive gallery: a look back at our strained, but evolving, relationship with these toothy terrors of the sea.

Plenty of misunderstanding surrounds sharks, or the “wolves of the deep,” as we so elegantly called them in this 1917 article that attempts to clear up some of the misconceptions. When people are afraid of something, that fear can sometimes blind them to the truth, as anyone who’s seen “Beauty and the Beast” can tell you. In this case, the truth still makes one a little uneasy. For instance, through the advance of underwater photography, we were able to learn that, contrary to popular opinion at the time, sharks do not turn over when attacking so as to more easily bite with their “receding underjaw.” If you’re being attacked, that fact will likely provide little comfort. Humans are just as dangerous to the sharks, though. This article describes an “ingenious method” that allows sharks to be “caught and killed in large numbers:” mounting several rotary wheels to the side of a boat, each of which carries a large, baited fish hook attached to a long, insulated electric cable. The photo to the left is evocative of this struggle between man and beast, and as I could never do the caption from the magazine justice, I will just paste it here: “A shark weighing 800 pounds and more than twelve feet long caught by Mrs. Otto Jaeger at Palm Beach. It was caught with a rod and reel but had to be shot with a heavy caliber rifle.” The article provides no further context.

In besting an adversary as worthy as the shark, we feel a certain sense of smug satisfaction. In this case, people wore the spoils of victory on their feet. At the time we wrote this article, PopSci wasn’t feeling particularly conservationist about the whole thing, as demonstrated by the bloodlusty language we used to describe the shark leather: “We can now sit back and smile with satisfaction at the sight of these tigers of the sea expiating their crimes by cutting down the cost of living. The shark is no longer our implacable enemy. It is a servant that will supply us with uncountable millions of feet of leather.” To make these wearable trophies of war, fresh shark skins were first soaked in a brine bath for eight days, salted for three to five more days, then packed in sugar or flour barrels. They are then subject to a tanning process that involves bathing them in water, slaked lime and hydrochloric acid, oiling them, coloring them, polishing, bleaching and rubbing them with skimmed milk, which apparently makes them “very supple.”

Our cartoonist illustrates the size of “probably the largest creature that ever lived,” the carcharodont shark. “There was room enough in this ferocious monster’s maw for a foursome of bridge,” an image that is quirky and humorous only because the carcharodont’s extinction ensures that it can never take its vengeance for being so caricatured.

Shark fishing was a lucrative business during wartime, especially “after the German occupation of Norway cut off our main source of cod liver oil.” Which, really, is that what we should be focusing on? Either way, our concerns were put to rest when researchers realized that shark liver oil has an even higher vitamin content. We began giving it to pilots to aid their night vision. Like the proverbial buffalo of old, though, the rest of the shark didn’t go to waste. The skins were made into leather, as discussed earlier, teeth and vertebrae were made into stylish jewelry for sun-bleached surfers, fins were made into soup, flesh was canned for food or turned into fertilizer, and physicians made serums from the pituitary gland. With the liver cashing out at $10/lb, and money to be made off the rest of the shark carcass, fisherman started dropping 1,000 foot chains laden with dangling hooks into the ocean, often catching six to 10 sharks per line. “Most of them are already drowned, but an occasional tiger shark will come aboard with plenty of fight in him and will have to be quieted with a crowbar.”

When sharks aren’t a fisherman’s intended quarry, they can be quite a nuisance if they are trapped in a net. Sometimes they destroy the net and release an entire catch of fish, leaving the fisherman to watch their money swim out to sea. Not satisfied with just a harpoon or a shotgun, industrious fishermen combined the best features of both to create this shark gun, which only fires on direct contact with its target, and therefore can’t miss. A pipe reducer coupling holds a 12-gauge shotgun shell in place, and a double-ended spike held in with a spring completes the setup. When contact with the shark forces the spike back, it hits the the shell’s percussion cap, firing it into the belly of the beast. Or the head.

John Fenton’s deep sea dive to test an underwater movie camera soon turned into a briny battle worthy of the silver screen when he encountered an irritable nurse shark and thought it a good idea to pat it on the head. The shark chomped at his arm, but luckily only caught his sleeve, and Fenton was able to fight back, killing the shark with a knife. The good news is, the camera worked perfectly, and caught the whole thing for our horror and enjoyment.

PopSci finally answers the question on everyone’s minds–“Do sharks attack people?”–though perhaps it wasn’t the answer we wanted to hear. “They do.” Of course this answer comes with a boatload of caveats, pun absolutely intended. Harvard’s Bill Schroeder debunked the myth being perpetuated by many, including some skin divers, that sharks are essentially harmless to humans. “Of course, I don’t say that all species of sharks attack men,” Dr. Schroeder said. “Most don’t. Not even all the species known popularly as man-eaters are suspected by scientists of being dangerous. But there’s always a bad actor that comes along.” The baddest of the bad actors is the white shark, whose presence near Sydney, Australia makes its beaches some of the most dangerous in the world. Aside from humans, some strange things have turned up in the stomachs of great whites, including sea lions, horse meat and even an entire Newfoundland dog with its collar still on. Even with that alarming piece of information, our article reassures readers that their chances “of being bitten on any American beach are very very remote.”

Perhaps the biggest culprit of instilling fear of sharks into humanity is Peter Benchley, the author of “Jaws,” the book that spurred the movie, and subsequently, the pulse-quickening song that would forever be associated with shark attacks. But as it turns out, he no longer believes sharks are so bad. A few years after “Jaws” was published, Benchley encountered a great white while diving in the Bahamas. One of the two creatures was literally scared shitless by the chance meeting, but it wasn’t Benchley: “The shark froze, too. And then, abruptly, frantically, implausibly, the great white wheeled around, voided its bowels, and disappeared in a nasty brown cloud.” Though Benchley says his research for the book reflected the wisdom of the times, by the 90s we knew that only 10-12 of the 368 known species of sharks had ever been known to bother humans, and the attacks were often accidental–a human on a surfboard looks remarkably like a sea lion from underwater, apparently. Also, all those years of casting them as our enemies (which, as you’ve seen in this gallery, PopSci was also quite guilty of) resulted in untold millions of dead sharks. “For every recorded attack on a human being, more than four million sharks are destroyed by human beings.”

As humanity and technology evolve, we begin to realize that perhaps there are better ways to protect ourselves from shark attacks than by killing millions of sharks. Enter the Shark POD (protective oceanic device). Two electrical transmitters powered by a nickel-cadmium battery attach to a diver’s oxygen tank and fin. The on-off switch straps on to the diver’s chest or wrist, with an LED light showing when the power is on, or the battery is running low. When activated, the transmitters “generate a low-voltage electrical field that extends 12 to 20 feet from the diver in all directions, aided by the natural conductivity of salt water.” It’s unclear what exactly about the electrical field irritates sharks enough to make them turn tail, but scientists think it might be the pores on their snouts that sharks use to detect low-voltage electrical signals, like a fish’s heartbeat, when hunting prey.

Fabien Cousteau, grandson of Jacques, hid inside a robotic great white shark for more than 100 hours to shoot video footage for a documentary on shark cognition, in order to catch “purer behavior” than he would have if he revealed himself in human form. “My hope is that they think ‘Hey, that looks like my retarded cousin from Australia!'” he said. It seemed to work. Cousteau, using the shark-shaped submarine wittily nicknamed “Troy,” was the first person ever to capture a female shark attacking another female on film.