Wild turkeys are in trouble

And this time hunting and clear-cutting aren’t to blame. 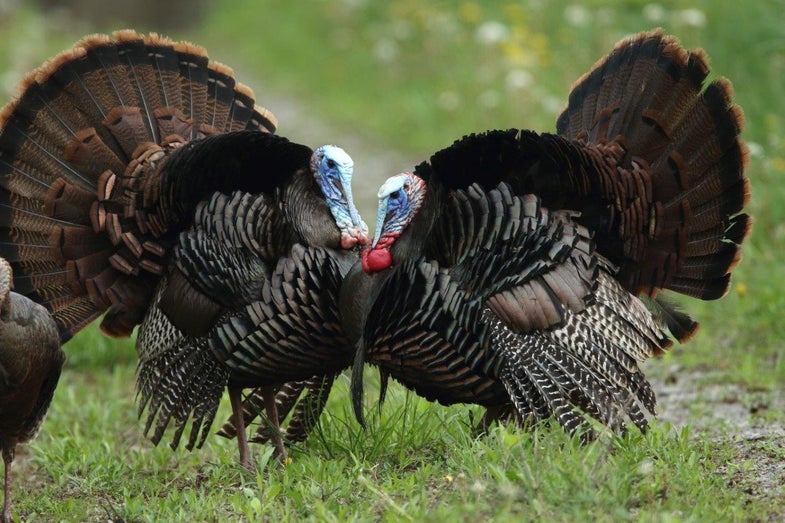 Wild turkeys are in a bit of a bind.

The birds were nearly wiped out by hunters and habitat destruction by the early 1900s, but made a comeback thanks to conservation efforts in the 20th century. Yet for the past 15 years or so, turkey populations have again started to fall across much of the United States.

These turkeys are the same species as the birds that might grace your Thanksgiving table, although they’re much tougher. Wild turkeys can sprint as fast as a galloping horse and fly even faster. But it seems that they might need a little human help once more.

“The population was on such a rise, it had such momentum for a long period of time that as managers we didn’t see it coming,” says Mary Jo Casalena, the Pennsylvania Game Commission’s wild turkey biologist. “We didn’t see that we were peaking on the rollercoaster, and now we’re starting to come down.”

Now, biologists are investigating how habitat loss, climate change, and other woes are driving this newest decline, and how to replenish the wild turkey’s numbers.

The 19th and early-20th centuries were a rough time for wild turkeys. No game laws existed to prevent overhunting. “There was nothing against taking out an entire flock,” Casalena says. Meanwhile, vast swaths of the landscape were cleared to make way for agriculture, and to provide timber and wood to feed iron furnaces.

By the turn of the century, the population plummeted to less than 1 million birds nationwide. In many states, wild turkeys vanished entirely. Only a few remnant populations remained in remote areas, like central Pennsylvania’s Ridge and Valley Province. “Once you get up on those forested ridges it’s pretty darn rocky and rugged,” Casalena says. “Those were the last stronghold of the wild turkeys, simply because those ridges were too rugged for us to timber and obviously too rugged for us to farm.”

Around the 1940s, the turkeys’ luck started to turn. Wildlife agencies began to set hunting seasons and bag limits to protect the birds. The forests that had been chopped down began to grow back, and many farms abandoned during the Great Depression reverted to shrubland, making ideal territory for turkeys.

“We used to think that turkeys were birds of the big woods,” says Michael Schiavone, head of the New York State Department of Environmental Conservation’s Game Management Section. But actually, turkeys do best with a mix of mature trees to roost in at night, overgrown fields, and young forests. “The stuff that you probably don’t want to walk through is what turkeys want to nest in,” he says. “That tangle of greenbrier and other young saplings is really good nesting and brood-rearing cover.”

Turkeys slowly began to return to the increasingly wild lands. Starting in the 1950s, conservationists helped the birds along by capturing turkeys from areas where the population was starting to recover and relocating them to unoccupied territory.

“After restoration was done, turkey populations really exploded through the 1990s,” Schiavone says. “The wild turkey restoration is really one of the success stories in wildlife conservation.”

The wild turkey population peaked around 2001 at around 6.7 million birds in North America. But in the years since, it has dropped by about 15 percent. The eastern wild turkey—the most abundant subspecies, which reigns east of the Mississippi River—appears to be declining across parts of the Northeast, Southeast, and Midwest.

In New York, hunters in the western part of the state were the first to notice the difference. “They were saying, there’s just not as many turkeys around as there used to be,” Schiavone says.

Under the right circumstances, turkeys can lay plenty of eggs and see many of their progeny survive to adulthood. But wildlife biologists in Pennsylvania are often counting only two young turkeys per hen making it to the fall, Casalena says. “They’re barely replacing themselves.”

Some dip in the birds’ numbers isn’t surprising, Schiavone says. During their heyday, the turkey population likely boomed beyond what the landscape could support long-term. But the birds face a number of new threats that have wildlife biologists worried.

The landscape is changing, and the birds are struggling to find the right kinds of shelter and food. Many of the young forests where turkeys like to nest and raise broods are now maturing into open woodlands. For young birds and their mothers, that means less cover from predators and the elements. When Department of Environmental Conservation researchers tracked radio-tagged hens, they found they were most likely to die during the warm months. “What’s driving population changes, we think, is that high mortality during that summer nesting and brood-rearing season,” Schiavone says.

Another problem for turkeys is that the woods don’t look like they once did. In the wintertime, turkeys are used to relying on hard nuts like acorns and beechnuts. But the trees that produce this vital food source are becoming less common, partly because of ailments like beech bark disease and grazing from pests such as invasive gypsy moths and rampant white-tailed deer.

Turkeys are also bedeviled by predators like bobcats, coyotes, fishers, and raccoons, which have become more abundant and widespread in recent years, Casalena says. An epidemic of rabies that tamped down predator populations in the 1990s has also eased.

Climate change is also causing turkeys trouble. “We’ve already seen the effects that it’s had on our wild turkey populations,” Casalena says. As severe storms become more frequent during springtime, hens and their offspring are more likely to perish.

Foul weather can destroy a nest or wipe out vulnerable young turkeys. Torrential downpours also make a nesting hen more obvious to predators. “When a hen gets absolutely soaked from the rain, then she becomes more smelly and it’s easier for a predator to find her,” Casalena says. Young turkeys, or poults, also become an easy snack. “If you’re a cold, wet poult, you’re going to be miserable, and you’re going to be making a lot of noise.”

Scientists recently discovered another potential stressor: Lymphoproliferative disease virus. The tumor-causing condition is found in around 55 percent of wild turkeys in New York State. However, many infected adults seem to display no symptoms. “It seems like healthy birds can carry the virus and be fine,” Schiavone says. This indicates that the disease may not be having much of an impact on the population.

It’s less clear if the virus is a problem for younger turkeys. That’s because when a poult does succumb to illness, researchers are unlikely to know about it. “It’s kind of hard to find a dead poult on the landscape, because something’s probably going to eat it,” Casalena says.

Wildlife agencies are determined to give the wild turkey a second revival. They’re restoring turkey habitat by clearing spaces for young forests to grow anew and helping private landowners to make their territory more hospitable to turkeys.

Turkeys aren’t the only birds to be suffering from the lack of young forests, Casalena says. Other game birds like ruffed grouse and songbirds like the golden-winged warbler are declining as well. Refurbishing the turkeys’ homelands would help these other species.

This time around, overhunting is not to blame for the wild turkey’s dwindling numbers. But hunting can still put pressure on a vulnerable population, so researchers have also been investigating how best to adapt the spring and fall seasons. “We had to figure out what the new normal is in New York and have a season that reflected that,” Schiavone says. In 2015, the state restricted its fall season to two weeks and introduced a one-bird bag limit.

Schiavone and his colleagues surveyed hunters to find out what they hoped to get out of the season, and found that they share wildlife biologists’ worries. “Hunters value seeing and hearing birds more than anything els. Their major concern is turkey abundance,” Schiavone says. “Secondarily, they want a chance to go afield and be in the woods, and the third thing they want is to actually kill a bird.”

Still, making sure that hunting seasons are sustainable has been a challenge, Casalena says. “When the turkey population was rising so rapidly, it really didn’t matter what our seasons were,” she says. “Now we’re realizing that we have to be a lot stricter.”

This could mean pushing back the start date for spring hunting. Only males, or gobblers, can be taken during this season, but hunters sometimes shoot females accidentally. Waiting a little longer gives females more time to settle down and incubate their eggs, leaving them less likely to flee the nest or come to a hunter’s call. In Pennsylvania, the spring season doesn’t open until midway through the period when hens are likely to be incubating their eggs, Casalena says.

Even with human assistance, it’s unlikely that wild turkeys will ever return to their peak numbers. “I don’t know that we’re going to get back to those 2001 population levels, but I definitely think we can improve,” Schiavone says.

Casalena hopes to see the wild turkey population stabilize and increase again over the next 20 years. “Luckily we’re not talking an endangered species,” she says. “We have plenty of time.”