A rare addition to the great ape family. 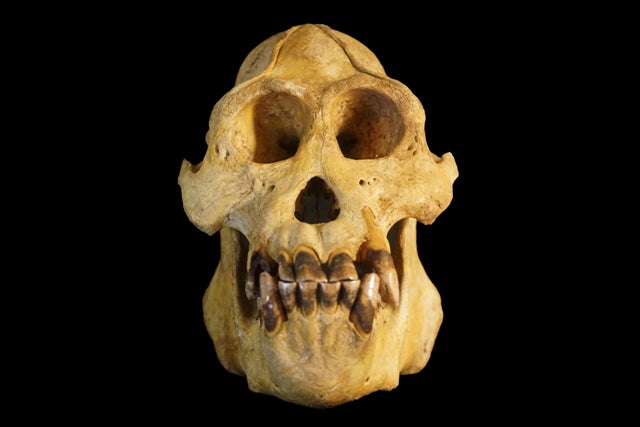 Not every announcement of a newly discovered species feels like a huge deal. Thousands of new critters get their names in print every year as they are catalogued and confirmed by scientists. But most of those are insects, or tiny frogs, or blobby, mysterious creatures from deep below the sea. Most of the organisms that have eluded scientific detection are, well, elusive, so most of them are small or incredibly alien in their habitat. But this week, researchers made an announcement that hits unusually close to home: for the first time in almost a century, we’ve added another great ape to the family. According to a study published in Current Biology, a small group of individuals in Sumatra represents a third, previously unknown species of orangutan. While everyone loves finding a dozen hitherto unknown kinds of beetles, Pongo tapanuliensis is worthy of just a tad more excitement. The Tapanuli orangutan marks just the eighth living member of the great ape family—our family. It’s just us, bonobos, gorillas (eastern and western), chimpanzees, and three species of orangutan. Orangutans shared a common ancestor with humankind just around 11 to 16 million years ago, making them our (relatively) close cousins. In fact, their physical similarities led one study to suggest that it was orangutans—not chimps and bonobos—that serve as our closest relatives. (This is not a prevalent theory, to be clear, and the genetic evidence is against it; it just goes to show you how much we have in common with even our more distant ape family members.)

Of course, when scientists report the “discovery” of a “new” species, they usually mean that academics have finally got wise to an animal that’s been kicking around for quite some time. That’s the case here: people living in Sumatra had interacted with these creatures extensively before this paper was written. In fact, the authors were finally able to examine the species closely enough to declare it unique because villagers alerted them to the presence of an injured orangutan—it was badly beaten after trying to pick fruit from a local garden.

We knew there were orangutans in Sumatra, and that some of them were isolated from the others, living in the Batang Toru forest. There were already reports that they looked and lived a little differently from the larger orangutan group on the island. The Atlantic’s Ed Yong reports that as of 2013, there was even evidence that their genes were distinct.

But it took a more thorough genetic analysis to confirm that the apes are indeed their own species. It seems that the 800 Batang Toru orangutans split off from the larger Sumatran population over 3 million years ago. They’re actually more related to the other orangutan species—the one living on the nearby island of Borneo—having only split from them about 700,000 years ago. If you’re wondering how the related apes got from Sumatra to Borneo, note that primates had to cross from Africa to South America at some point around 40 million years ago. Researchers think they were likely carried out to sea on uprooted trees. There’s evidence of other, more recent primate swashbucklers as well. A couple hundred miles of ocean are no match for a half-drowned ape equipped with a floating raft of debris.

There was some interbreeding between the various species of orangutans—lots of it until 100,000 years ago, and a bit of it until 10,000 years back—but they’ve stayed separate enough for long enough to become their own thing. Of course, the announcement is sure to stir up the ever-ongoing debate of what exactly a species even is. Most of us learn in school that a species is defined by its members’ ability to breed with one another, but this is a rule that’s broken all the time. When animal populations start to speciate—that is, diverge from their genetic commonality—because they’ve been separated for a long time, some might argue that we should instead call them subspecies. How different does one group have to be from another to get its own label?

“Any bunch of expertised biologists can invent a new species, if they get their arguments together,” Volker Sommer of University College London told The Guardian. It might seem silly for taxonomists to argue about what we call one thing or another (Pluto, as a dwarf planet, is no less important than a planet) but there’s a reason to care: if something is classified as its own separate species, it can be protected as its own separate species.

If 800 orangutans doesn’t sound like the most stable of populations to you, you’re absolutely right. If Pongo tapanuliensis is truly distinct from the other two species of orangutan, then it boasts the smallest population of any of the great apes. Nature reports that a proposed hydroelectric dam could split the population in two. And two groups of 400 is even weaker than one group of 800; the fewer animals you have in the gene pool, the less genetic variety you have to work with should any problems arise. If a particular pathogen strikes the animals, for example, they’ll only survive as a species if some individuals happen to be resilient, and are able to keep breeding.

“It’s very worrying to discover something new and then immediately also realise that we have to focus all of our efforts before we lose it,” study co-author Serge Wich of Liverpool John Moores University told the BBC.