A look back on some of the rover’s best moments over this last Earth year. 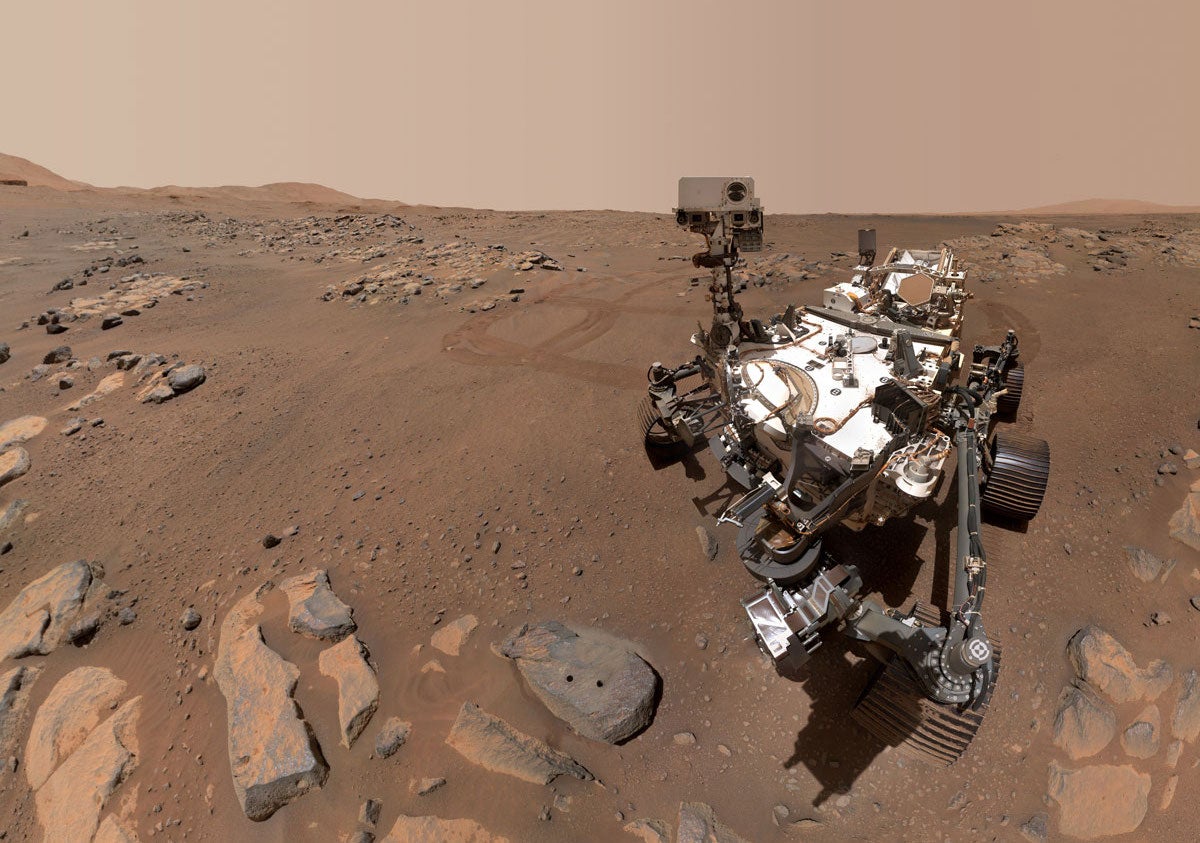 Huzzah! Perseverance has made it through one Earth year on the Red Planet. NASA/JPL-Caltech/MSSS
SHARE

Perseverance has officially survived a year on Mars.

And what a year it’s been, filled with first flights, first digs, first “breaths,” and first meltdowns (don’t worry, it’s all good now). Living up to its name so far, Perseverance keeps zooming along to fulfill its scientific duty. The mission is still one giant experiment, as NASA engineers continue to test and calibrate the sedan-sized rover and its store of instruments.

“It is what I call the ‘land-iversary,’” Jennifer Trosper, Mars 2020 project manager, said during NASA Jet Propulsion Laboratory’s anniversary livestream mission recap on Thursday. “When we were getting ready to land Perseverance, we were four for four for rovers, and we just know that Mars can always hand us something challenging. So even though we were confident, we were humble.”

Percy—as many have come to call the robot—is not the first machine to freely roam the Red Planet. NASA has been sending rovers to Mars since 1997, and the Soviet Union landed two tethered probes there in the ‘70s. But as with any new space mission, the technology on Perseverance marked a drastic improvement, even compared to its most recent predecessor, Curiosity. The 11-year-old vehicle is still running down Mars rocks, though at a location thousands of miles north of Percy’s station at Jezero Crater. China also landed a rover, Zhurong, on the Red Planet in 2021: Its mission is to explore the plains in the planet’s northern hemisphere, while taking plenty of selfies and sound clips.

As Perseverance hunts for microbial life around a billions-year-old lakebed, the Mars 2020 team is analyzing the raw data it transmits back to Earth. It will be several more years (at least 2030) until they can get a hard look at the soil and stone samples, which will be picked up during a future landing. But Percy is built for long-term science—its power reserves should last another 13 Earth years, or 6.9 Mars years. without refueling. That’s plenty of time for it to uncover the massive pockets of water allegedly hiding under the Red Planet’s surface.

To celebrate the rover’s milestones so far, NASA is hosting a livestream with Mars 2020 engineers this afternoon. But first, let’s reboot our Percy memories with some of PopSci’s top moments.

The big send off

Percy took off from Cape Canaveral on July 30, 2020, on an Atlas V-541 rocket. The launch date was set for when Earth and Mars’s orbits matched up to make the flight between the two planets shorter and easier. The rover was packed with a four-pound helicopter (more on that later) and seven imaging and measuring instruments, making the entire payload worth more than $3 billion. Thankfully, the departure from Earth was a success: Eight hours into the flight, the capsule holding the robot and its accessories broke off from the Atlas and sped toward Mars.

Nearly half a year later, Percy arrived in the Mars’s atmosphere, ready to join its fellow rover Curiosity on the ground. NASA engineers knew the landing would be a challenge, as the spacecraft had hit speeds of more than 12,000 miles per hour during its interplanetary trek. (They even nicknamed the process “the seven minutes of terror.” But the many months of simulated practice in the lab helped: The parachute-assisted descent went smoothly, and around 4:05 p.m. EST, Percy rolled out on the Red Planet’s surface and took its first high-res color images.

The Mars 2020 team had planned to take Ingenuity, the first-ever off-planet helicopter, on its inaugural flight on April 11. But perfecting the speed of its rotors proved a challenge. After all, no one had ever floated an aircraft through Mars’s thin, CO2-filled atmosphere. On April 19, however, it finally happened: The four-pound, 18-inch-tall helicopter took to the skies for less than a minute. It climbed 10 feet straight up (equivalent to more than 100,000 feet in the Earth’s atmosphere) and came right back down. Ingenuity has since completed 18 flights at various altitudes and trajectories around Jezero Crater.

The Red Planet’s atmosphere is thin and laden with carbon dioxide—perfectly fine for a robot like Percy, but not ideal for humans. If people ever attempt to visit Mars (and make the return trip back), they’ll need to make their own oxygen to breathe and help rockets lift off. That’s why Percy was equipped with a toaster-sized box that sucks in carbon dioxide and breaks it apart, spitting out carbon monoxide and keeping only the oxygen molecules. After the first extraction on April 20, the machine, called Mars Oxygen In-Situ Resource Utilization Experiment (MOXIE), sequestered about 5 grams of oxygen, which would give an astronaut about 10 minutes of breathable air. Even the modest amount of oxygen marks an important milestone for future Martian exploration.

Poking into the first of many Martian rocks

Percy roams over a lot of red rock, but it’s looking for particularly interesting ones that might have once bore ancient microbial life. On September 6 and September 8, the six-wheeled pioneer unfurled its arm to drill its very first rock samples from an igneous, gray slab nicknamed “Rochette.” Leaving behind a small hole punch, the resulting rock cores could contain “little atomic clocks” of radioactive isotopes that the Mars 2020 scientists hope will reveal more details about Jezero Crater’s watery past—and if life was once present there.

The Martian rocks that scientists currently have to study are the ones that have fallen to Earth: meteorites. But Percy’s rock collection is the start of what will be a 30-year mission to collect and later send samples to Earth for study. The Mars Sample Return is a multi-mission project, with Percy at the helm. In September 2021, Percy kicked it off when it drilled into the Red Planet’s surface, placed the sample into a tube, and packed up that precious soil for a future pickup flight. So far, Jezero Crater has been a “slam dunk” for collecting samples for the return mission, Katie Stack Morgan, Mars 2020 deputy project scientist, said during the Thursday livestream. While rovers have gleaned plenty of data by studying rocks in the field, back on Earth, scientists have more tools to process and analyze Mars’s characteristics.

Audio messages from another world

Percy is a selfie queen (in fact, the Mars rovers are notoriously photogenic), but the robot is also a great listener. Over the past year, Percy’s duo of microphones has been capturing the sound of pummeling Martian wind, the clink-clank of the rover’s metal wheels, and the low rumble of Ingenuity as it chops through the air. This symphony of sounds is actually audible data: the pitch, frequency, and way that sound travels informs scientists about the Red Planet’s temperature, density, and the composition of the atmosphere. In October, NASA released an audio diary of the sounds Percy listens to each passing Sol, or day on Mars, unveiling an ethereal soundscape of a world far from home.