A rolling sphere of rods and cables being developed by NASA takes a lickin' and keeps on tickin'. 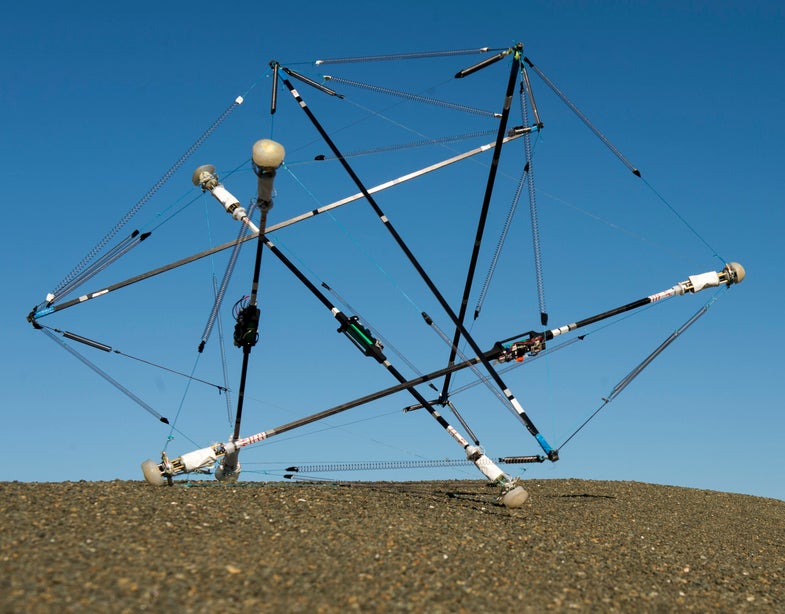 As the Mars Curiosity rover’s “Seven Minutes of Terror” video showed us, landing on a distant world can be extraordinarily difficult. Now scientists are envisioning a robot that could just be dropped from space onto Saturn’s largest moon Titan, a ball-shaped droid that wouldn’t need an airbag to soften its fall, since its entire flexible body is essentially a cushion. Then, after the robot flattened on impact on Titan’s surface, it could roll around like a tumbleweed to explore the alien landscape.

This “Super Ball Bot” is the vision of NASA roboticist Vytas SunSpiral — yes, that’s his real name — along with Adrian Agogino and their colleagues, who plan to have a full prototype by mid-September. In the process of developing this droid, they may have helped pioneer a revolutionary new class of robots.

The Super Ball Bot looks a bit like a cat’s cradle of wires and sticks. Motors, batteries, sensors and electronic control systems located at the ends of the rods can loosen or tighten the tension of the cables. By varying which wires are loose and which are tense over time, the robot can collapse, expand or roll. The robot would suspend its payload of scientific instruments in the middle of its body, and lower them to the ground to analyze surfaces and collect samples when necessary. Wireless communications systems in the robots will allow users to control the droids remotely.

The robot is a “tensegrity structure,” or “tensegrity” for short — a structure that combines elements under tension, the cables, with elements that are rigid, the rods. This structural principle was first discovered by sculptor Kenneth Snelson in the 1940s and explored for use in architecture by inventor Buckminster Fuller in the 1960s. Subsequent research found tensegrities all throughout biology — for instance, the human spine relies on both the vertebrae and the muscles, tendons, and ligaments that surround and support the bones.

“We’re pushing beyond the traditional approach of building rigid robots, where forces magnify around joints and other common points of failure, and relying on tensegrity, which dissipates forces throughout structures, to build cutting-edge robots,” SunSpiral says. “By having a robot that has a very robust ability to absorb forces, you can have a system that both lands and moves, instead of, say, having an airbag you use once and throw away. That saves a lot of mass you would need to fly on a mission, which in turn saves on cost.”

When it comes to Titan, the researchers envision dropping Super Ball Bots that are each covered by a heat shield to protect them from burning up in Titan’s atmosphere. Titan has a surface gravity a little more than one-seventh that of Earth, which means the terminal velocity of the robots — the fastest they will fall in Titan’s thick atmosphere — is about 33 mph, roughly equivalent to the speed reached after a 30-foot drop on Earth. “Early prototypes we dropped could survive that type of impact,” SunSpiral says.

These robots would find it more difficult to survive a drop onto Mars, since the red planet has both a thinner atmosphere and stronger gravity than Titan, meaning they would reach a higher terminal velocity. “But maybe a simple parachute could slow them down enough for a safe landing,” SunSpiral says. “We’re still answering the question of what the highest speeds these robots can land at are.”

Even if any parts of one of these robots breaks upon landing, the fact that each part of a tensegrity is interdependent on the others means that if a few parts get broken, the robot’s other parts can pick up the slack. “We are anticipating that some parts might fail,” says researcher Ken Caluwaerts, a roboticist at Ghent University in Belgium. “We’re developing a distributed system of control so that if, say, a quarter of the motors fail, the structure should be able to continue rolling.”

“You could roll them off the edges of cliffs or down lava tubes.”

The potential robustness of these robots could mean they can take risks traditional robots might not dare — “you could roll them off the edges of cliffs or down lava tubes,” SunSpiral says. Moreover, tensegrity robots can often be packed into compact shapes, which is vital on space missions where space is tight. In addition, the fact that all the control systems of the robots fit into caps at the ends of each rod “means we can build robots of a variety of scales — we can make the robots twice as big or half as small if we wanted to by changing the lengths of the rods,” SunSpiral says.

“This is very fascinating work,” says roboticist Sam Felton of Harvard University, who did not take part in this research. “These tensegrity robots have huge potential, and I’m looking forward to see what other tricks these robots can learn.”

Although tensegrity structures get their strength from how each part is interdependent on every other part, this feature also makes designing and controlling robots with tensegrity structures extremely challenging, SunSpiral says. “Modeling all the way these structures can also interact with their environments is also very difficult,” he added.

To control these biologically inspired robots, SunSpiral and his colleagues have developed a biologically inspired control system. They developed algorithms for controlling the robots that mimic central pattern generators, neural circuits in animals often vital to activities such as locomotion, chewing, breathing and digesting, which would allow the robots to automatically roll “in the same way that you or I can breathe without thinking about it,” Felton says. In addition, the researchers also developed a way for the robots to learn how to roll on their own with the help of evolutionary algorithms, which is valuable for robots operating by themselves on another planet where the rules for movement might differ from those on Earth.

The prototype the scientists are developing is roughly spherical, approximately 35 lbs, and 5 feet across. SunSpiral and his colleagues anticipate having it ready to roll in an outdoor rover test facility by mid-September. But “a great deal more work is needed before this ever becomes a NASA mission,” SunSpiral says.

To help make tensegrity robots a reality, SunSpiral and his colleagues have released the open-source NASA tensegrity robotics toolkit, which is online for free and built on the Bullet Physics engine, a game physics simulator. They are also developing “a low-cost, easy-to-use tensegrity robotics kits to make it easy for people to put together new tensegrity robots, for students and researchers to tinker around with them,” SunSpiral says. “We want to get people around the world exploring this revolutionary concept to help break new ground.” 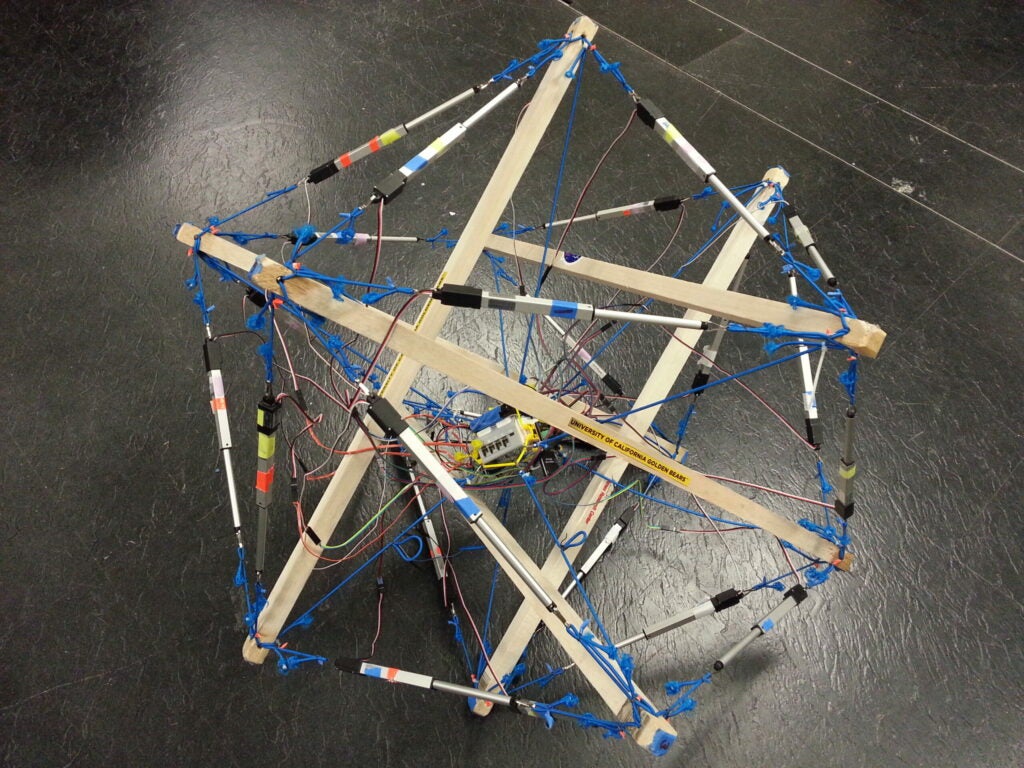