Changing the desert landscape into a microbial oasis 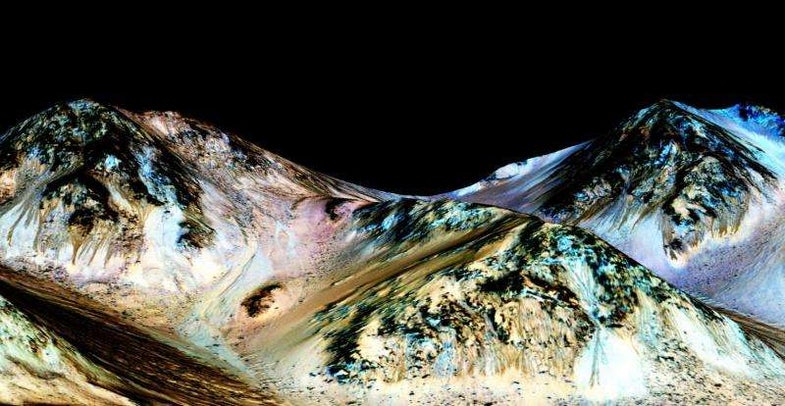 Mars received quite a bit of attention last week as NASA revealed for the first time they found liquid water in brine deposits. Using a combination of spectral readings and computerized analysis, they learned the most valuable chemical to life is not only there, but flowing. This in turn has sparked the debate over whether colonization of Mars and its subsequent terraforming might be more than a speculative fiction dream.

One of the most important needs in terraforming is microbial life. Granted, some people already believe bacteria may exist in that liquid water (perchlorate-respiring organisms, to be exact). But in order to have a sustained planet, a much larger biodiversity would be needed. Thankfully, studies here on Earth focusing on the potential for microbial colonization of Mars have revealed some very interesting phenomena that may one day allow us to be microbial farmers on Mars.

The first hints came over 25 years ago when NASA suggested microbes could survive in specialized niche zones known as evaporites. These areas of crystalized brine would be technically dry in nature but could still have water in the form of hydrated crystals allowing bacteria to grow. In a 2003 study examining such an environment, the gypsum flats of Guerrero Negro, researchers found microbial life living in stasis, just waiting to be awoken with water. This adds credence to the plausibility of life in the Martian brine and the potential for harvesting such microbes for other purposes.

Apart from the brine, microbes are also capable of surviving arid environments such as the Atacama Desert in Chile. This area is known to be a model environment for studying the Red Planet. But not just bacteria are capable of living here; a variety of algae and fungi can also call this place home. The only difference is the occasional presence of high humidity. This suggests there may be a possible route to forming niche environments to grow bacteria in large numbers using only small quantities of water.

Of course, collecting microbes from one area and growing them in another isn’t necessarily going to allow for botanical development. To ensure plants can be grown on Mars, the environment would need to be far more humid and require a significant amount of oxygen. This can be achieved using technology already known to exist such as the Mars In-Situ Propellant Production precursor. But the machine could get quite a bit of help from the microbes. After all, here on Earth, the majority of oxygen pumped into our air is made by microbial species. By creating pools of these creatures, particularly at the South Pole where carbon dioxide is plentiful, the rate of oxygenation can be increased and contribute to the formation of a thickened atmosphere.

As this is all going on, the final use for these microbes would be to resurrect species contained within the subsurface of the planet. Even as early as 1970, researchers have known microbes can survive under the soil in a form of stasis. They have also been found in the subsurface of the Atacama Desert. By getting down into the dirt, we may be able to find these creatures and allow them to interact with the now replenished niche zones to increase biodiversity.

Of course, while all of this may be possible decades down the road, there is one question that still burns: Will it work? Could transforming the Martian desert into an Earthly oasis actually be possible? The answer may have come last week when a Chinese team of researchers revealed what happens at the microbial level when a desert is converted into farmland.

The team performed the experiment in the Gurbantonggut Desert hinterlands of Eurasia. Back in 1990, a certain tract of land has been designated as the target for conversion. Using a combination of irrigation and fertilizer, they began to plant winter wheat and continued to do so for 20 years. In 2011, the soil from this region as well as a sample from the untreated desert region was collected. The group took the samples back to the lab and observed whether there was any change in biodiversity.

As expected, the change in diversity between desert and farmland was incredible. The richness of the desert was nothing compared to the farmland. What was even more surprising was how the change occurred not only at the topsoil level but also in the subsurface. This reveals the potential for a long-lasting change rather than one that may be quickly reverted. From a Martian context, this study suggests within a generation we could see a properly functioning microbial niche environment.

The potential of forming a large-sale terraforming operation on Mars is still decades if not a century away. But the concept of performing niche changes may indeed be possible based on what we have seen on Earth. We just need to realize in order to make this happen, the most important form of life needed to accomplish this goal isn’t human; it’s microbial.