How It Works: A Private Moon Lander 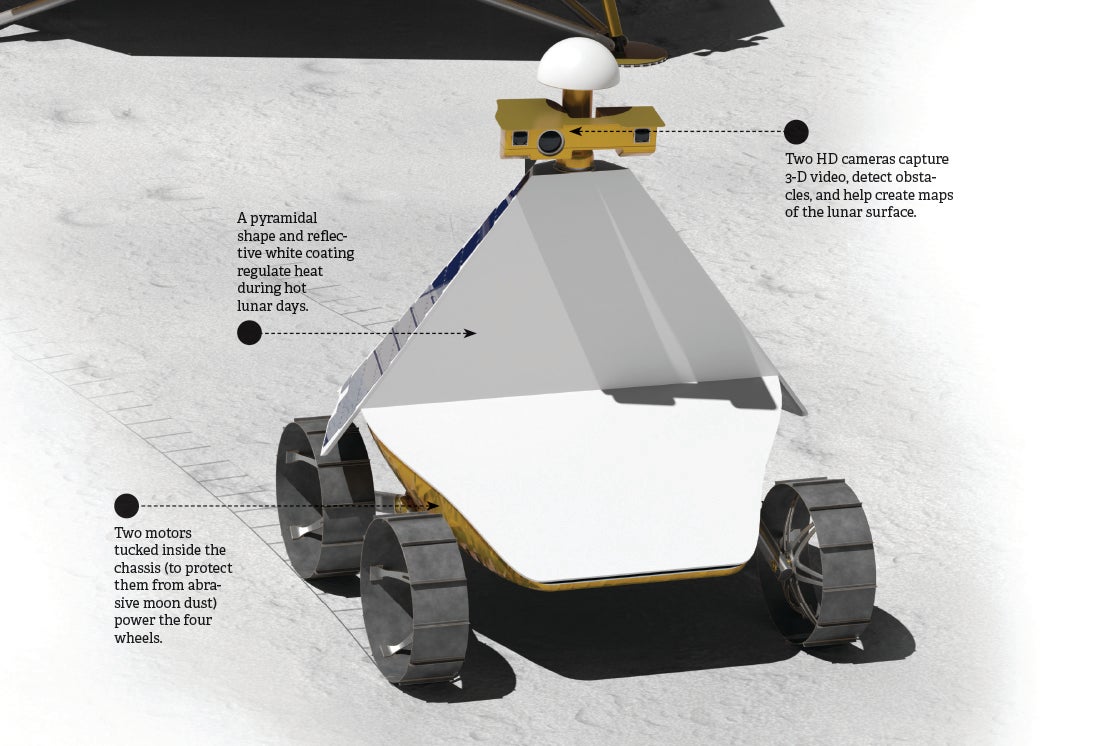 Next year, robots will land on the moon, competing for the Google Lunar XPrize. The contest offers $40 million in rewards, including a $20 million grand prize. Winning is fairly straightforward: Safely land a privately funded spacecraft, move it a third of a mile, and beam back HD-video “mooncasts.” Completing the challenge by December 31, 2015, however, is anything but easy. Organizers have already extended the deadline by a year, and of the 33 teams that initially registered, only 18 remain. Astrobotic, an offshoot of Carnegie Mellon University, survives as a leading contender. The group has finished a two-spacecraft design—Griffin, a car-size lander, and a surface explorer called Red Rover. It has also booked space aboard a rocket that’s scheduled to launch in October 2015. Here’s how Astrobotic plans to take home the prize.

1) REACH THE MOON
A SpaceX Falcon 9 rocket will send Astrobotic’s two-spacecraft stack on a trajectory toward the moon. From there, the four-legged aluminum lander, Griffin, will reach lunar orbit 4.5 days later.

2) LAND SOFTLY
Like an Apollo lander, Griffin will fire its main thruster to slow down and descend toward the moon. Four clusters of smaller thrusters, each fed by four spherical fuel tanks, will make minute course corrections to stick the landing.

3) GET MOVING
Once Griffin safely touches down, Red Rover will drop from the lander’s lower deck and begin its journey. Human drivers on Earth will steer it via joystick while monitoring 3-D camera footage. A passive rocker suspension system will keep all four wheels on the lunar surface at all times, allowing the craft to clamber over rocks and uneven terrain. Red Rover is also programmed to automatically avoid obstacles such as steep crater walls.

4) PHONE HOME
Red Rover will stream photos and video back to Griffin at five megabits per second (equivalent to cable Internet speeds), and Griffin will relay the data to Earth at a one-megabit-per-second clip (roughly as fast as DSL). Future rovers will talk directly to Earth to improve bandwidth—and shorten the laggy 10-second round-trip for packets of data.

Aside from $5 million for second place, teams can claim up to $4 million by completing the following technical challenges: