The Moon Could Be Littered With Fossils From Earth 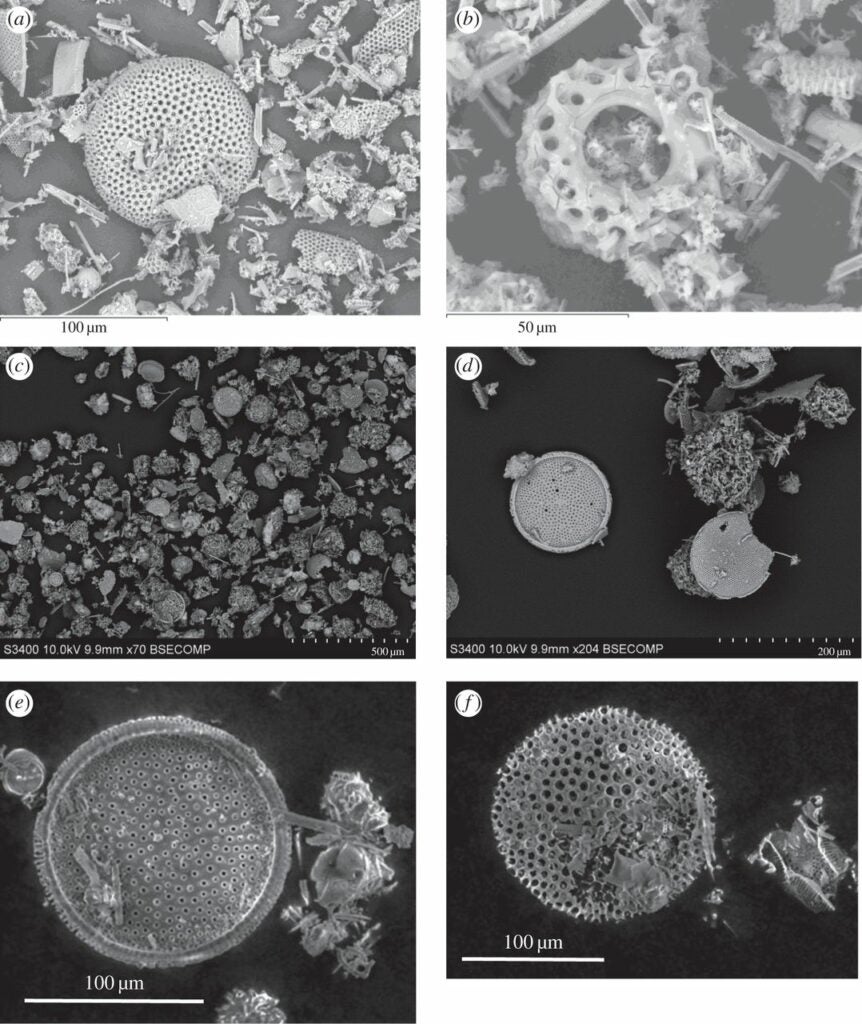 Since 1996, scientists have debated about whether the Martian meteorite ALH84001 contains evidence that life once existed on Mars. The rock holds some microscopic wormy-looking structures that some scientists have suggested could be fossilized remains of life on Mars, whereas others say the weird shapes derive from normal geochemical processes.

There’s some evidence that microbes living inside a rock could be blasted from their home planet, travel through space, and then crash-land on a new planet relatively unscathed. Throughout the ALH84001 debate, scientists assumed fossils could also withstand the grueling journey, but it looks like nobody actually set out to test it—until now.

In a new study, physicists at University of Kent tested the hypothesis with a big gun. More specifically, they took powdered diatoms (a type of microscopic algae with a hard silica shell), packed them inside a nylon bullet, added water, and froze the sample. Then, they loaded the bullets inside a light gas gun and fired them at a sack of water at speeds ranging between 0.25 and 3.1 miles per second.

When they looked in the water afterwards, the researchers analyzed the whole and partial remains of the little diatom fossils. They concluded that small fossils could survive a meteorite impact, and that if they exist, then it’s possible to find them inside meteorites.

But there are a few important caveats. At impact speeds above 0.62 miles per second, none of the diatom fossils survived in one piece—they broke into tiny shards. And the faster they crashed into the water, the tinier the diatom bits became. That’s a problem for any potential fossils that would fall to Earth from other planets, because meteoroids enter the Earth’s atmosphere at speeds between 6.8 and 44.7 miles per second before they hit Earth, according to the American Meteor Society.

The other important limitation is that the diatoms were shot frozen in ice, meaning they potentially behave differently during impact than they would if they were encapsulated in rock.

So the jury is definitely still out on ALH84001, and it probably will be for many years. Even if tests provide stronger evidence that fossils can travel between planetary bodies, it doesn’t necessarily mean they did.

What is pretty neat is that, because meteorite impacts tend to be slower on the Moon, it looks like fossils that have been smashed off from Earth could survive a collision with our natural satellite. The authors conclude that the lunar surface could be a good place to scout for fossils, and those terrestrial transplants may be better preserved on the Moon than if they had remained on Earth.

No word yet on whether a dinosaur fossil could survive the impact. (Dinosaurs on the Moon? That would be crazy awesome.)